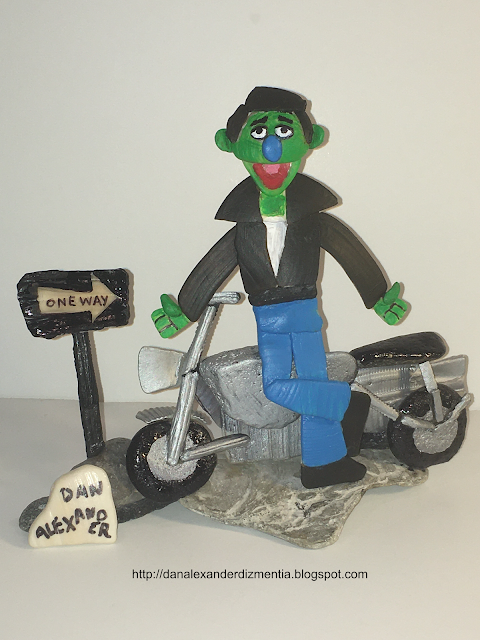 "One Way" is one of my earliest memories of watching Sesame Street as a three year old in 1978.  "One Way" featured a parody of Henry Winkler's "The Fonz" from the TV show "Happy Days" on his motorcycle trying to navigate his way down a one way street.  The song "One Way" was performed by singer and composer Christopher Cerf, who created a great deal of music for Sesame Street.  "One Way" was released on record albums, attributed to Sesame Street's resident rock band, "Little Chrissy and the Alphabeats" (Cerf also performed for these musical Muppets, notably the song "You're Alive").

"One Way" was simply a memory stuck in my head for decades until I finally saw it again on YouTube.

I created Muppet Fonzie, the motorcycle, and the One Way sign using shells, rocks, and other sea junk found on the beaches of Venice, Florida (I used paint and glue, too).

Interestingly, Henry Winkler was speaking at an event for the Tidewell Foundation in nearby Sarasota last month and I unfortunately did not get to go see him.  That would have been cool, like Fonzie.

Posted by Dan Alexander at 3:29 PM No comments: