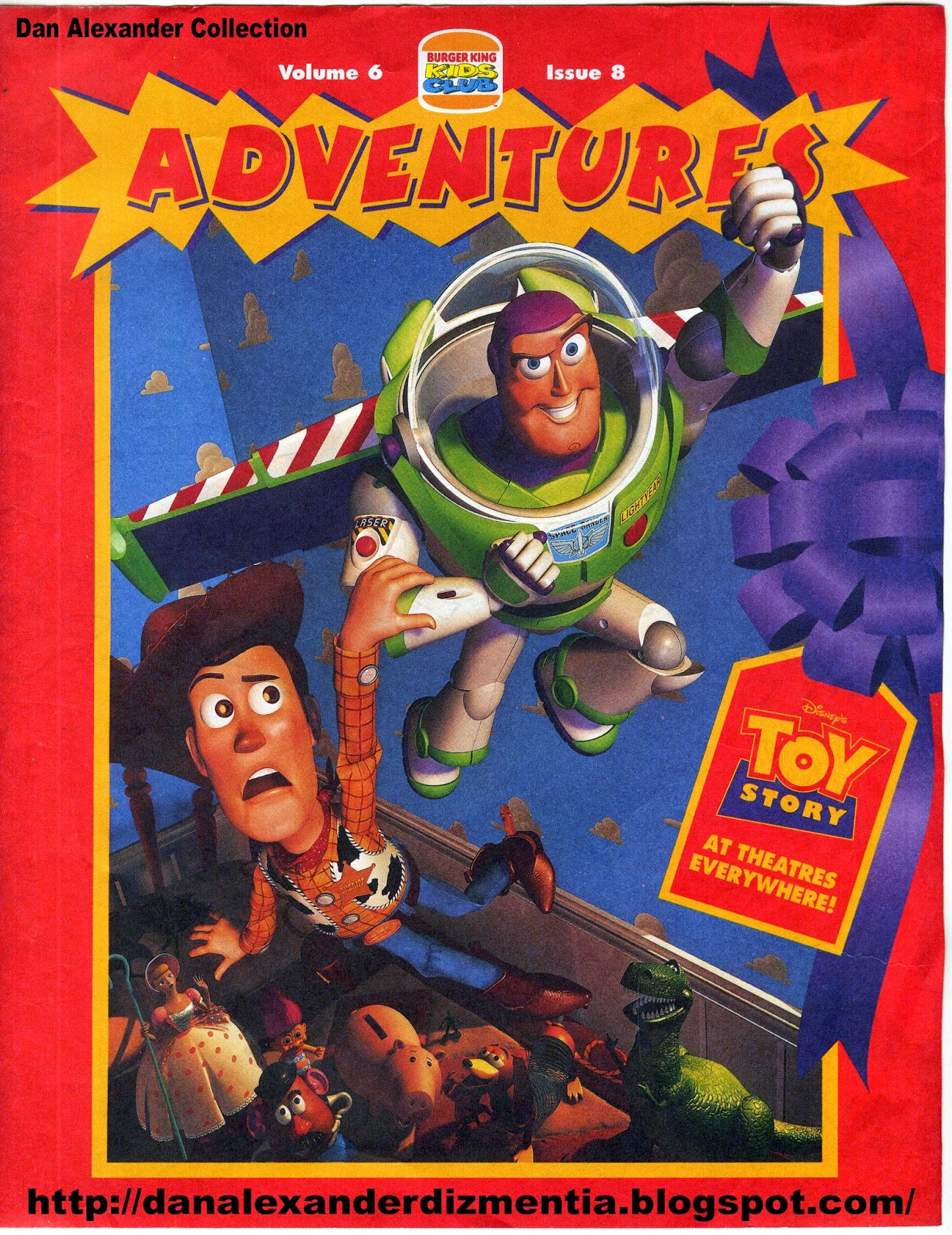 In November of 1995, the groundbreaking PIXAR animated film Toy Story debuted.  Back then, it was known as Disney's Toy Story.  In the United States, Burger King promoted Disney's big animated films, starting with Beauty and the Beast in 1991 and ending with The Hunchback of Notre Dame in 1996.  Outside of America, McDonald's promoted all these films, including Toy Story. 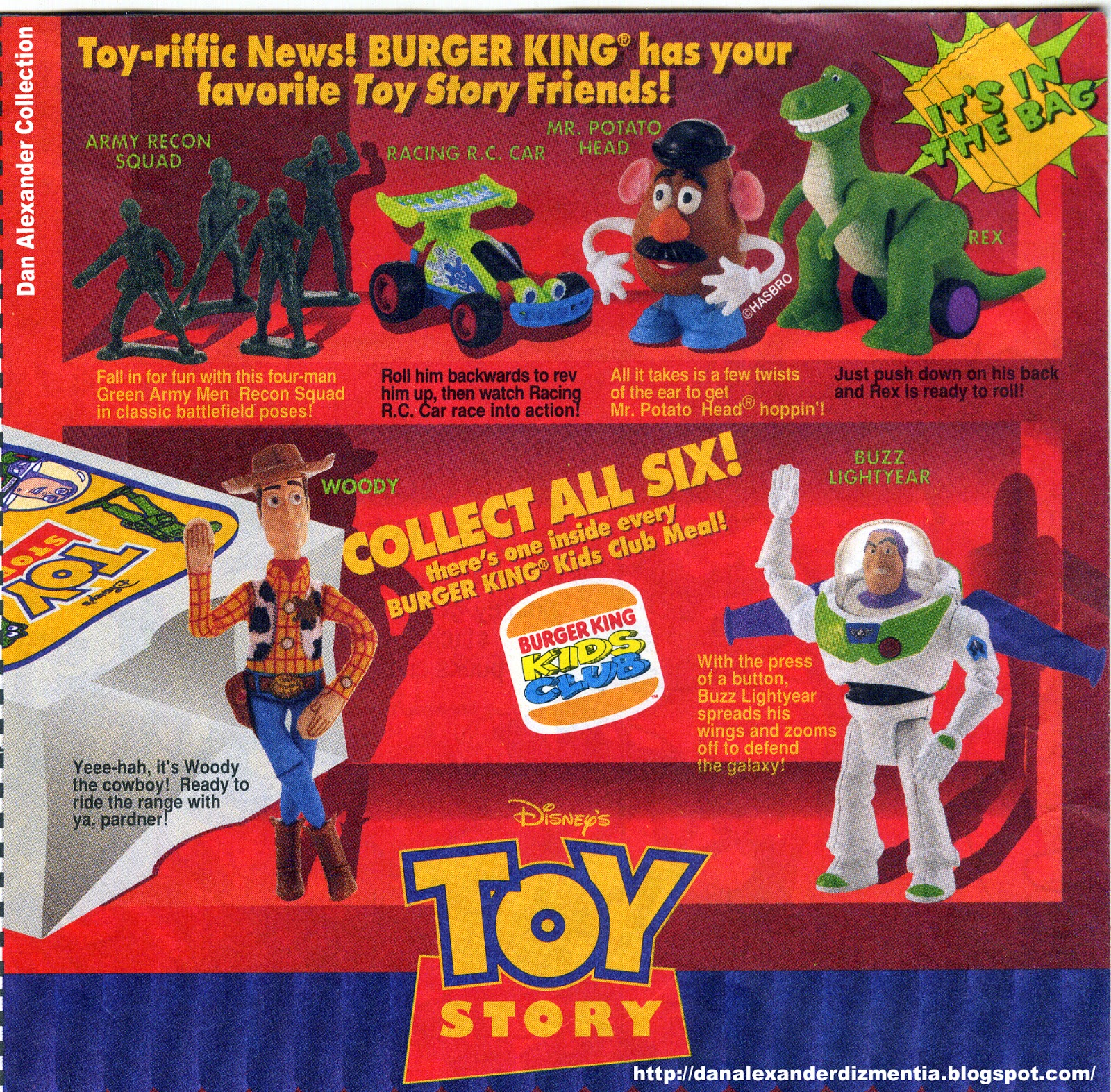 With such a large cast, it is interesting to see which characters were chosen for the promotion.  The Army Recon Squad is a fun and different choice.  I remember thinking the Little Green Men aliens should have been represented.  The Woody premium is worth noting because the head and boots are plastic and the body is cloth (a similar toy was used for Clopin in Disney's The Hunchback of Notre Dame toys sold at Burger King in 1996).  I thought it was interesting that Hasbro's Mr. Potato Head was used rather than another Disney-owned Toy Story character.  Rex the dinosaur has wheels here for some reason. 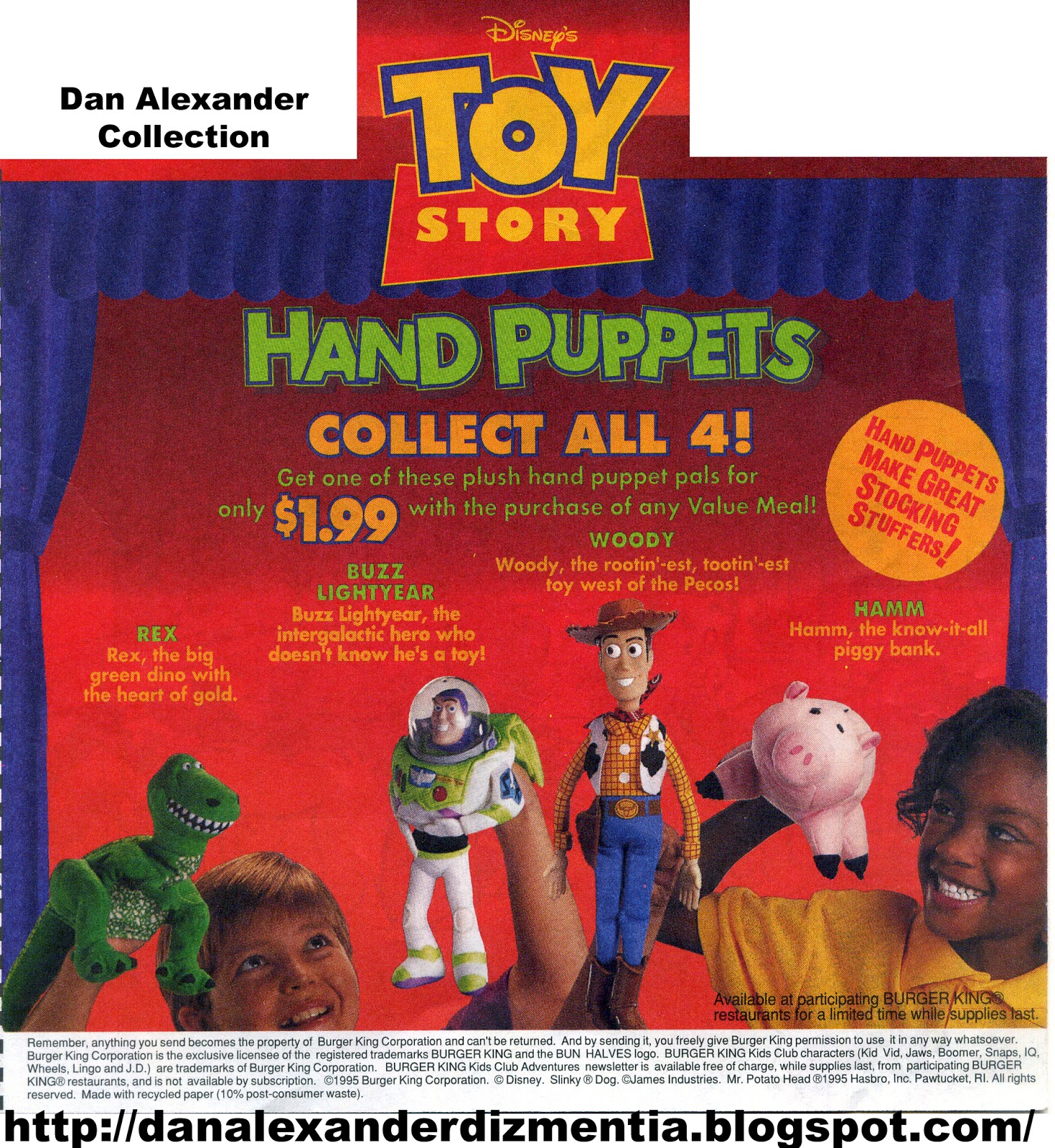 I think the Buzz Lightyear puppet was the toughest to get.  Burger King also sold character puppets for The Hunchback of Notre Dame in 1996.

Computer animated movies are very common today, but in 1995, quite a few Toy Story viewers did not know what kind of film they were watching. 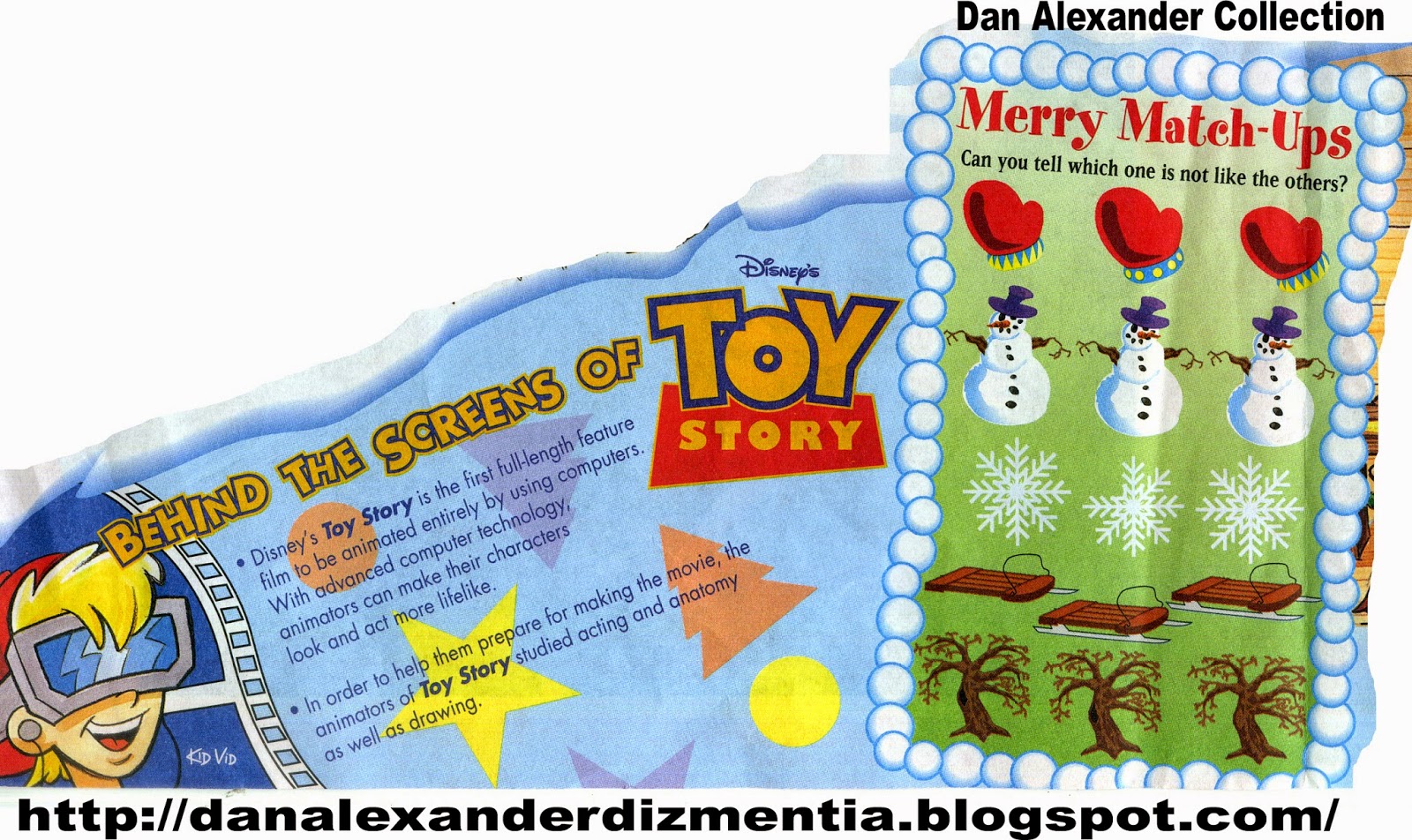 I can remember watching Toy Story in the movie theater, and seeing the trailer for Disney's The Hunchback of Notre Dame.  I do remember thinking that Toy Story was the beginning of the end for hand drawn films.

Naturally, a movie about toys has a good chance of being a big hit at Christmas. 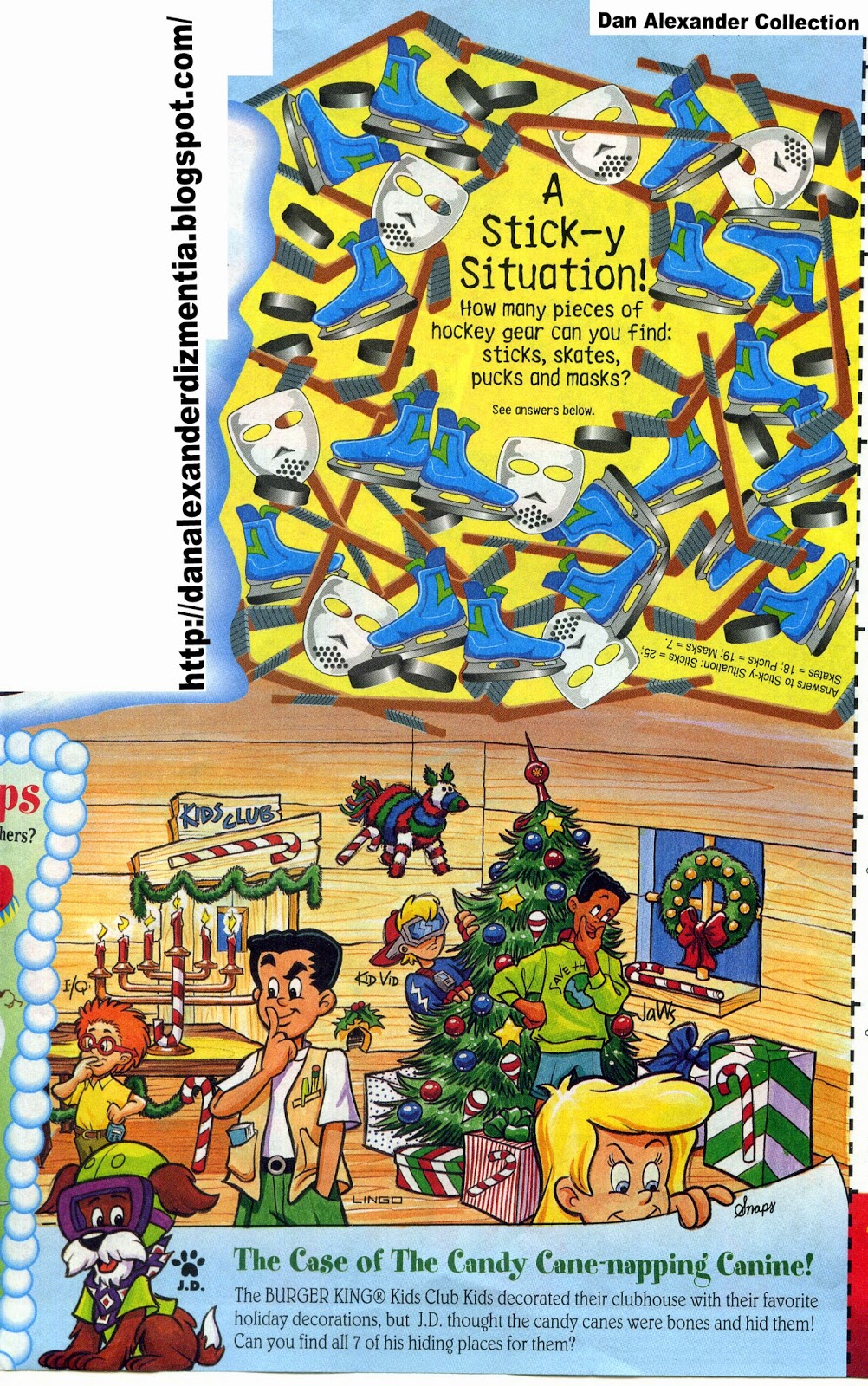 Because Toy Story was such a different type of movie, there was uncertainty of how well it would be received.  At the time, Disney was trying to diversify their animated offerings.  That's why there was Tim Burton's The Nightmare Before Christmas (1993), A Goofy Movie (1995) and James and the Giant Peach (1996).

Kid Vid and his friends were the mascots for the Burger King Kids Club for many years. 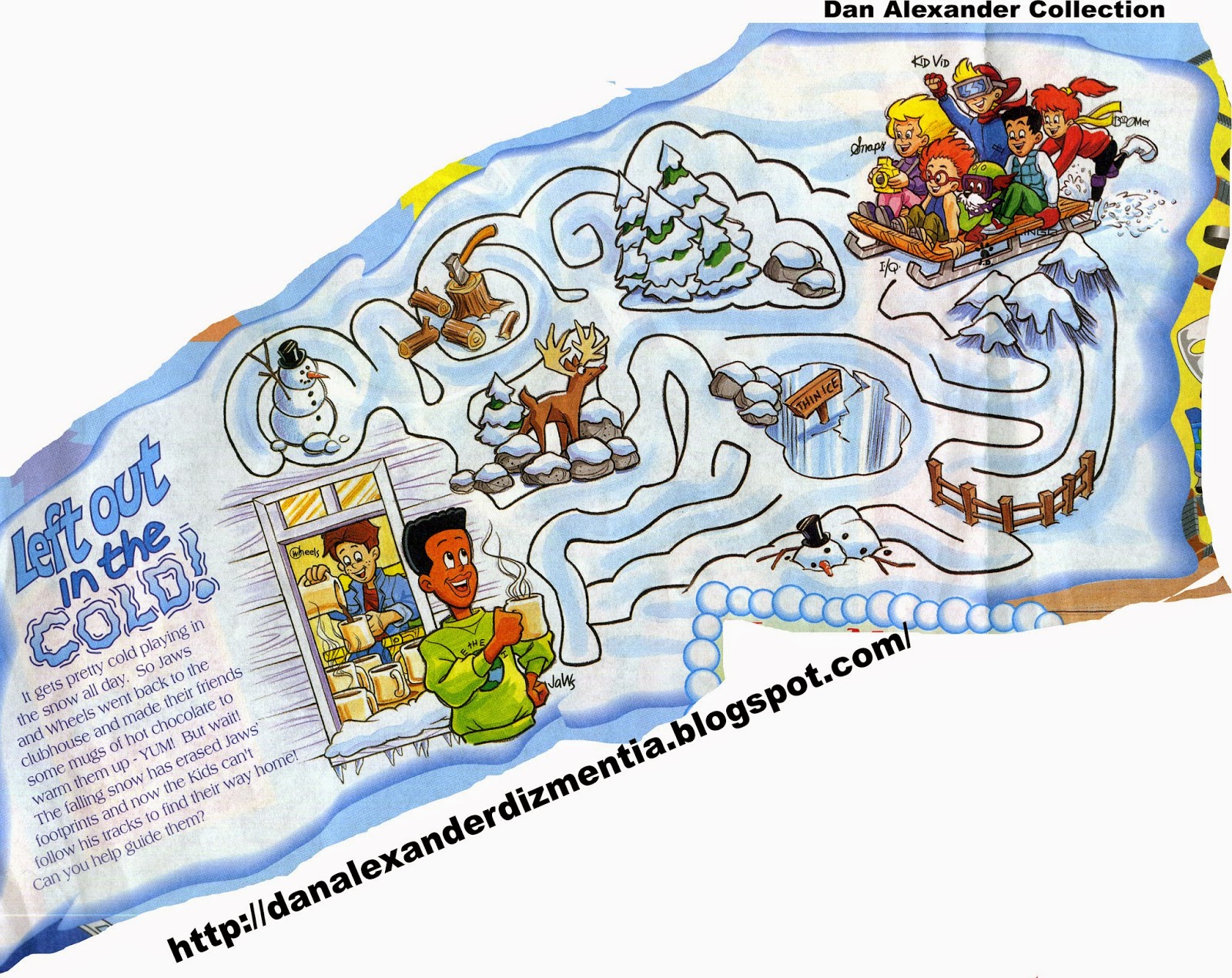 Burger King discontinued Kid Vid and his pals years ago.  They should not feel too bad, because I haven't seen Grimace and the other classic McDonaldland characters at a McDonald's in years. 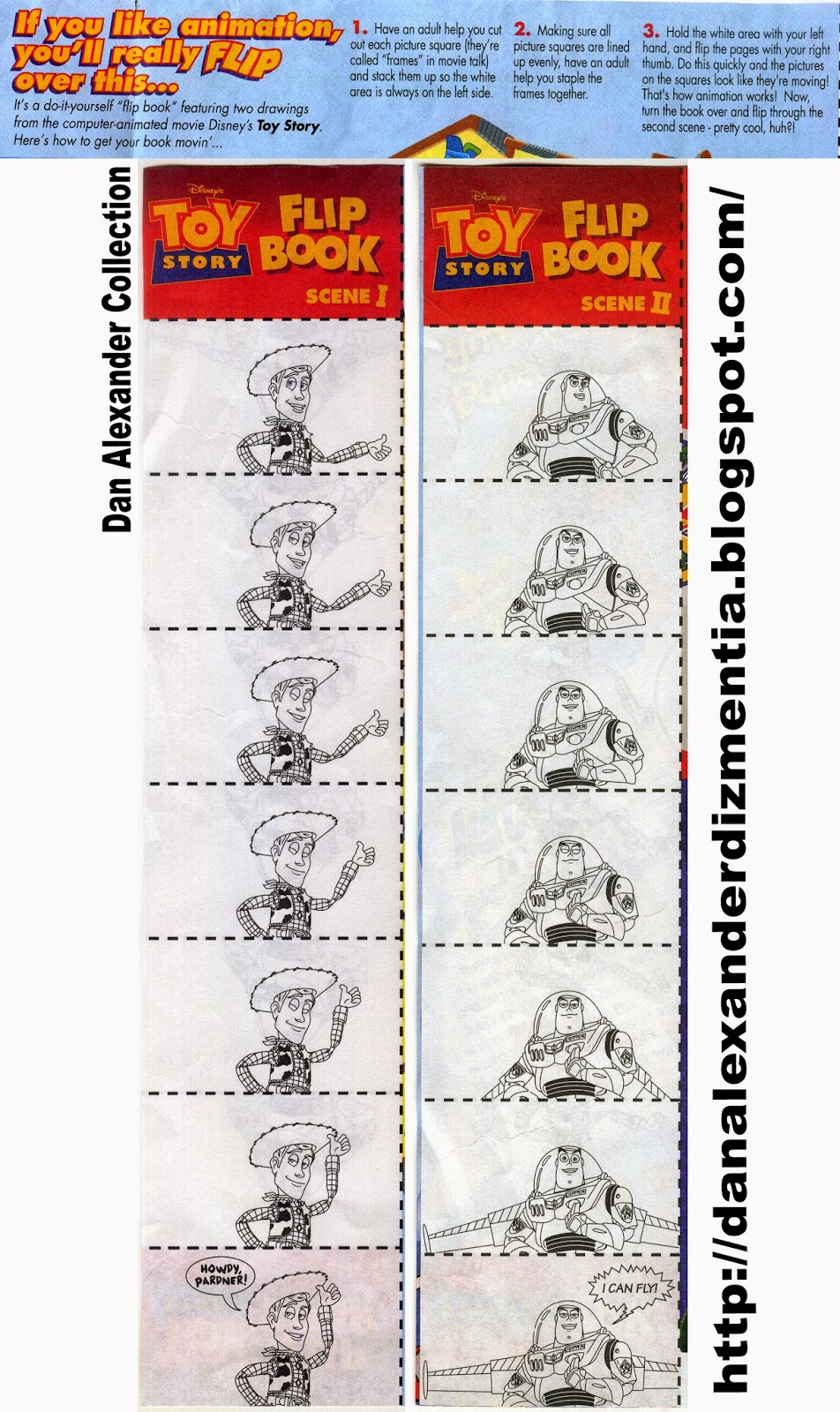 In the United States, Burger King had another set of Toy Story Kids Club Meal toys in October of 1996 to promote the home video release of the film.  When Disney's stateside partnership with Burger King ended in 1996, the Toy Story characters found a home at McDonald's.  In 1999, McDonald's promoted Toy Story 2 with a set of 20 different toys.  By the time Toy Story 3 debuted in 2010, marketing decisions had changed, and there weren't any fast food promotional toys for the film.

For more fun, check out Disney's The Hunchback of Notre Dame At Burger King And McDonald's.
Posted by Dan Alexander at 8:53 PM 6 comments:

Tigger And Pooh And Buzz And Woody, Too: A Stuffed Toy Story 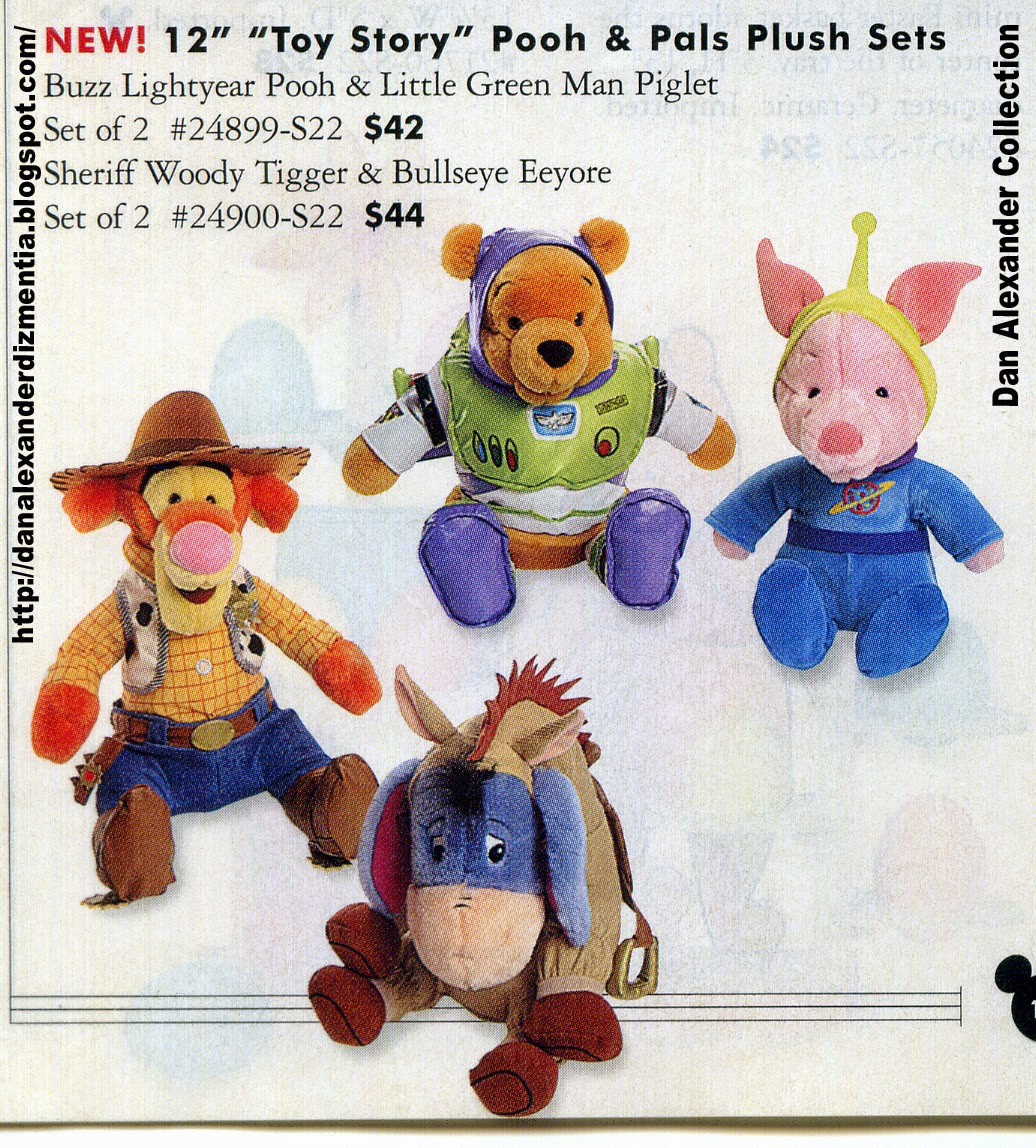 Did you ever wonder what happened to Pooh and Tigger when Christopher Robin was sent away to Boarding School?  Well, wonder no more!  This Toy Story and Winnie the Pooh mash-up could be found years ago in the Disney Catalog and at The Disney Store.

Pooh is cast well as Buzz Lightyear ("Am I reallly that fat?").  He is joined by Tigger (Woody), Piglet (Little Green Man) and Eeyore (Bullseye).

It would have been funny to see Kanga as Jessie, thought it probably would have been difficult for her to squeeze into a pair of pants.  Kanga could have had Roo (dressed as Stinky Pete) in her pouch.

Re-imagined versions of Winnie the Pooh characters are nothing new.  In 2001, a new puppet series called The Book of Pooh debuted on The Disney Channel.  This show featured an older version of Christopher Robin. 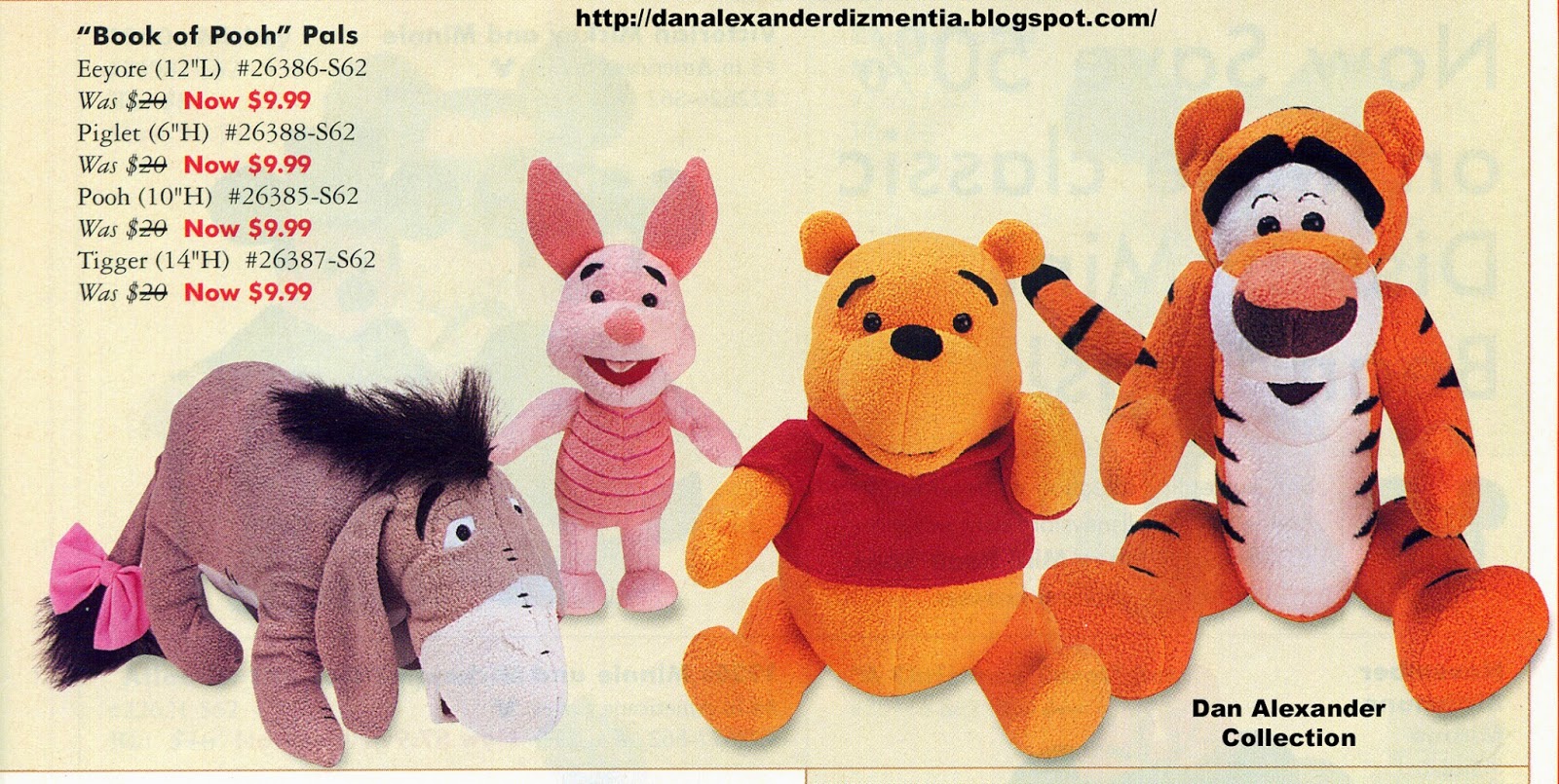 The new look for the cast of the 100 Acre Wood for The Book of Pooh was created by Chris Renaud, who directed the 2010 film Despicable Me.

I bet someday we will see a live action Winnie the Pooh movie with computer animated plush toy characters (like Ted).  It could be an epic, multiple movie franchise like Lord of the Rings.  Just think: Daniel Radcliffe IS Christopher Robin!
Posted by Dan Alexander at 10:01 PM No comments: