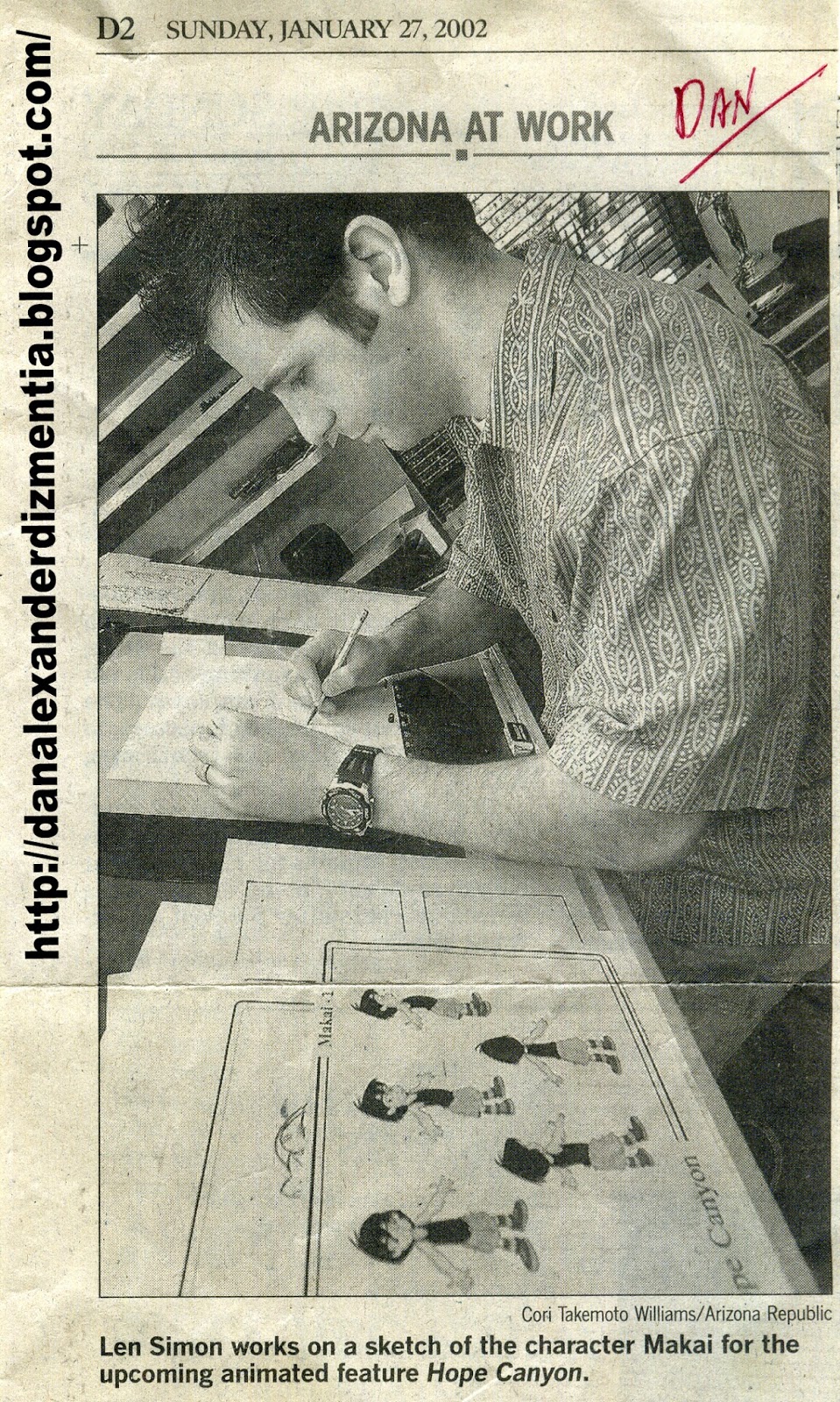 Not all animated movies have a happy ending.  Arizona animators could tell you that.

My grandparents live in Phoenix, Arizona.  Over the years, they have sent me numerous newspaper clippings, especially about animation.  I was well-informed about the opening of Fox Animation Studios in Phoenix, and the production of Anastasia (1997) and Titan A.E. (2000).  And of course, they let me know when the studio closed down.

In 2002, they sent me an article about (former Fox) animator Len Simon's Fat Cat Animation Studios in Phoenix, Arizona.  Fat Cat did contract work for DreamWorks, but their first big project was supposed to be Hope Canyon.  We get a glimpse of the main character, Makai, and we learn the movie involves poachers. 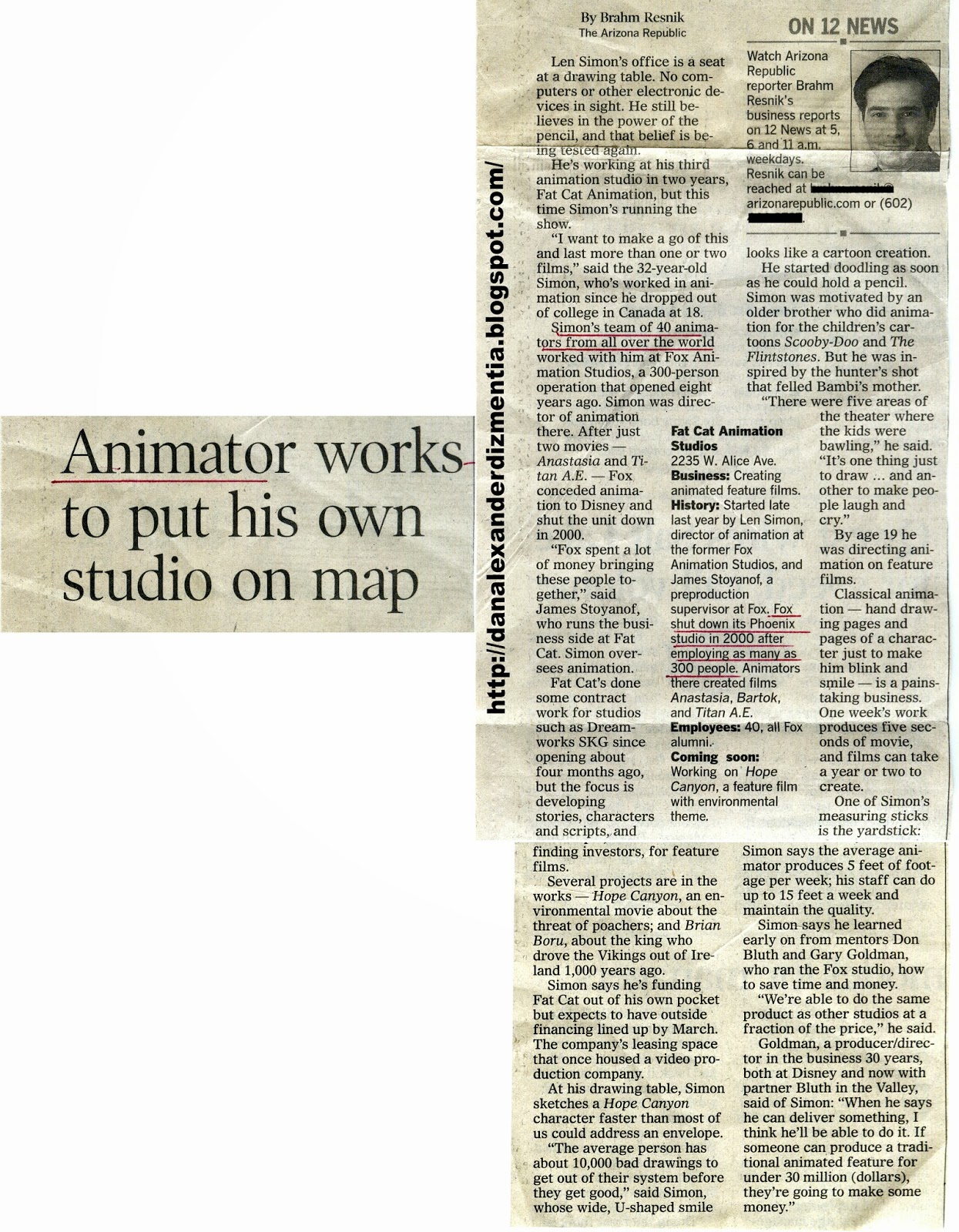 Arizona has some amazing wildlife, which is well-suited for animation.  You may have heard of the Road Runner and Wile E. Coyote.  They're just the tip of the iceberg.  I can't believe there's not a famous cartoon horned toad. 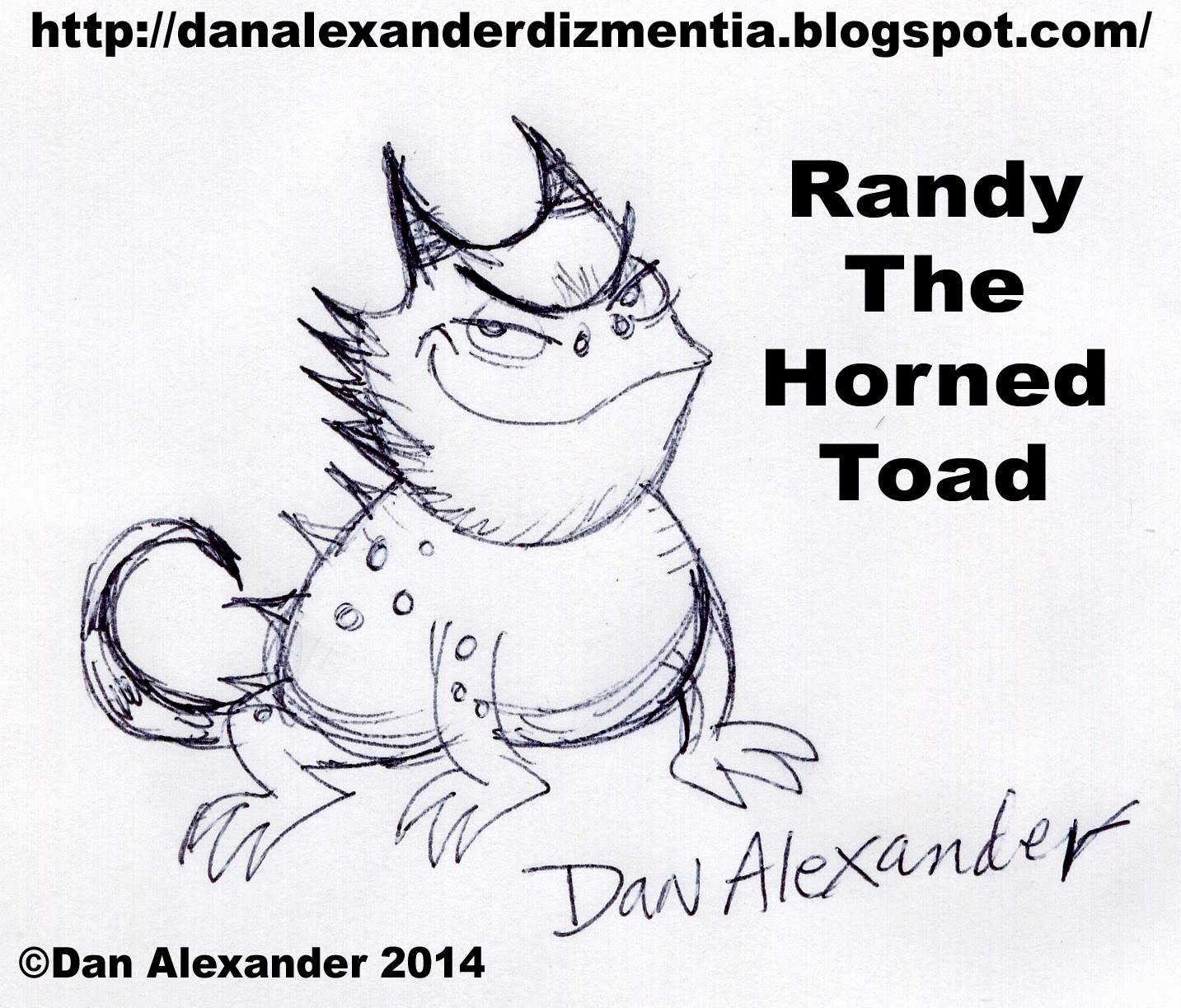 Randy the Horned Toad will star in his own animated series on Spike TV.

Ok, back to Hope Canyon.

Doing some research, I discovered the plans for Hope Canyon were much more ambitious than I thought.  Curiously, the article my grandparents sent fails to mention that a Hope Canyon "theme park" was in the works for Arizona.

Check out this archived article (that I found today online) from the Phoenix Business Journal:

A Phoenix animation company is hoping its newest feature film, "Hope Canyon," will spawn a wildlife preservation park in the Valley that could mean a cultural and economic boost for Arizona.
Hope Canyon Wildlife Preserve, Aquarium and Aquatic Park could provide a new animal sanctuary while spotlighting endangered species and their habitats, say its creators, if all goes according to plan.
The project is tied in to the upcoming animated film franchise, "Hope Canyon," a movie produced by Fat Cat Animation of Phoenix. The film tells the story of a Native American boy and a rancher's daughter who inherit an animal preserve, and their struggle against "evil black-market dealers in endangered wildlife," according to general partner Erik Stoops.
Project founders include Stoops, a Phoenix zoologist and author who specializes in endangered animals, mainly reptiles; Bill Watts, president of Winward Design in San Diego, who served as a primary architect for Orlando, Fla.-based Sea World parks across the nation; and Martin Reker, an English professor at Glendale Community College.
"We're contracted with Len Simon (head) of Fat Cat, and we want to create a franchise similar to the `Land Before Time' franchise," Stoops said. He formed the nonprofit Hope Canyon Preservation Foundation to advance animal conservation.
The $45 million theme park will offer features from dolphins to kayaking to a giant film theater, and is slated to open in 2004 after the release date of the film, Stoops said.
Specifically, the ambitious plans call for several sites: A kayaking and waterslide area; 3,000-gallon enclosed lagoon with sting rays and sharks that spectators can walk through; a 20,000-gallon dolphin bay; a 300,000-gallon aquatic life park, and a main lobby with traditional salt water and fresh water species, Stoops said.
Statuettes of extinct animals will define the entrance's walkway, and the park also will offer a sanctuary exhibit with reptiles, birds and small mammals, along with a penguin "encounter," where people can interact with the creatures behind glass.
Plans for the park also include a giant theater for the animated films, an area for retail shops and restaurants, as well as an "ocean petting zoo," or swim reef, he said.
As for scary snakes, the project will include a serpentarium for exotic venomous snakes and a working venom lab.
Project partners also hope the park will serve as a viable field research center, with the support of the science research community.
Animation characters from the Hope Canyon film, such as "Dink the Skink," a real-life, illegally poached reptile saved by the Arizona Fish and Game Department, will be housed at the preserve.
"The characters in the film will have ecological meaning, so when children say `Dink the Skink,' they'll understand that poaching is wrong," Stoops said.
Other primary characters include "Naya," a white Spirit Bear, which are found in Canadian rain forests; and Ruby, the late elephant from the Phoenix Zoo famous for her painting talents.
"It will put Arizona on the ecological map globally, and we want to raise awareness to help stop poaching worldwide," Stoops said.
At this point, the partners are raising the money to launch the project, an effort expected to fully unroll once the movie has secured a contract for distribution with a major Hollywood studio. Watts said such a contract is in negotiation and close to completion, possibly as soon as this month.
The movie contract is critical to the park's funding, he said. Watts said he could not disclose who the financial backers are because plans are still in the preliminary stages.
"The movie is the biggest trigger; once that happens, we'll go after private funding and we're already working with contacts in Hollywood," Watts said. "In my business, I have a lot of venture capitalist sources globally who want to invest in marine life attractions. They understand the nature of the business."
Watts said feedback has been encouraging.
"We also want to solicit investors from the Phoenix community -- corporate sponsorships are positive opportunities for local businesses, considering the cultural and educational components," he said.
Hope Canyon is seeking a location in either Phoenix or Chandler, and has visited potential sites with representatives from both cities. The integrated park will need about 45 acres of land.
Phoenix economic development officials confirmed that they have been in talks with Hope Canyon founders.
"We think it sounds like a great idea," said Mary Vivion-Withrow, economic development coordinator for the city of Phoenix.
Watts said the entire facility will take about a year to complete.
"It will also give the Valley more job opportunities. The project will require about 300 to 400 employees," he said.
Reker, a third partner, said the project has attracted the backing of several Hollywood stars who have supplied signed endorsement letters.
"People want to protect animals that are endangered," he said.
This project was never constructed, and the Hope Canyon movie was never released in theaters.
In the 1980s, a proposed movie/theme park project called Huck's Landing had a similar fate.  Created by Tom Carter Productions, Huck's Landing was planned to be a water park in Las Vegas and an animated feature.  The project was never built, the film was never made, and the studio did not survive.  An entire chapter of the book Cartoon Confidential by Jim Korkis and John Cawley is devoted to the history of Tom Carter Productions.
Hopefully, someday we'll see more of Len Simon's Hope Canyon and Makai and his animal friends will have the Happy Ending that animated characters typically get. In 1999, Walt Disney World in Florida opened the Kali River Rapids attraction in the Asia section of Disney's Animal Kingdom.  The new addition included the arrival of a new (very creative) dragon mascot for the park.  This Tiger Dragon makes appearances on merchandise, and the Kali River Rapids sign, but unfortunately cannot be found anywhere else.

Kali River Rapids was originally supposed to be called Tiger Rapids Run.  Since there were no actual tigers to see, a name change was in order. 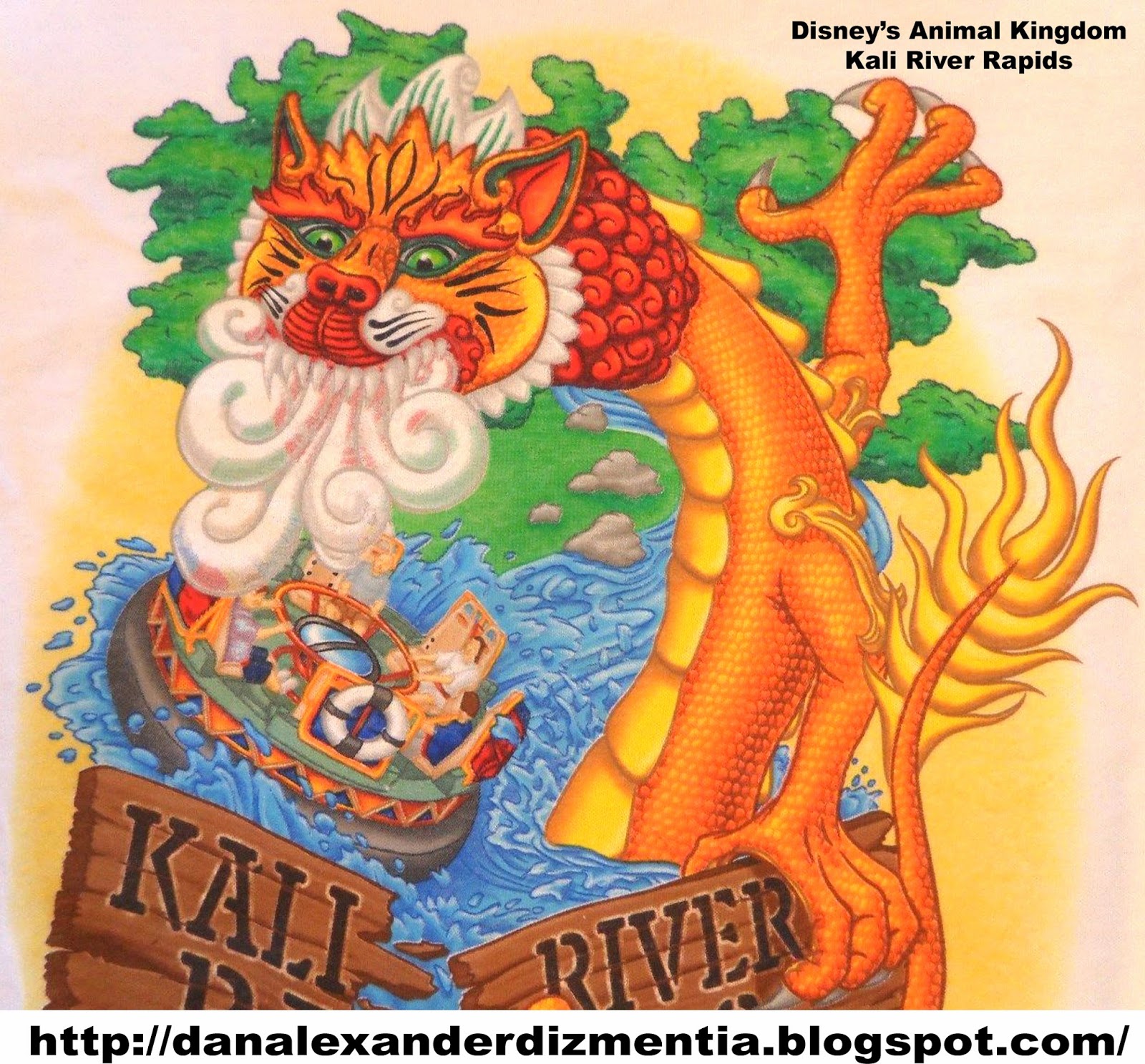 This artwork appeared on early Animal Kingdom merchandise, and strongly suggests a dragon encounter on Kali River Rapids.  That would have been really cool.  Too bad it never happened.

Maybe one day we'll see a fully animated version of this dragon in a re-imagined version of Kali River Rapids.
Posted by Dan Alexander at 9:15 PM No comments: