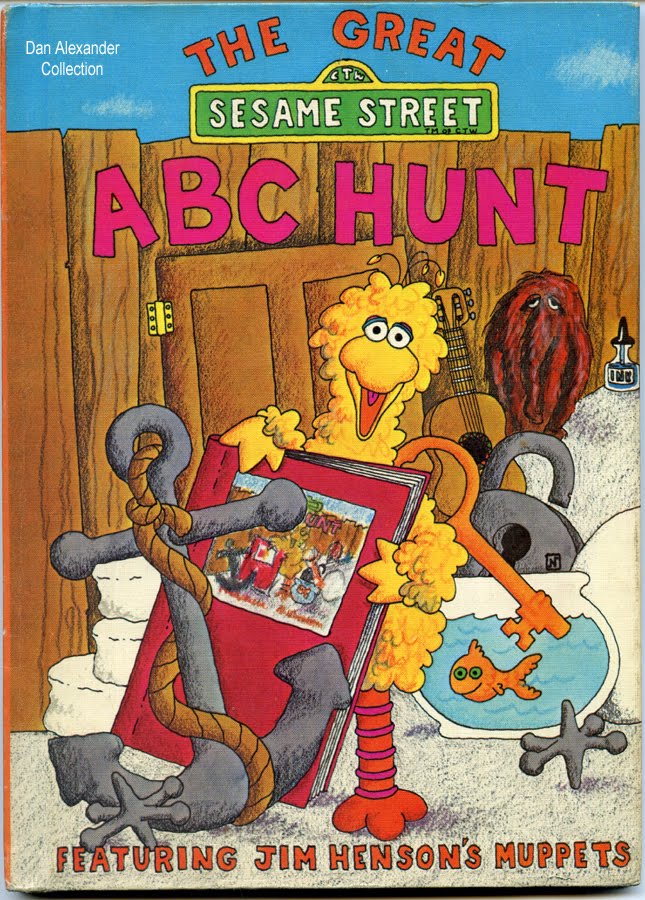 "The Great Sesame Street ABC Hunt" is a fun hardcover book that I've had for as long as I can remember. Maybe that's because the book debuted the year I was born. This book is quite the time capsule. Sesame Street has changed a great deal since its debut in 1969. For starters, Big Bird used to be the show's main character. 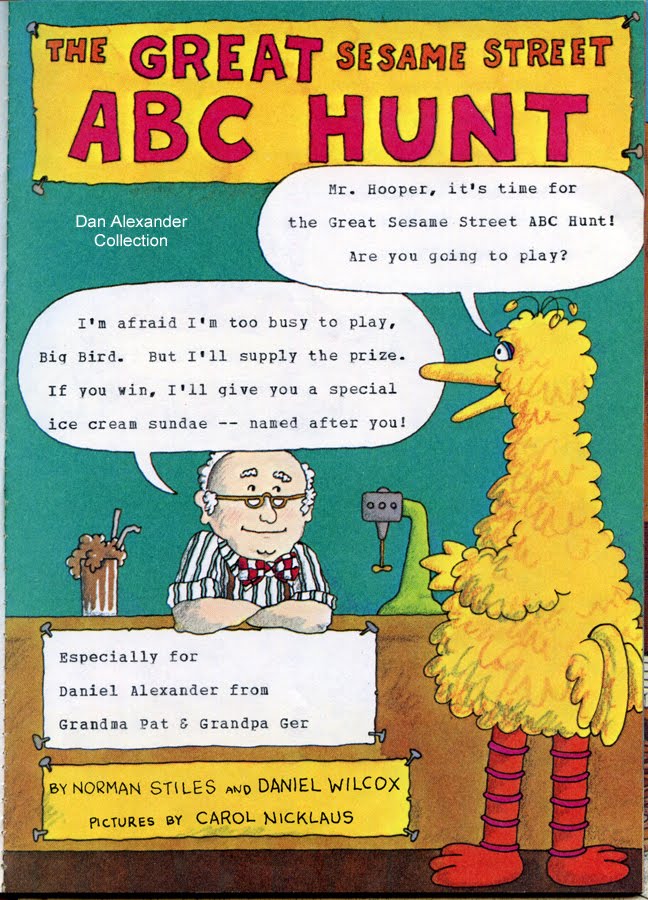 Mr. Hooper's Store was the happening place on Sesame Street. Big Bird frequently mispronounced Mr. Hooper's name. Actor Will Lee (Mr. Hooper) died in 1983. Rather than have the character recast or have him move to Peru, the cast of Sesame Street addressed the death of Mr. Hooper. This is one of the most memorable episodes of the series.

For many years, none of the adults on Sesame Street believed that Big Bird's friend Mr. Snuffleupagus was real. 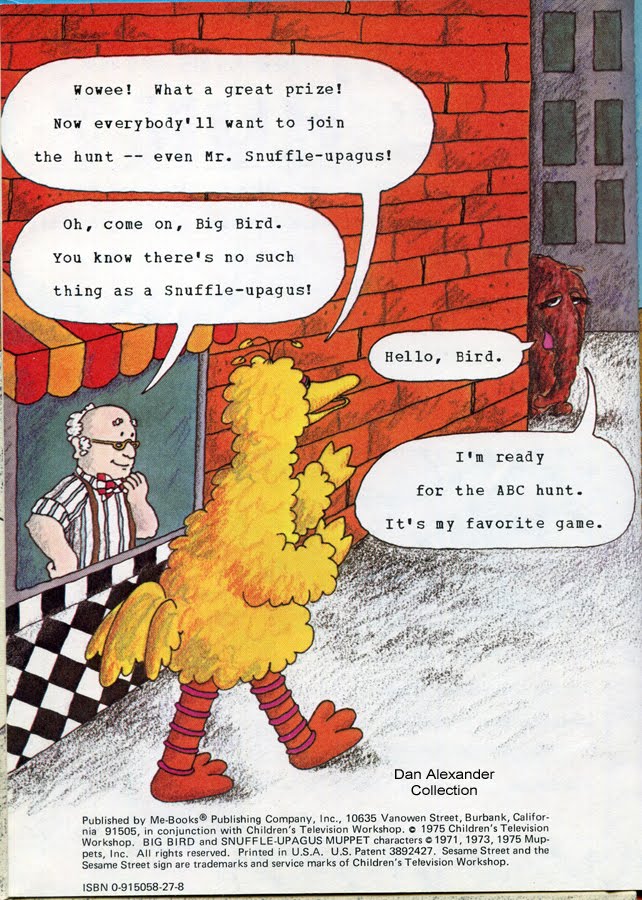 This was addressed in 1985, when the adults finally saw Mr. Snuffleupagus, and apologized to Big Bird.

This book is "A Me Book." This may have been one of the first presents that I ever got. People rarely call me "Daniel." It seems kinda strange to see that over and over again. 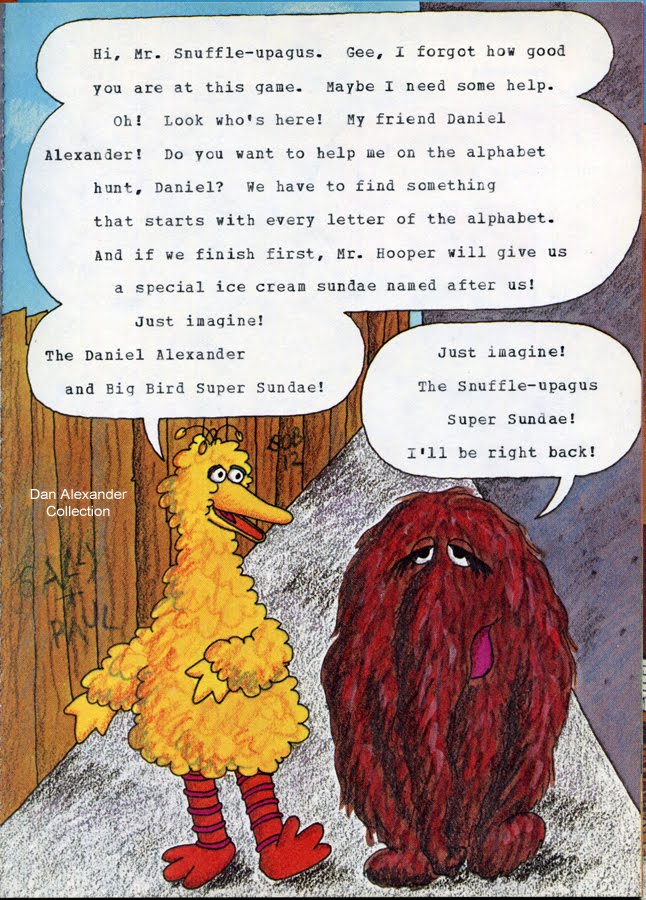 My Grandparents loved getting these personalized books for me. I have a "Fox and the Hound" book and a "Jungle Book" one, too (they are thin, cheaper paperback books). This Sesame Street one is different because it is an actual hardcover book. I had actually forgotten it was "A Me Book" until I opened it up. 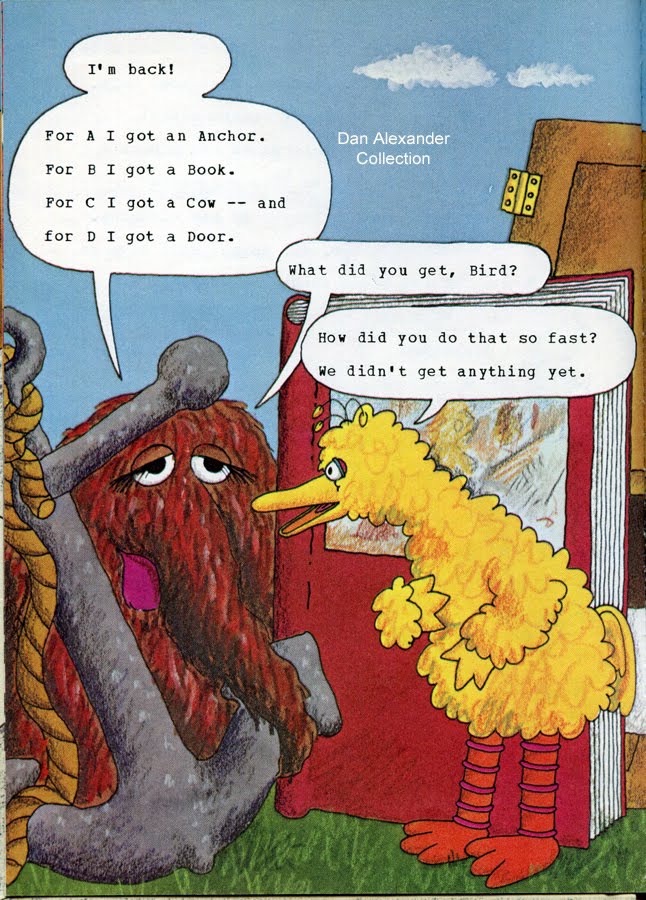 It looks like Snuffy is really good at this ABC Hunt. Big Bird has a secret advantage, though---me!! 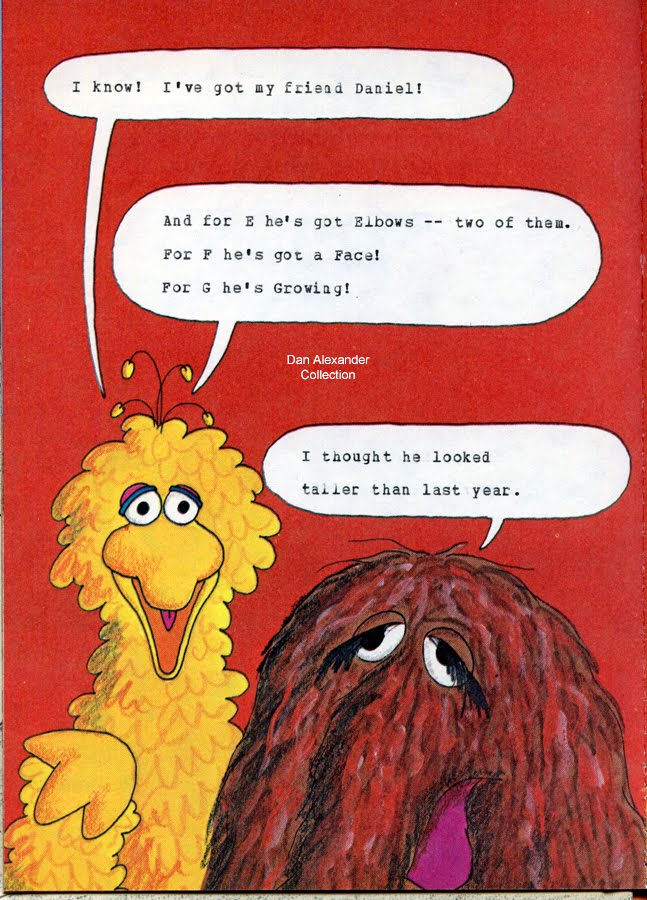 Big Bird spouts off a lot of knowledge about me in this book. He knows my birthday, my address, and the name of our cat. It's pretty cool for a kid to be included in the story! 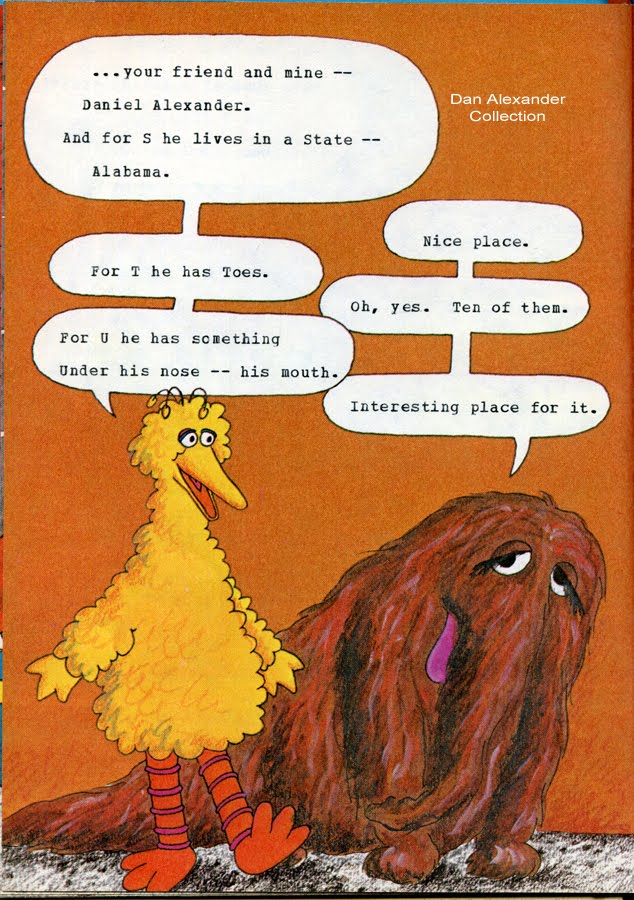 Mr. Snuffleupagus, have you really been to Alabama? Well, maybe with Sesame Street on Ice...

With my help, Big Bird does really well on the ABC Hunt! 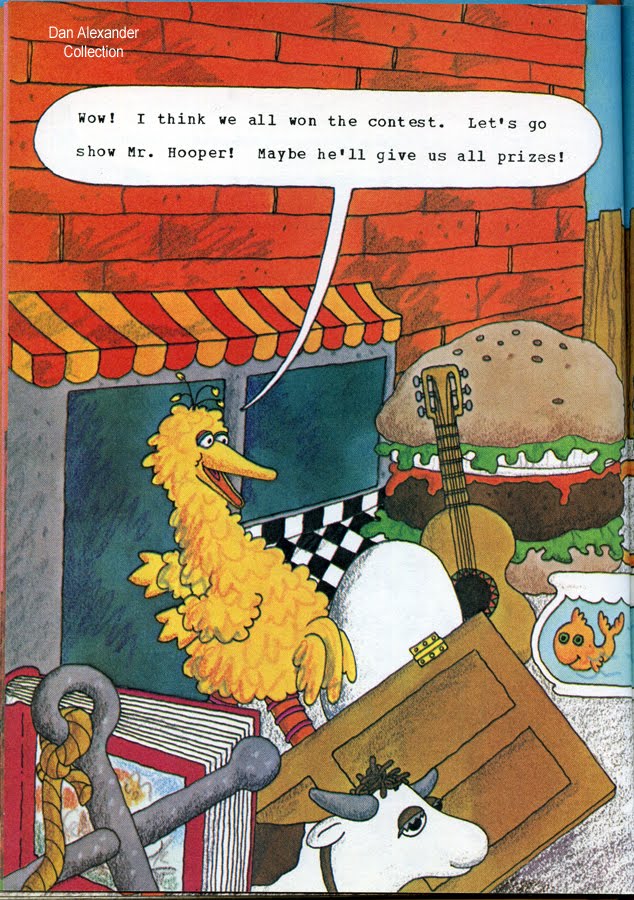 Oh no, Big Bird! Something tells me Mr. Snuffleupagus is about to ditch you. 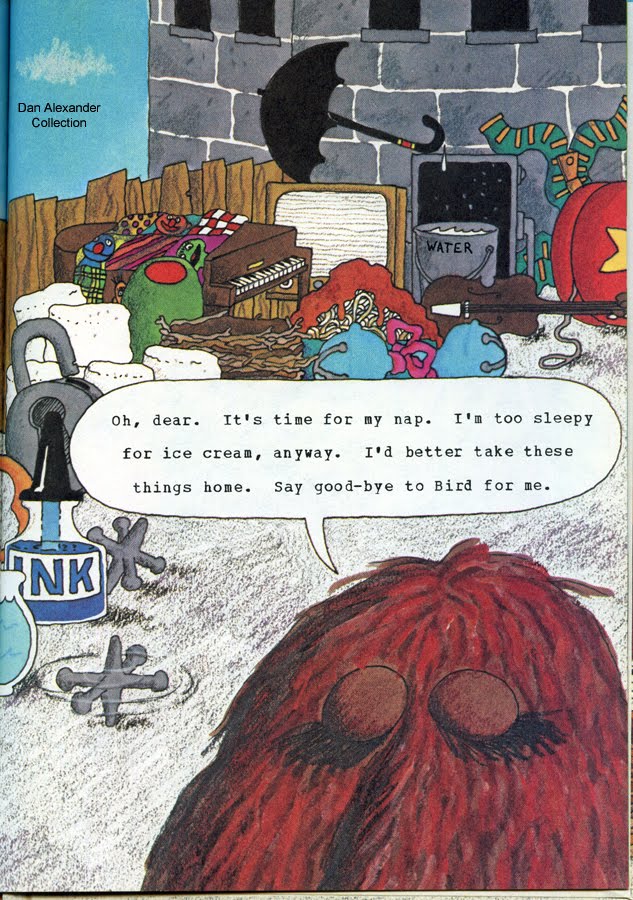 Mr. Hooper is such a nice guy. 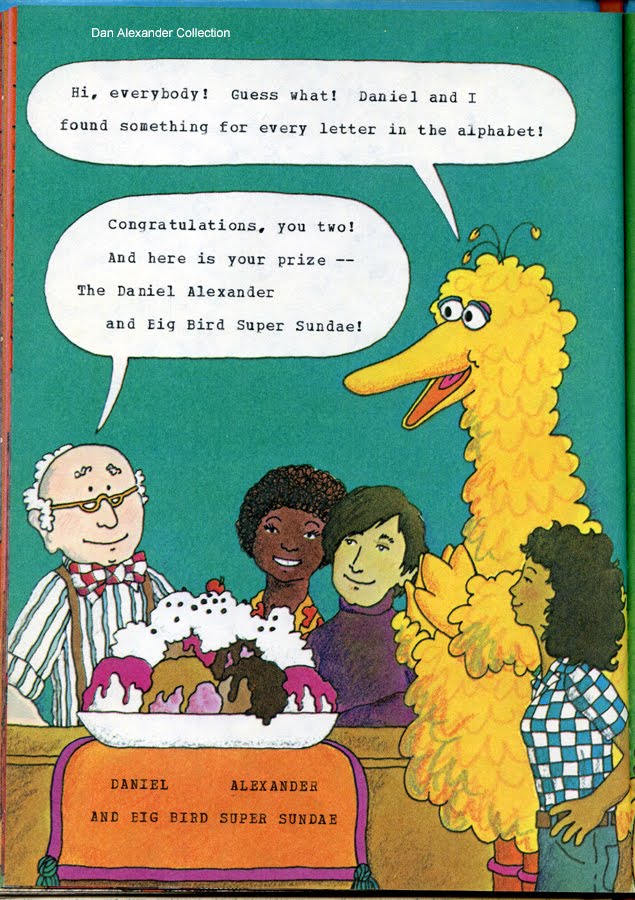 Dig those funky threads the adults are wearing!

As usual, nobody believes Big Bird. 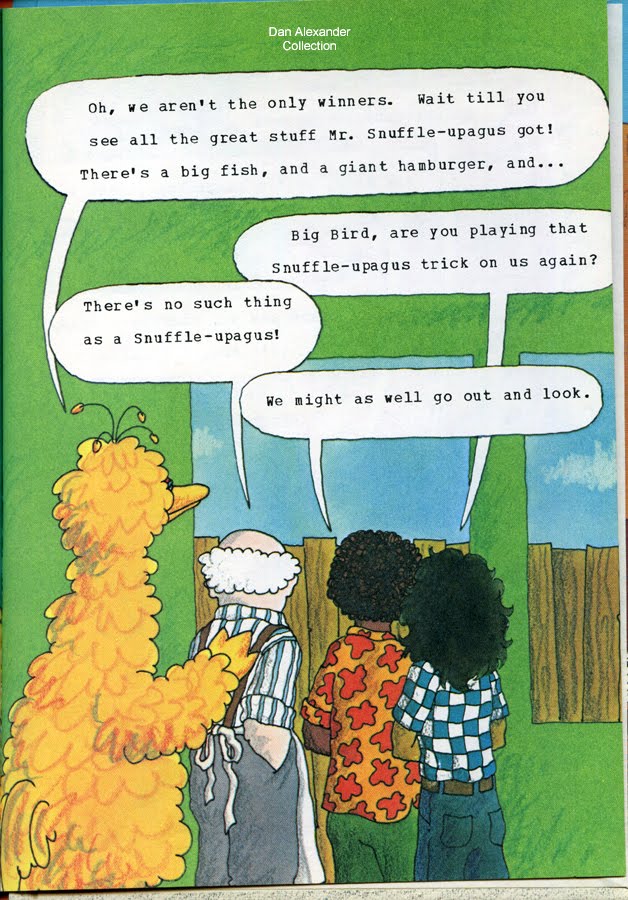 Once again, Snuffy hits the road before the adults can see him. Snuffy is sort of a fair-weather friend. 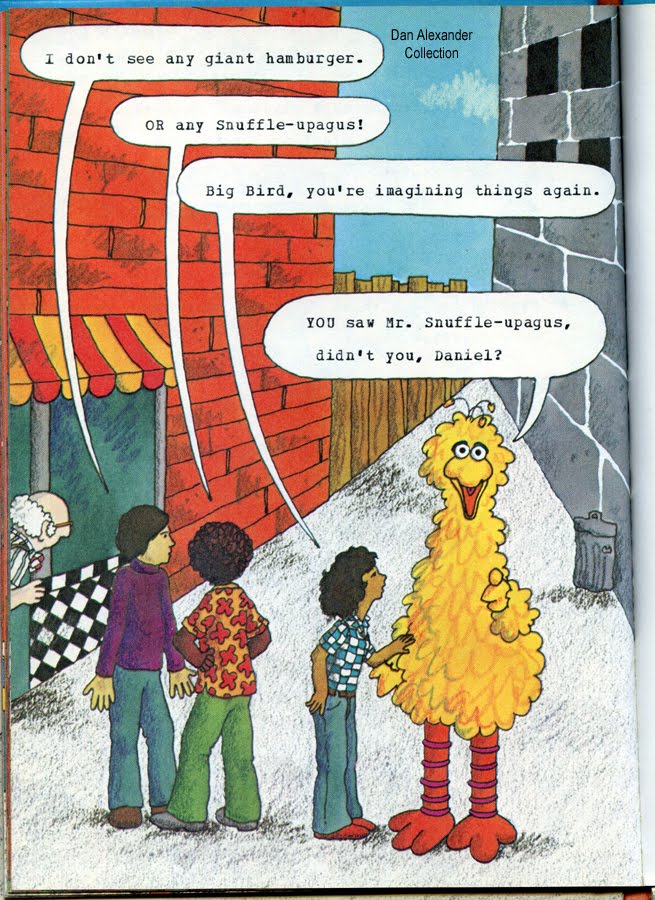 Yes, Big Bird, I did. Sometimes people only see what they want to see. I hope you took something from your trip to old-school Sesame Street. I know I did. It was a place where most people dismissed you or didn't believe you. Your authority figures were right and you were silly and foolish for thinking otherwise or challenging them with something they could not understand or see. It's just like how the real world often operates. But YOU knew they were NOT right about everything, and Mr. Snuffleupagus WAS real!
Posted by Dan Alexander at 4:32 PM