Despicable You: Antonio And The Despicable Me 2 Minion Surprise 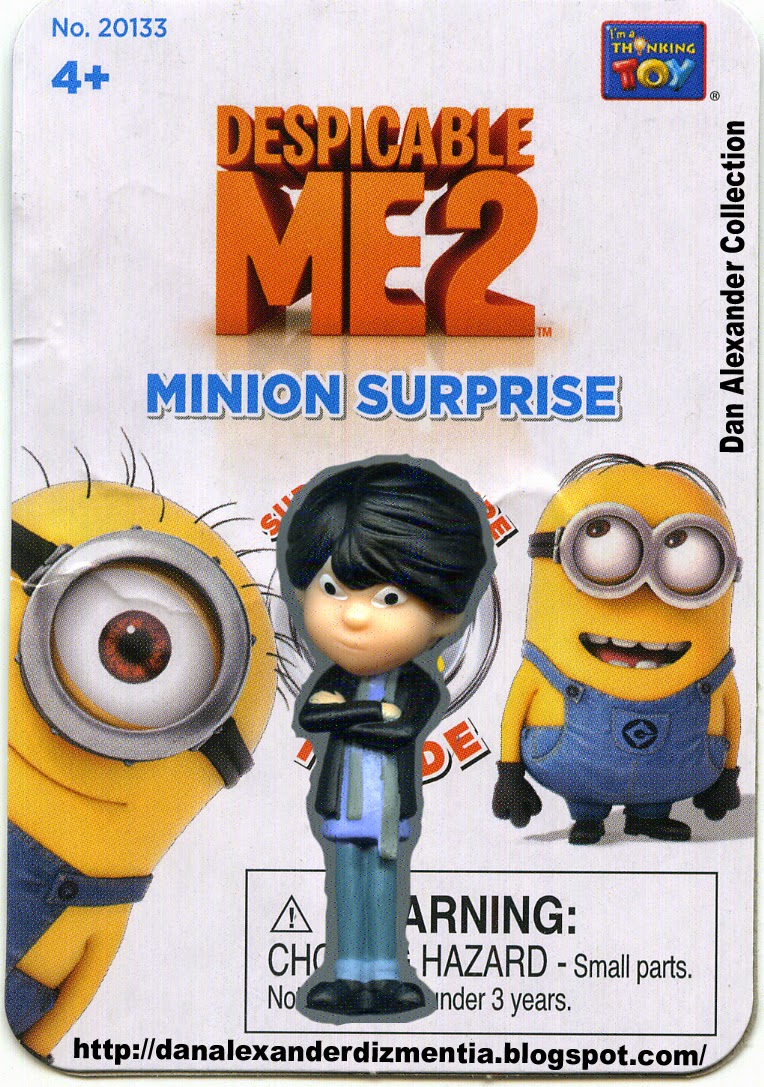 I seek out the rare and unusual.  Despicable Me 2 was a huge hit for Universal in July 2013 (their most profitable film ever).  Merchandise for the movie, especially toys of the Minions, has popped up everywhere.  But what about a secondary character like Antonio Perez, the son of villain Eduardo "El Macho" Perez (voiced by Benjamin Bratt)?  This figurine truly was a "Minion Surprise" for me today, especially since I was not even looking for it.

Having an outlet to write about things like this makes me feel like I'm making something constructive out of a day of setbacks.  Let me explain.

I live in the South.  It is June, and over the past few days, it has become clear that the Air Conditioner in my house (that I just bought in 2008) has a problem.  The problem, according to what the repairman said today, is that I need a brand new Air Conditioning unit (which, in case you wondered, is extremely expensive).  So that is a purchase I look forward to making.

As the repairman was getting ready to leave my house, I explained to him that my next task was to go get a new battery for my car.  Yesterday, I had problems starting my car.  Friends suggested that it was probably my battery.  The car seemed to eventually start, so could this really be the problem?

The Air Conditioner repairman suggested I go to Walmart to get a new battery.  Fingers crossed, I put the key in the ignition.  The car started, eventually.  I found the Auto Repair section at Walmart, which was unattended.  I parked my car.  I found an employee.  They told me to bring my car to one of the maintenance bays.  The car would not start.  At all.  It was finally dead.

At least I was in the right place for that to happen.

The Auto Repair guy told me it would be at least one and a half hours until he could do anything, because they were busy and short-handed.

So I spent hours wandering around Walmart, not wanting to be That Guy that keeps asking "Is my car ready yet?"

By the second hour (I think) I was wandering in one of the Clearance sections and found dozens of silver foil "blind bag" packages of Despicable Me 2 Minion Surprise figures.  They are small, and only $2.88 each, and included characters that I had not seen merchandise for, including Antonio and Eduardo.  I had just spent over $100 on an Air Conditioner that needs to be replaced and was about to spend over $100 for a new car battery.  So I decided I would not try to get all of these.  In fact, I only bought one. 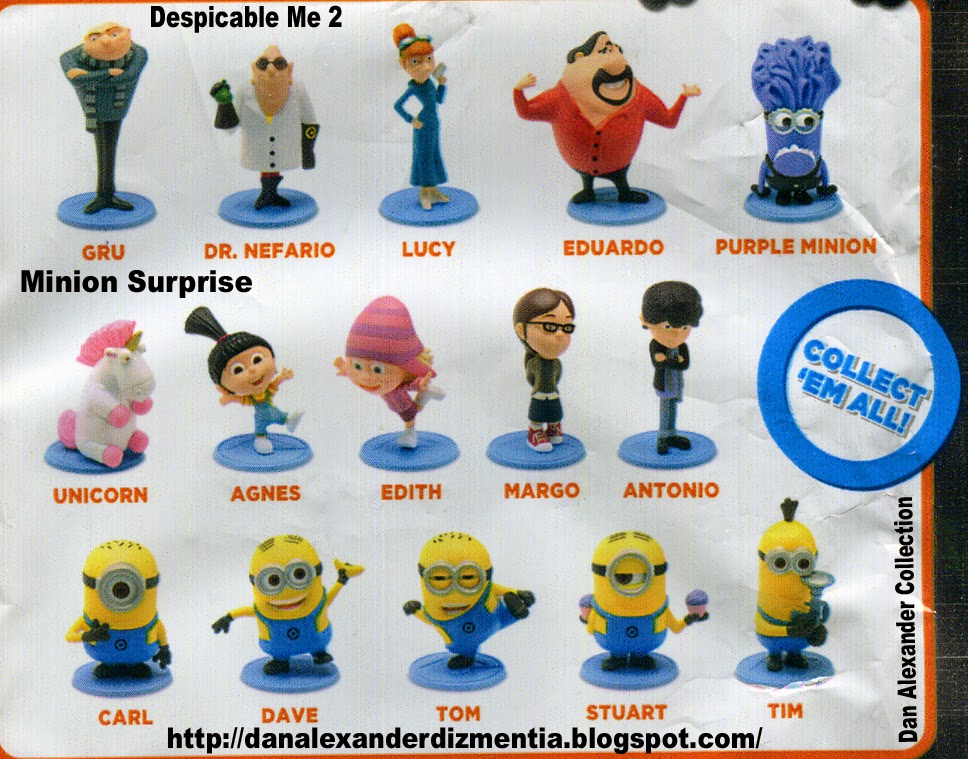 I think I spent a good thirty minutes feeling each foil bag.  The Figures are packaged between a cardboard insert, which makes it difficult to tell what you will get.  I correctly guessed which bag had Antonio.  I could not find Eduardo (I bet he was there---at the time, I did not understand that they were packed between two pieces of cardboard).  I know I found Agnes, Gru, Lucy, Dr. Nefario, Unicorn and Margo.  There were lots of Minions, but I could not tell which ones.

I think today was Screaming Baby Day at Walmart.  The Minion Surprise was fun and much-needed.  I admit that I want to go back to get more of these figures, even though I really should not.

The most unusual thing I found in the Clearance Section at Walmart today was Spider-Man Fighter Pods figurines of the (retired) Marvel comic book Spider-Man spoof pig character Spider-Ham (Peter Porker).  That was actually shocking to see.  I would have bought it, but you had to get a whole set of characters and it was $7.00.  That's not really a lot to spend, unless you just bought a new car battery and what turned out to be a pointless maintenance session on a useless Air Conditioner.

The Return of Paddington Bear 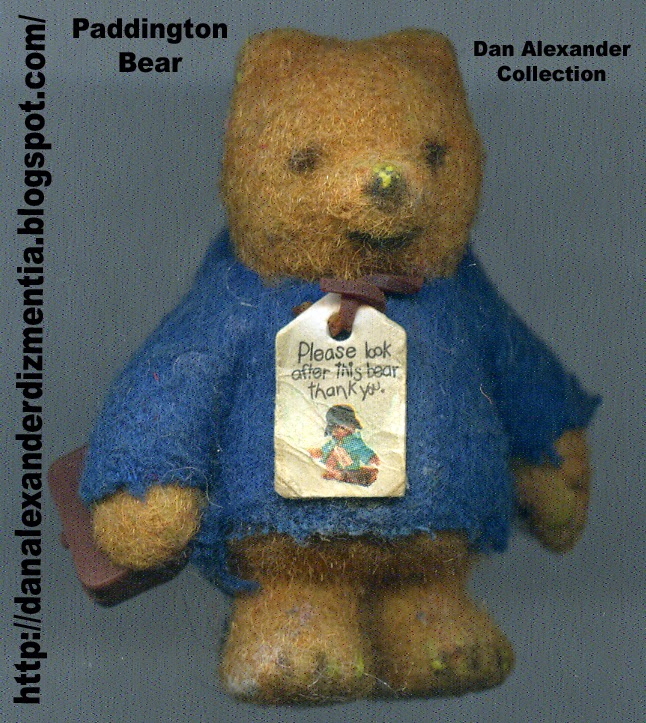 Paddington Bear, created by Michael Bond, first appeared in 1958.  I became aware of the character from watching the 1975 stop motion/hand drawn animated BBC Paddington series that ran on American Television stations like PBS.  I liked Paddington enough to ask my parents for this small figurine of the marmalade-loving bear from Peru (he is missing his trademark hat).

Many kids in the United States learn quite a bit about England from watching imported programs like Paddington.  I personally enjoy speaking with an English accent on the telephone sometimes.  I call myself "Nigel."

Paddington is eager to return to the spotlight, and one wonders if he's been getting career advice from Miley Cyrus.  Trailers for the 2014 live action/computer animated Paddington movie show the beloved bear (who was originally going to be voiced by Colin Firth) tasting his own ear wax and sticking his face in a toilet.  It's kind of shocking, but I guess it is true to some British comedy.  The new Paddington, which features Downtown Abbey star Hugh Bonneville as Mr. Brown, has inspired the "Creepy Paddington" sensation on the Internet, inserting the semi-realistic movie version of the bear into horror film situations.

Meanwhile, Winnie the Pooh is watching and thinking about his next career move.  Hopefully not a live action movie called Pooh Hits the Fan.

Posted by Dan Alexander at 8:37 PM No comments: