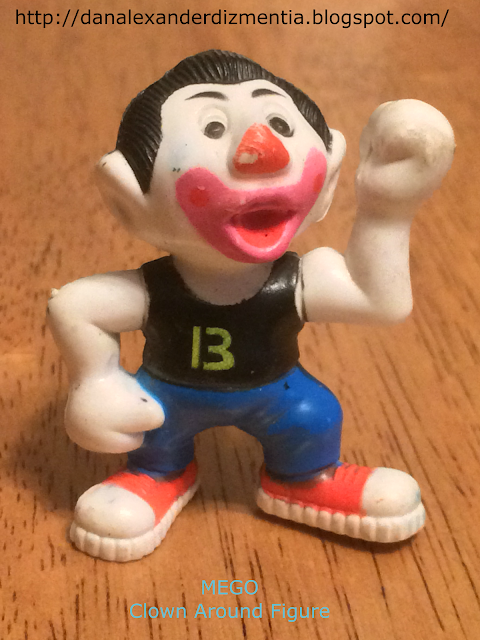 In 1981, the Smurfs were getting to be a big deal, and so was a musical TV show called Sha Na Na.  The big star of the Sha Na Na show was a greaser named "Bowzer" (performer Jon Bauman).  The Mego toy company decided to parody Bowzer and other (then) current pop culture figures and activities in a line of collectible Smurfy-type PVC figures called "Clown Around".  This clown character is indeed named "Bowser" (the character on the Sha Na Na show has been spelled both ways).

Outside of the United States, the characters were known as "Flippo Trippo" Clowns in some countries.

Clown Around figures were available in a number of stores.  I usually saw them at a place called Service Merchandise (near the registers).  I only ever saw a small assortment of the clowns, never the entire series. 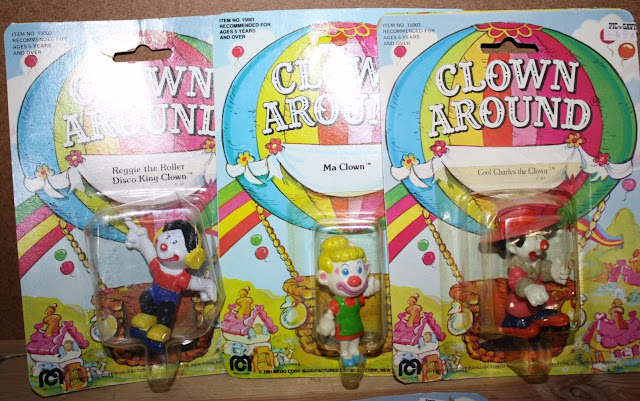 The characters were frequently packaged incorrectly.  It was not uncommon to see a clown with the wrong name.  But you wouldn't really know it was wrong, because these were not known characters.

The back of the Clown Around package lists all the figures available.  Note that Bowser is not on this list, which was confusing to me.  Bowser was part of a a new wave of characters released later. 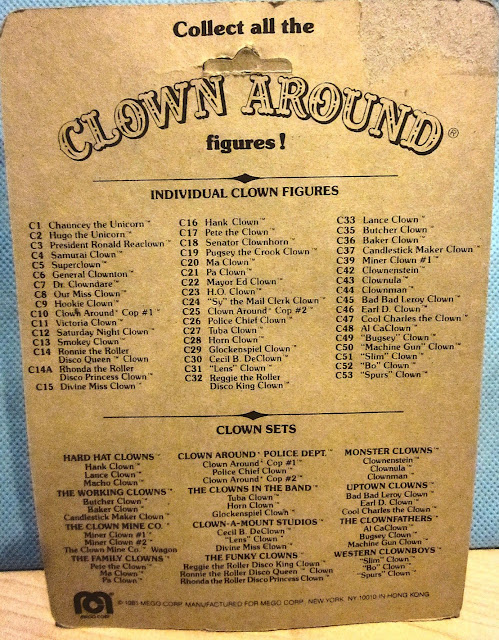 Yes, there was a President Ronald Reaclown for sale.

From Left to Right, here's Pete the Clown, Pa Clown and Hookie. 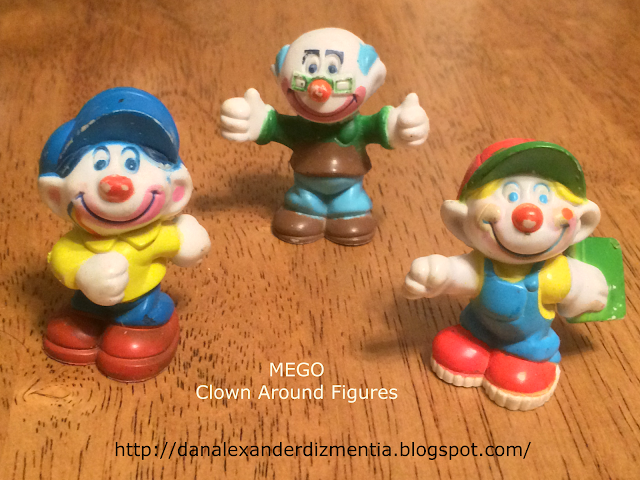 Pugsey the Crook Clown is just a repainted version of Pete. 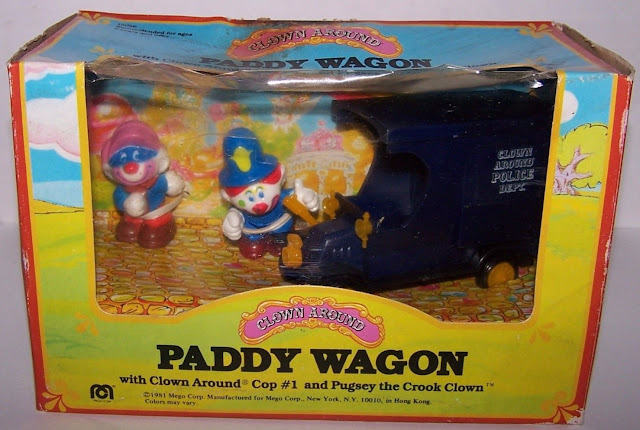 The Paddy Wagon set was sold at Kay-Bee Toy Stores for years (I'm assuming it was actually a handful of sets that remained unsold for years). 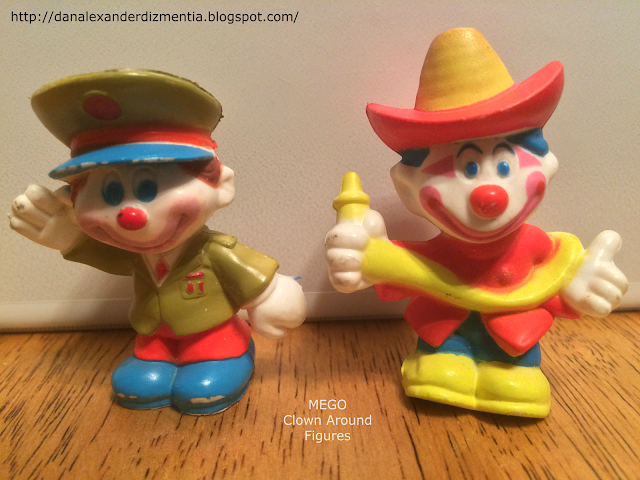 Smokey reminds me of a clown from Dumbo. 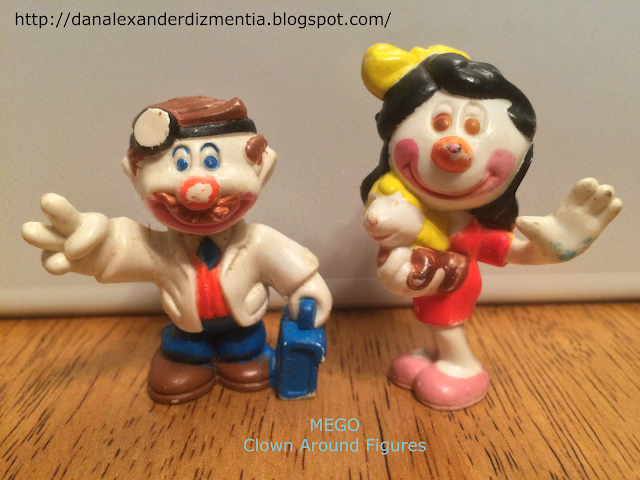 Victoria Clown has her own dog.  That is two figures for the price of one!

Al CaClown is bad, but in a good way. 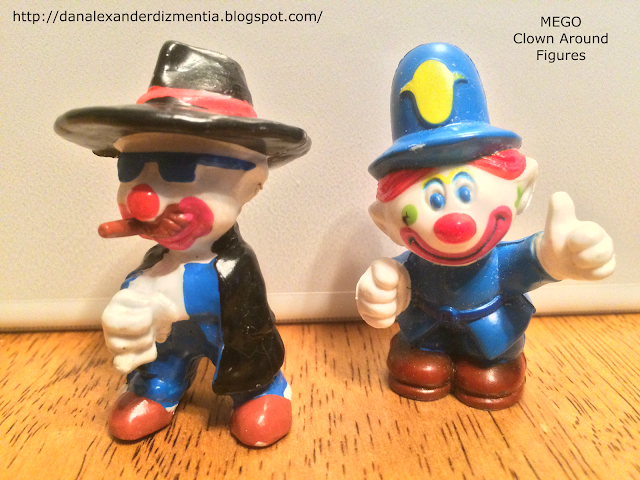 There's Clown Around Cop #1!  Clever name.  I never knew if this cop was supposed to be male or female.

The big Unicorn on the left is Chauncey.  He was a very easy figure to find in stores. 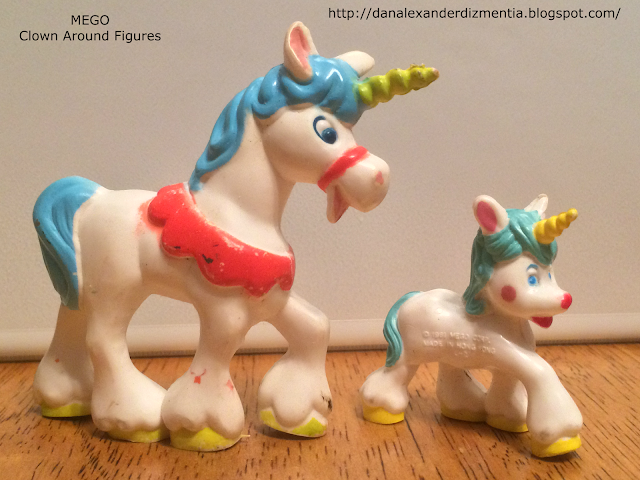 The small Unicorn on the right is Hugo.  Hugo was rare!  I ended up finding Hugo in a toy store in 1991---the store had all sorts of old toys, including a bunch of Clown Around figures I had never seen before.

I was scared of clowns as a kid, but I liked these.
Posted by Dan Alexander at 7:08 PM 2 comments: