The New Mickey Mouse Club, Teen Angel And The Party 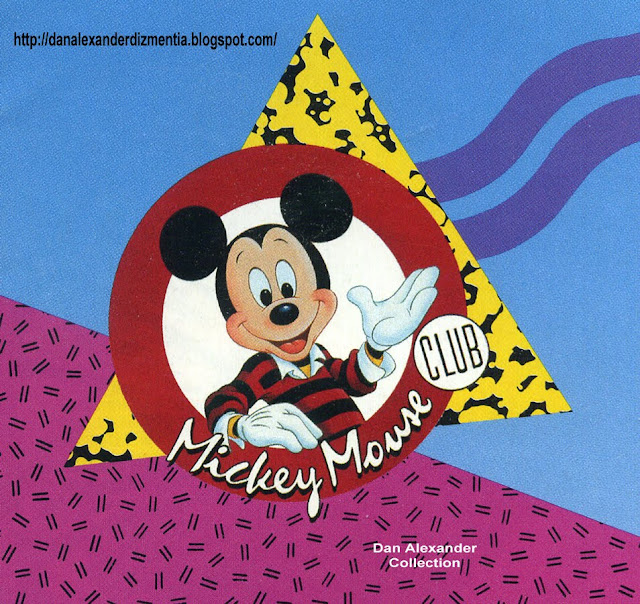 In 1989, The Disney Channel launched a brand new version of the famous Mickey Mouse Club. Mickey Mouse was really just a mascot for the show. In fact, eventually he was dropped as the show became "MMC" and the Mouse was not even mentioned. The talented, versatile young cast was the main focus.

The new Mouseketeers ditched the ears for cool varsity jackets featuring their names and the new Mickey Mouse Club logo. The show was kind of like Nickelodeon's "You Can't Do That On Television" mixed with "Saturday Night Live." 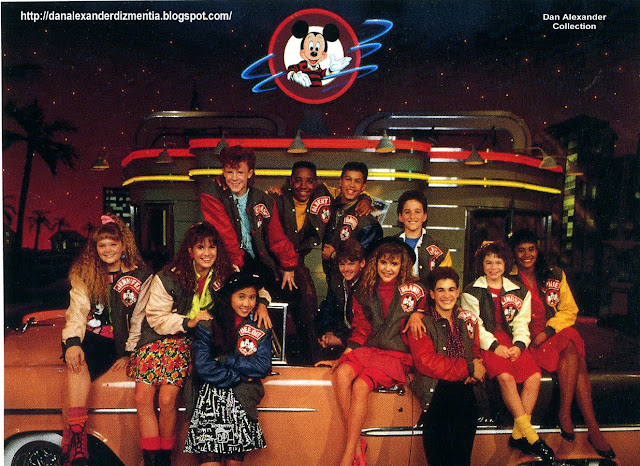 The young performers were joined by their adult co-stars/co-hosts, Fred Newman and Mowava Pryor. 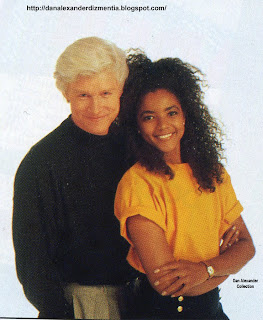 Like the original Mickey Mouse Club, each day's show had a theme. Monday was Music, Tuesday featured Special Guests, Wednesday was Anything Can Happen, Thursday was Party (replacing the original "Circus") and Friday was Talent/Hall of Fame. 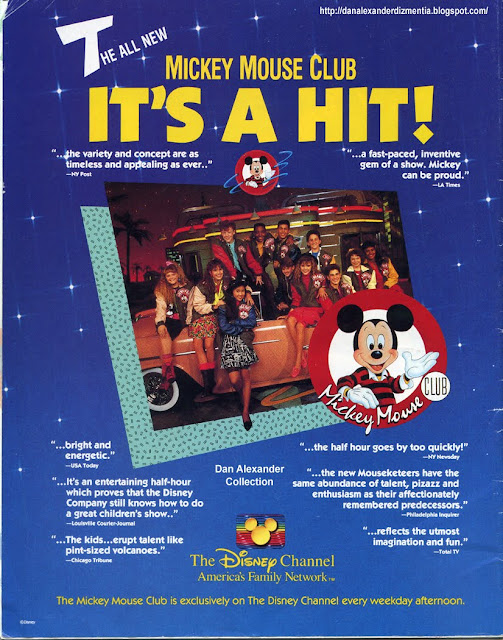 The Mickey Mouse Club was one of the first shows to be filmed at the Disney MGM Studios at Walt Disney World in Florida, which also debuted in 1989.

The Disney MGM Studios was quite different in its earlier days. It was much smaller! And yes, there is a big upside down "Hidden Mickey" here. 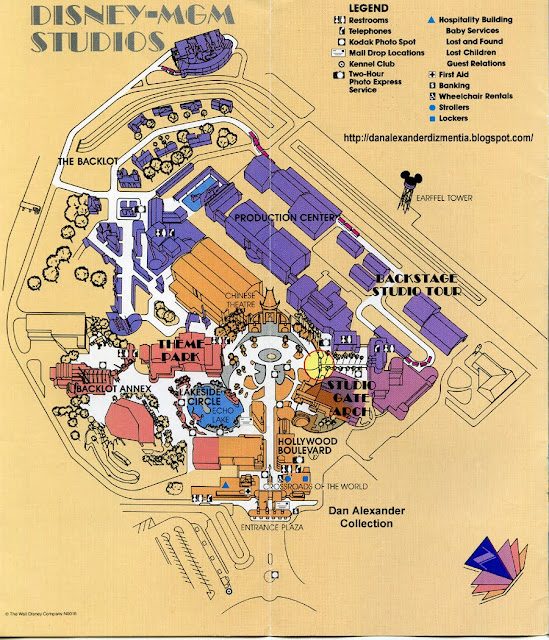 This map of Disney MGM Studios from 1989 shows the very limited roster of attractions at that time. At this point, the Star Wars themed Star Tours ride was still not open. Much of the park was only accessible to guests as part of the Backstage Studio Tour, via a Tram ride and a Walking Tour. 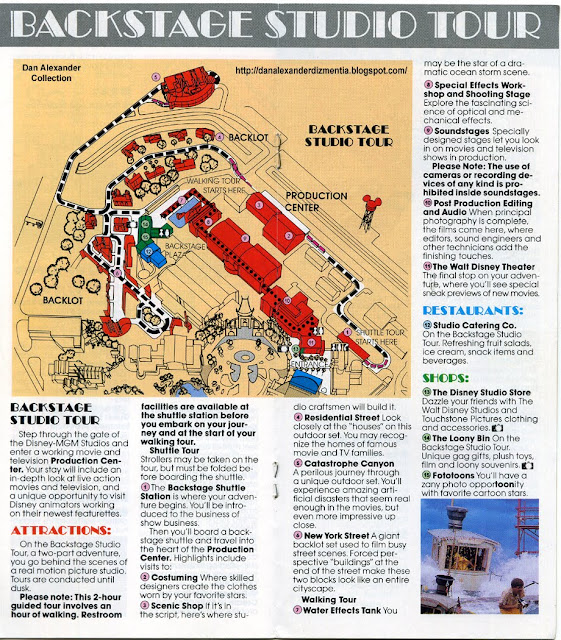 The Walking Tour went through the Soundstages on raised tunnels above the action, so visitors may have seen The Mickey Mouse Club being filmed (from behind soundproof glass)

Eventually, actual television and film production at the Disney MGM Studios ended. A 2009 map of the park, now called "Disney's Hollywood Studios," shows how much the place has changed. 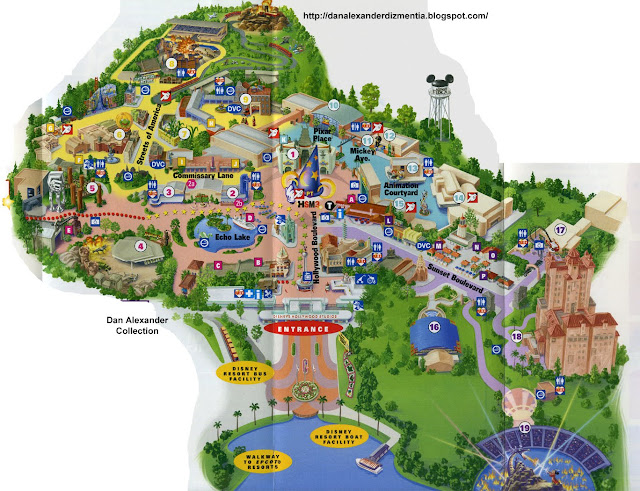 The Production Center area with the Soundstages is now home to Pixar Place, with the Toy Story Midway Mania ride. Star Tours is currently being updated to a new ride experience. The park now also features MuppetVision 3D, the Twilight Zone Tower of Terror, and the Rock 'n' Roller Coaster Starring Aerosmith.

Before kids had the Internet, they could join the Mickey Mouse Club by mail! 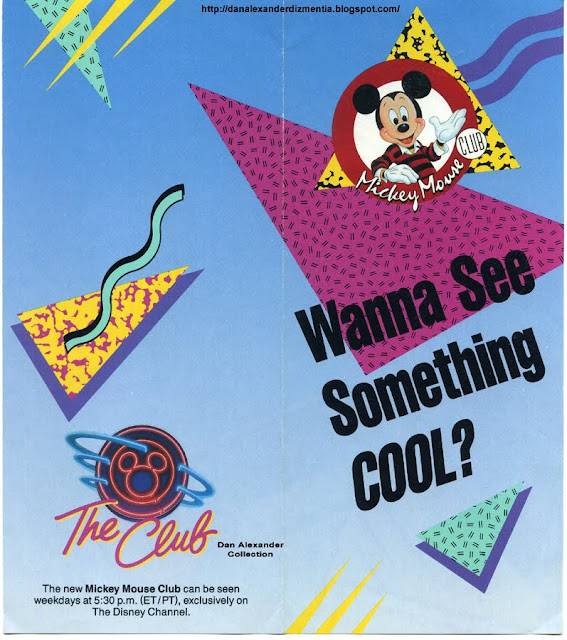 Tiffini and Damon think you'd be a good member of The Club. 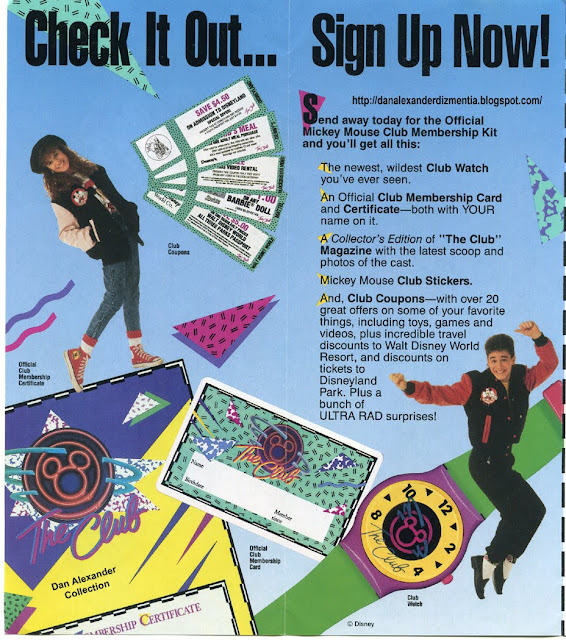 "The Club" shorthand seems to signal the beginning of the "MMC" and dropping "Mickey Mouse" from the name.

How do you get into The Club? You buy your way in! Life is like that. 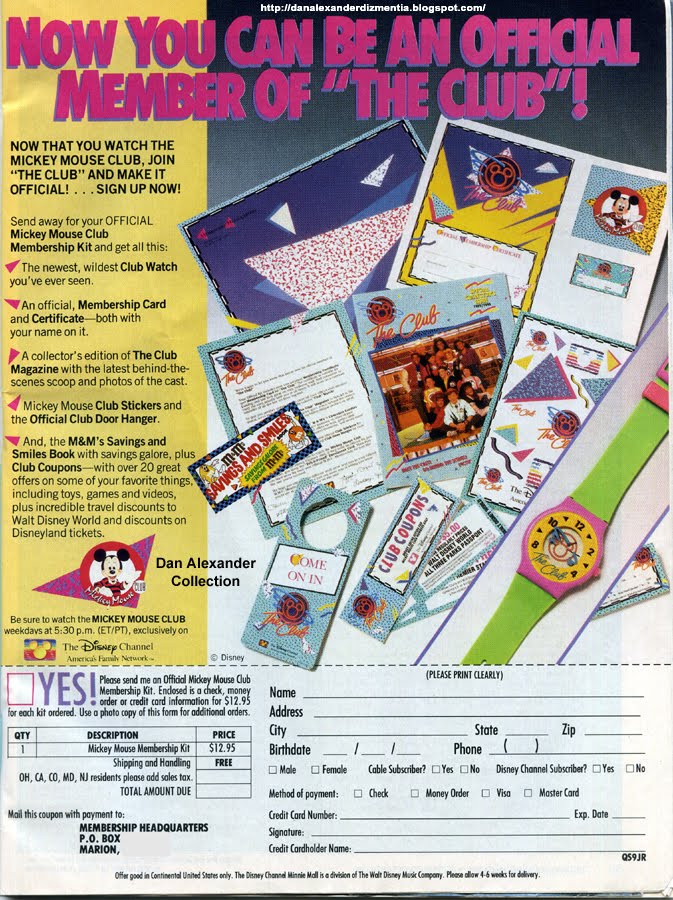 New cast members were always being introduced to the show. Some new members of the Mickey Mouse Club, I mean MMC, for 1990 were Jason Minor, Marc Worden, and Mylin Brooks. 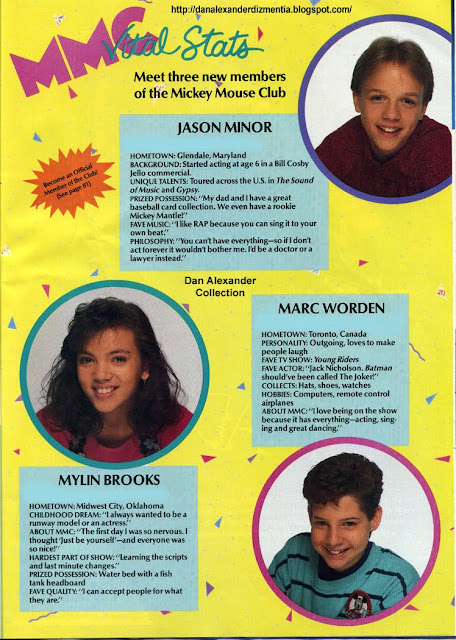 Before Jason Priestley was Brandon Walsh on "Beverly Hills 90210", he played a greaser named Buzz Gunderson on "Teen Angel," a serial featured on The Mickey Mouse Club in 1989. 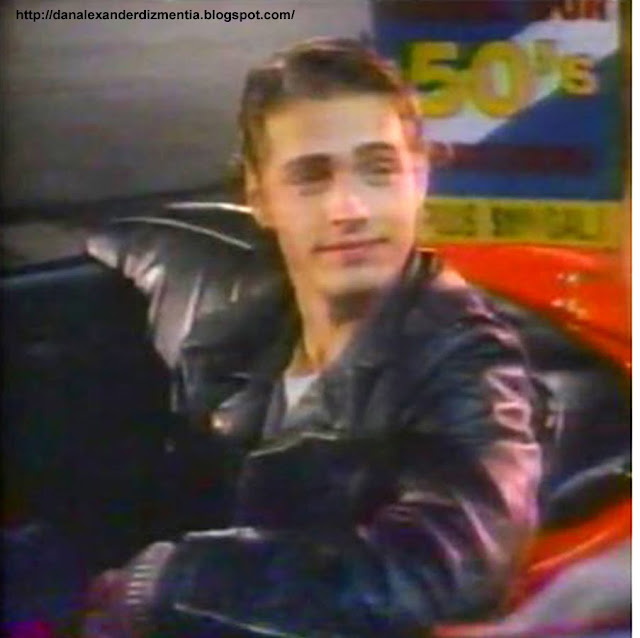 Around the same time Jason Priestley was a 1950s biker guardian angel on "Teen Angel," he was a cast member on the TV series "Sister Kate." I vividly remember this long-forgotten show because one episode featured Milli Vanilli singing "Blame It On The Rain." I don't care if they did lip sync---I liked them!

Disney had another "Teen Angel" series on ABC's TGIF lineup in 1997, featuring Maureen McCormick (Marcia Brady from "The Brady Bunch").

In 1990, The Mickey Mouse Club/MMC had a new band called The Party. 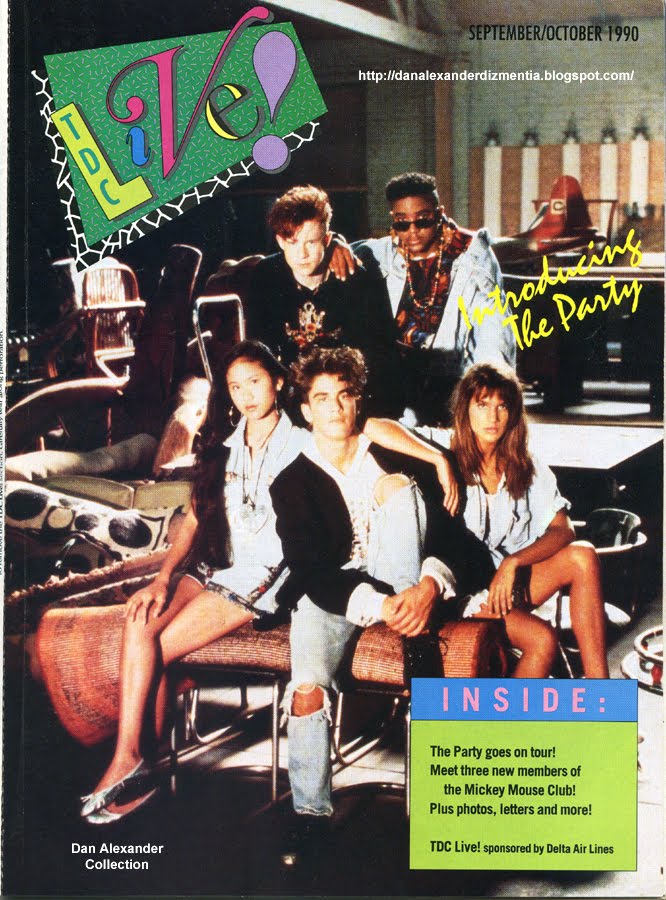 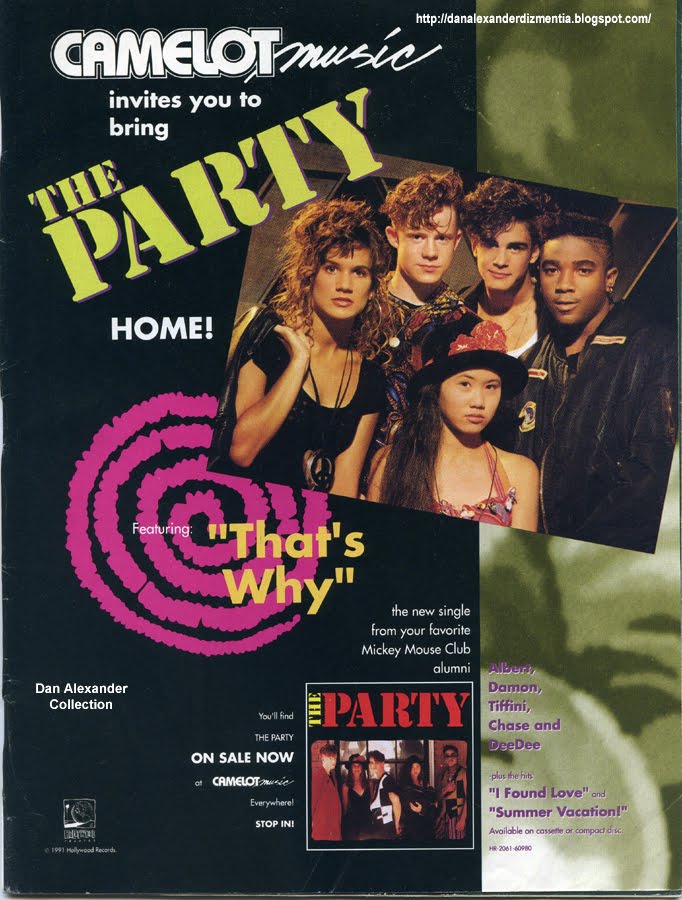 The Party got its name through a contest held by The Disney Channel. 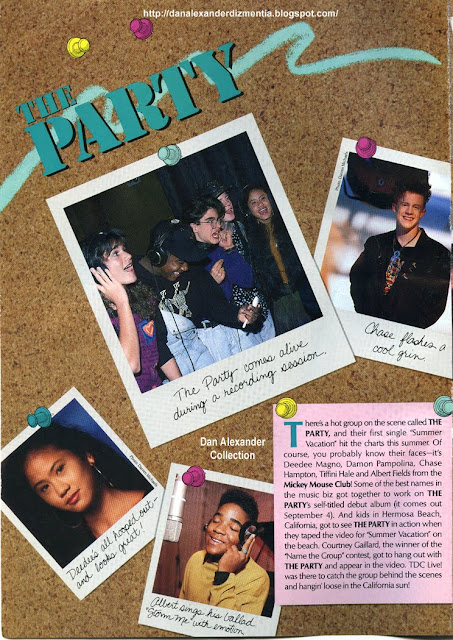 The Party did quite a bit of touring. I thought their song, "Summer Vacation" was catchy! 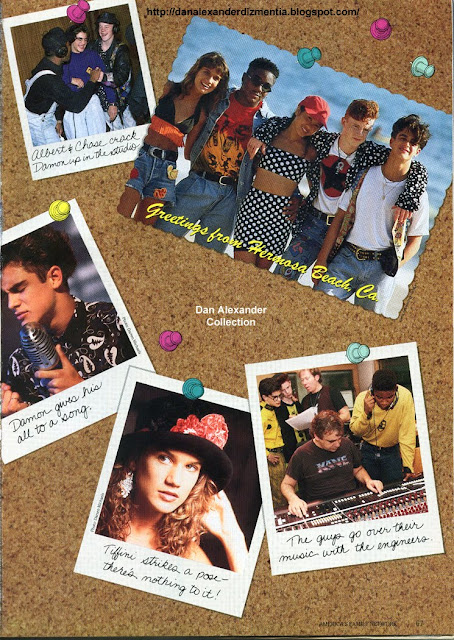 Delta Air Lines was "The Official Airline of Disneyland and Walt Disney World" and presented The Party Tilyadrop Tour. 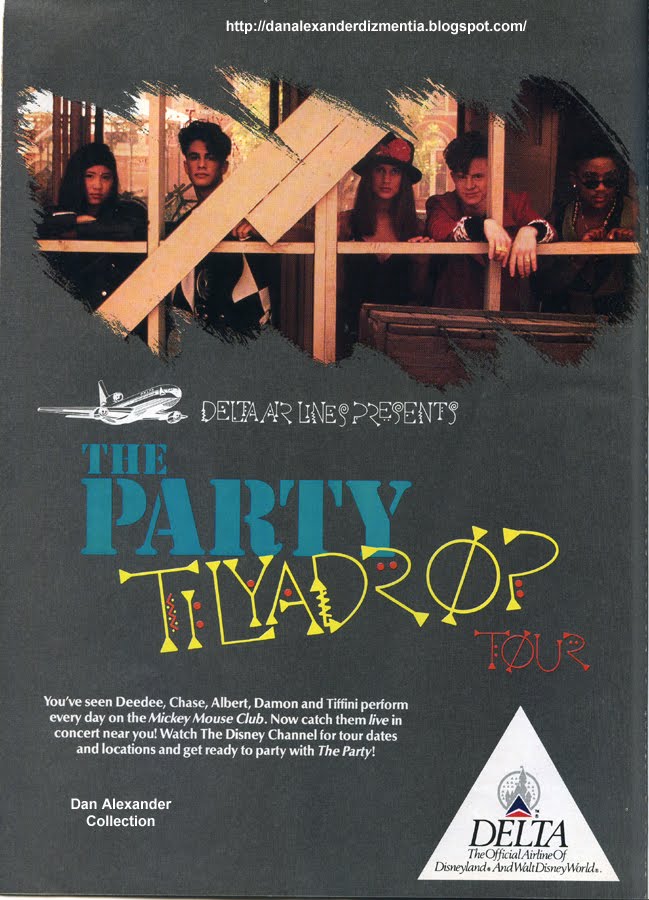 UPDATE April 7, 2014:  The Party is back together (except for Tiffini) and can be found at www.ThePartyAintOver.com.  Their new tune, "Salute to Summer" is pretty darn catchy!  Damon can still bust a move.

For more fun with the MMC, check out Time For The New Mickey Mouse Club, Kids Incorporated, and More!

Posted by Dan Alexander at 5:23 PM