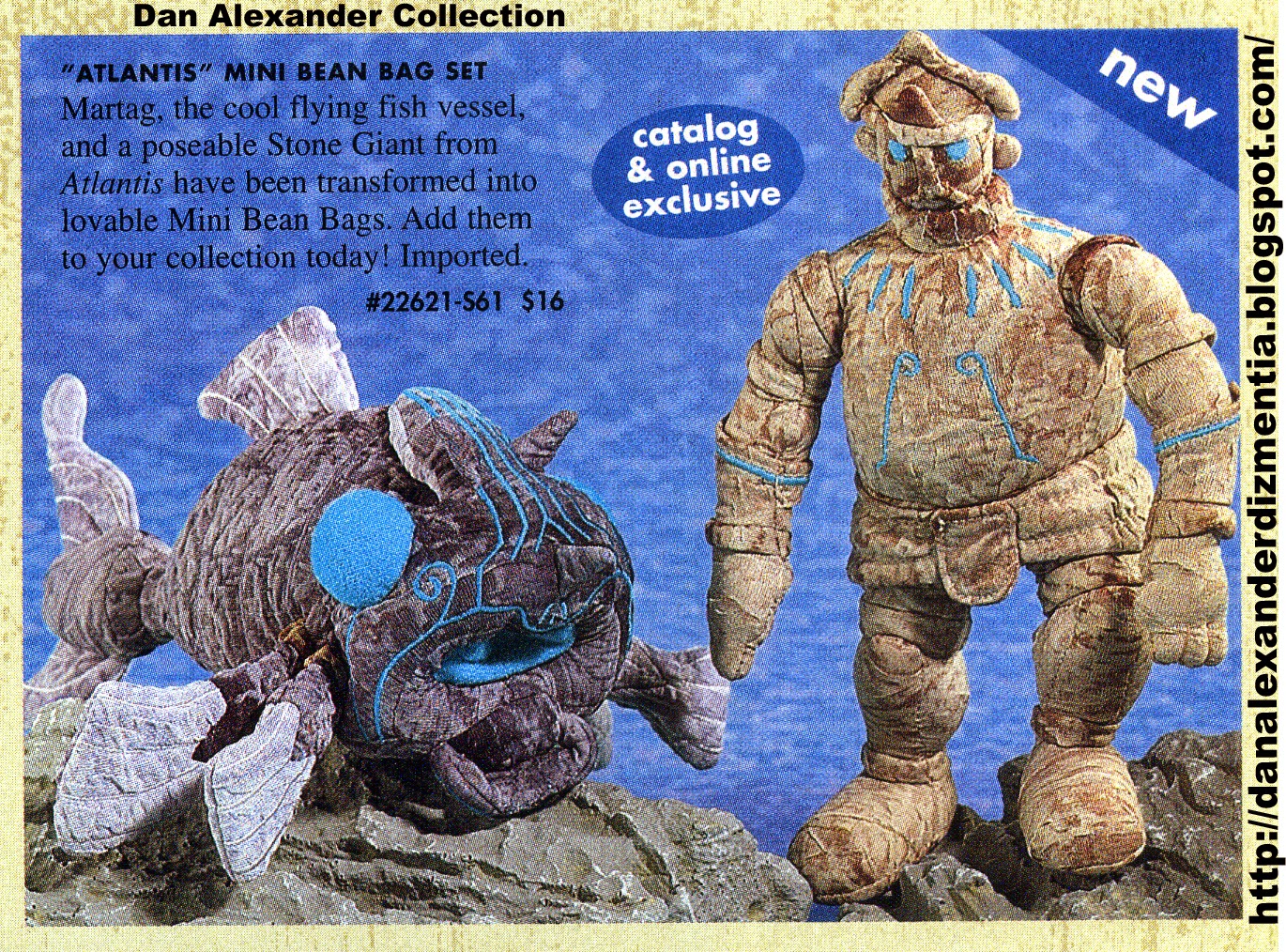 I wonder if children who saw Disney's 2001 animated film Atlantis: The Lost Empire begged their parents for bean bag toys of the Martag fish vehicle and the Stone Giant.  Who would not want to cuddle up with a menacing Stone Giant?

With Frozen doing big business these days, it is interesting to look back at Atlantis and wonder how things would have been done differently with Princess Kida today.  Kida (voiced by Cree Summer) is exotic looking and has Queen Elsa's platinum blonde hair.  She really should have been the star of Atlantis.  Think of all the dolls that could have been sold.  Instead, the focus was on dozens of other characters.  This movie could have been Disney's answer to Grease 2 (I know that is not necessarily a good thing, but hear me out). The main character in Atlantis: The Lost Empire is Milo Thatch (Michael J. Fox), a huge nerd.  Milo meets Princess Kida and by the end of the movie, Milo is wearing a Hugh Hefner robe (see the Milo doll) and Kida and Milo are a couple.  Kind of what happens in Grease 2.

There were big plans for Atlantis, including an animated TV series.  The series morphed into the 2003 video sequel Atlantis: Milo's Return.

When I first heard about Disney's Atlantis movie, I really hoped it would be about the legendary race of fish folk living in Atlantis, as portrayed in the 20,000 Leagues Under the Sea attraction that opened at Tokyo DisneySea in Japan back in 2001.  That would have been something really different.

Posted by Dan Alexander at 11:54 AM No comments: When I first saw the 2002 film Treasure Planet, I thought "This should have been a computer animated movie."  The similar 2000 hand-drawn/CGI hybrid Fox Animation Studios Titan A.E. faced similar box office woes.  It's a shame, because Treasure Planet has quite a bit to like, including Jim Hawkins (Joseph Gordon-Levitt) and John Silver (Brian Murray).  Aside from a McDonald's Happy Meal tie-in, Treasure Planet merchandise was tough to find.  The plush toys sold at Disney Stores were among the best items I saw.  Filmmakers thought of the part-mechanical Silver as an alien bear creature, and he translates well as a stuffed toy.

Instead of a parrot, Silver has the shape-shifting Morph. 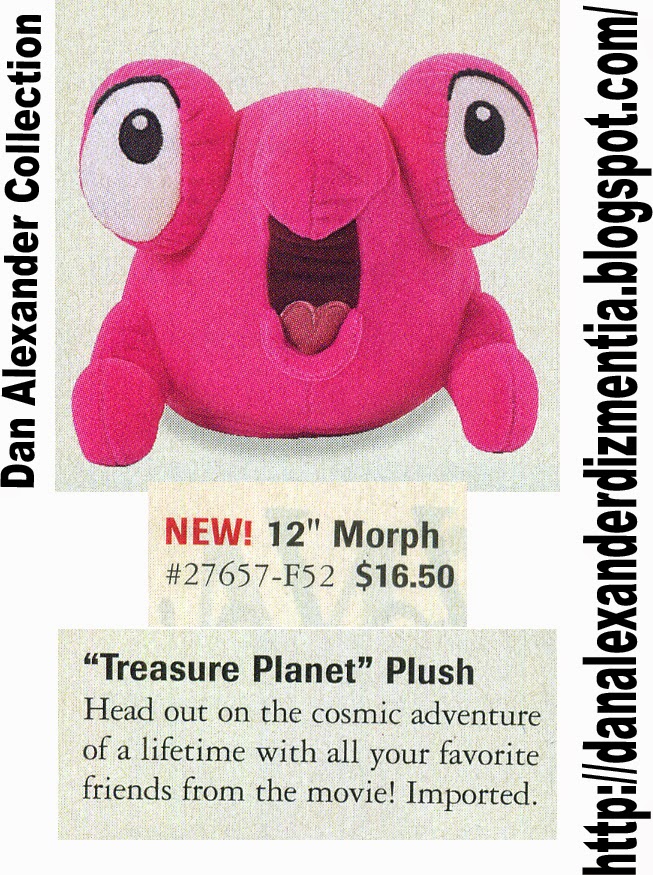 An intergalactic spin on Treasure Island by Robert Louis Stevenson, the film even did something different for the music.  The songs were performed by John Rzeznik from The Goo Goo Dolls. 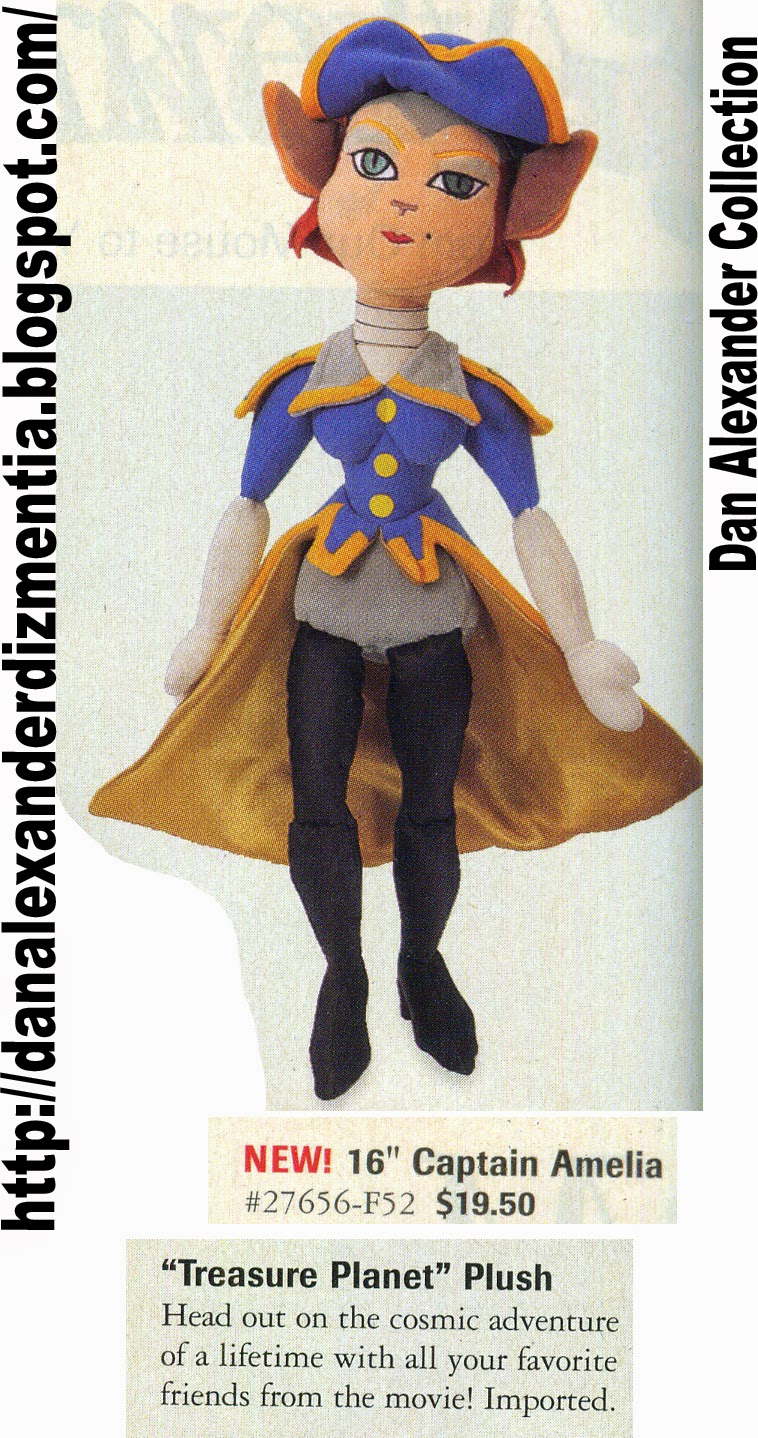 Insane robot B.E.N. (Martin Short) was used frequently in the marketing campaign for Treasure Planet.  Maybe that scared some people. 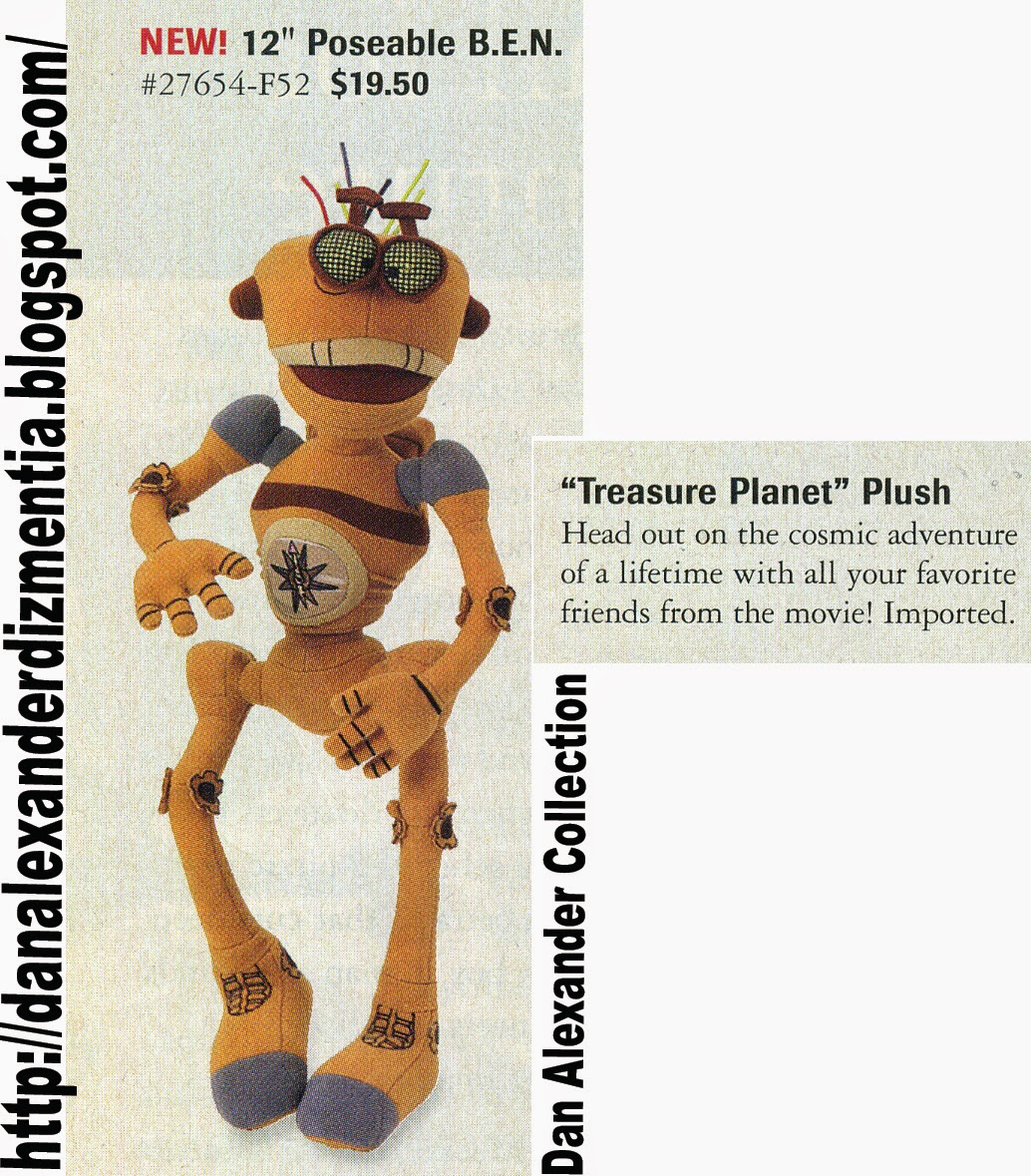 I think a live action Treasure Planet starring Joseph Gordon-Levitt probably would do well these days.  I bet someone could talk Emma Thompson and David Hyde Pierce into wearing prosthetic cat and dog makeup.
Posted by Dan Alexander at 7:38 PM 2 comments: