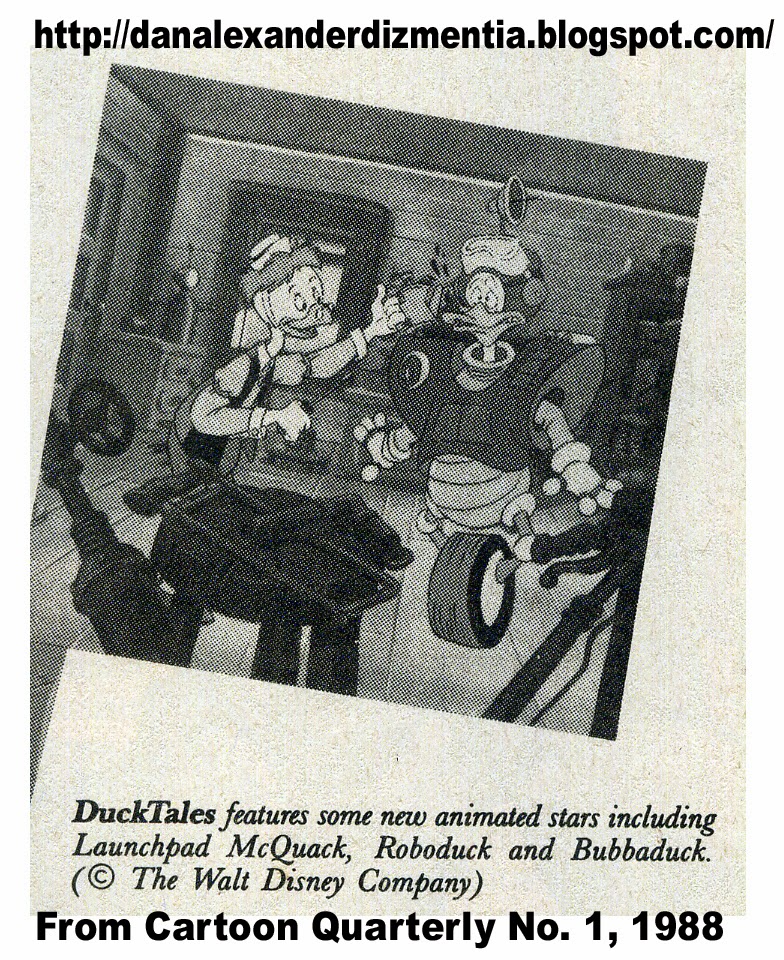 When Disney's syndicated animated series DuckTales debuted on TV in 1987, it was a huge hit.  The 65 initial episodes were so well received that an additional 30 were ordered up with some new characters.  The first new character to show up was cave duck Bubba (voiced by Frank Welker).  The next new character was Roboduck.  Wait, who?!?  Yes, the character that would be known as Gizmo-Duck (voiced by Hamilton Camp) was originally called Roboduck.

Roboduck, Bubbaduck and an alien "Spaceduck" were pitched by Disney TV's Tad Stones as new character ideas for DuckTales.  Apparently, they were not part of some master plan or vision for the show.  The alien duck character did not make it to the series, but the other new characters were chosen simply based on drawings and a description.

The 1988 issue of Cartoon Quarterly Magazine (created by Gladstone Publishing) gave an early peek at the new characters.  I can still remember discovering this magazine at a grocery store when I was a kid. 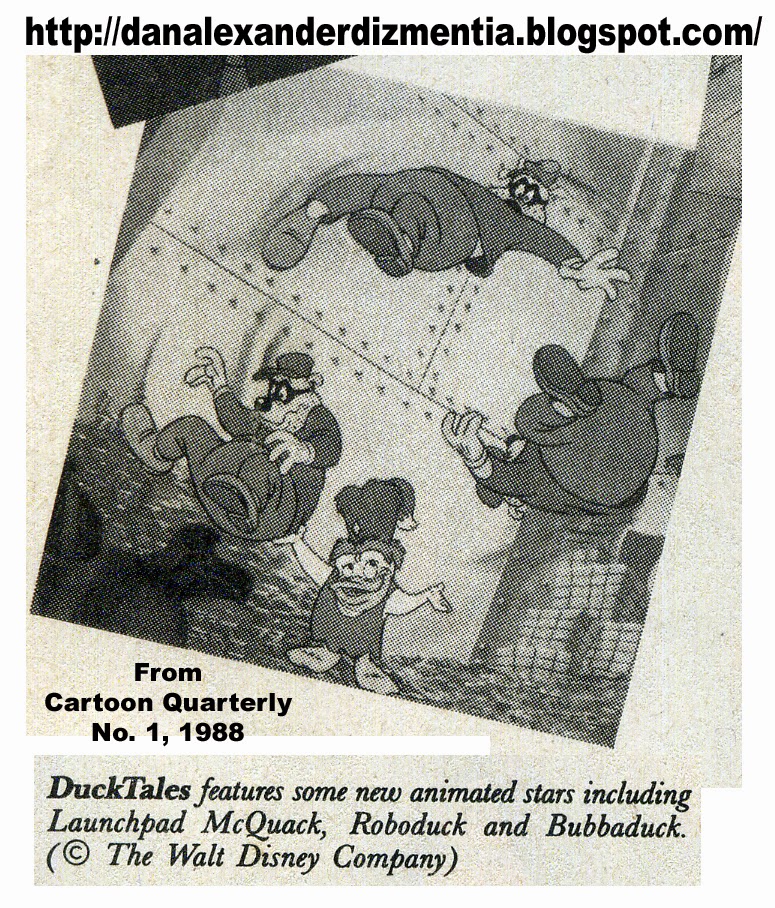 This first (and only?) issue of Cartoon Quarterly has an article called Bear and Duck Tales---Disney Animation Comes to TV by John Cawley.  It is interesting to see the early designs for Bubba and Roboduck.

Bubba seemed to quickly become a background character in the series.

The character of Fenton Crackshell, and his alter ego Gizmo-Duck, would have a much bigger impact.  Super DuckTales aired on NBC during Easter of 1989, introducing the new superhero to the series.  Gizmo-Duck pretty much became the focus of most of the new stories on the syndicated TV show.  Some of them are pretty wild, including my favorite episode, Metal Attraction, which includes a parody of Disneyland and a robotic maid who is madly in love with Gizmo-Duck. 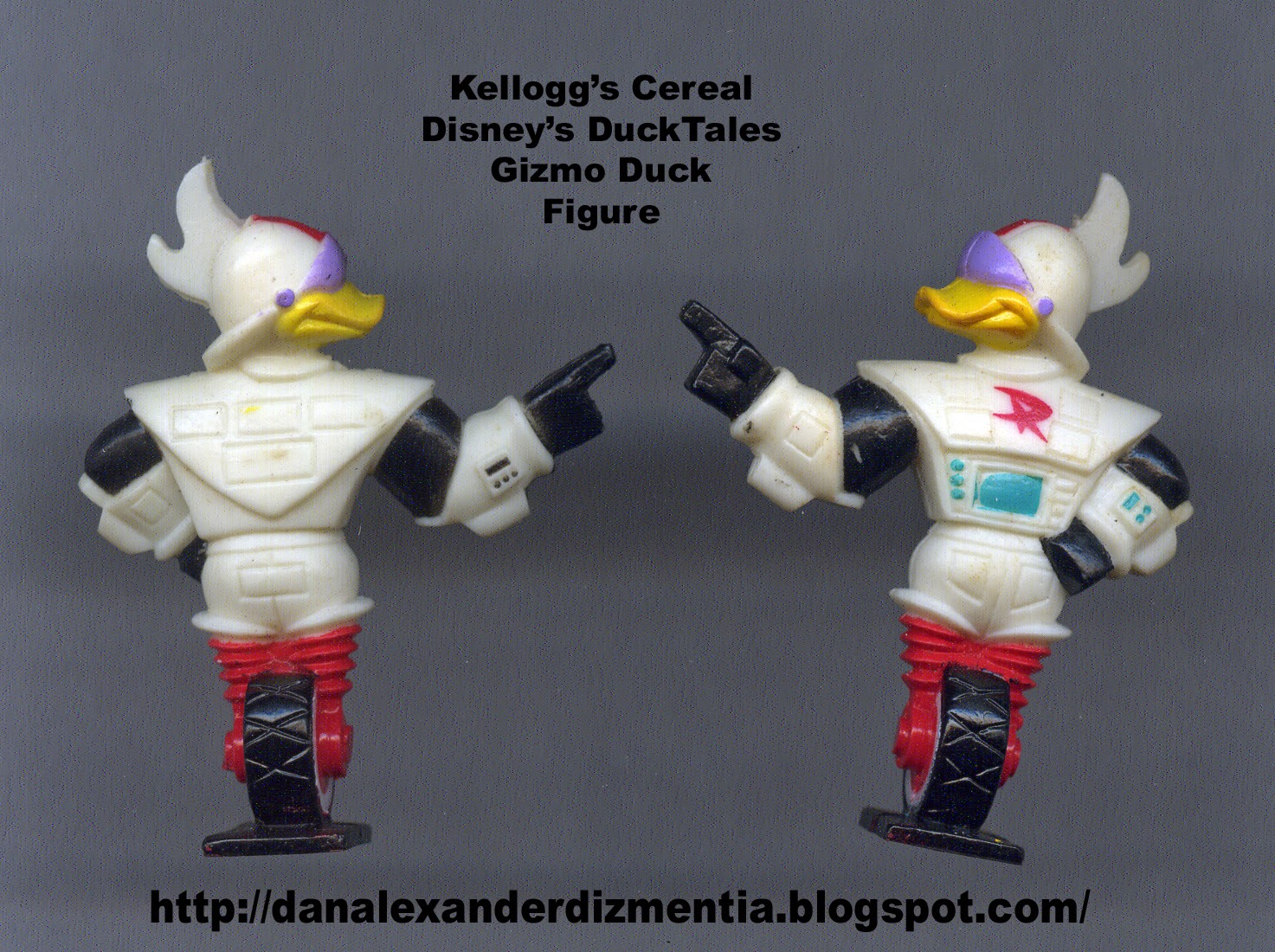 Gizmo-Duck appeared in comic books and video games, and in episodes of Disney's 1991 series Darkwing Duck along with fellow transplanted DuckTales cast member Launchpad McQuack.  The Gizmo-Duck character also was included in a DuckTales Kellogg's cereal figurine promotion for The Disney Afternoon.

Curiously, Bubba and Gizmo were not in 1990's theatrical DuckTales the Movie: Treasure of the Lost Lamp.  The movie added a new "kid" Genie character (voiced by Rip Taylor) who seemed to be added to the cast at the end of the film (sort of a Bubba 2.0), though he never appeared in the TV series.  The movie's thief character, Dijon (voiced by Richard Libertini) appeared in the last episodes of the DuckTales TV series.

Frank Welker (Bubba) is a voice over legend, appearing in countless TV shows and movies over the years (if there's an animal in a movie, chances are good that Frank Welker provided its voice).

The late Hamilton Camp (Fenton/Gizmo-Duck) was a prolific musician and actor, and appeared on-camera in movies and in TV shows like Three's Company and WKRP in Cincinnati. 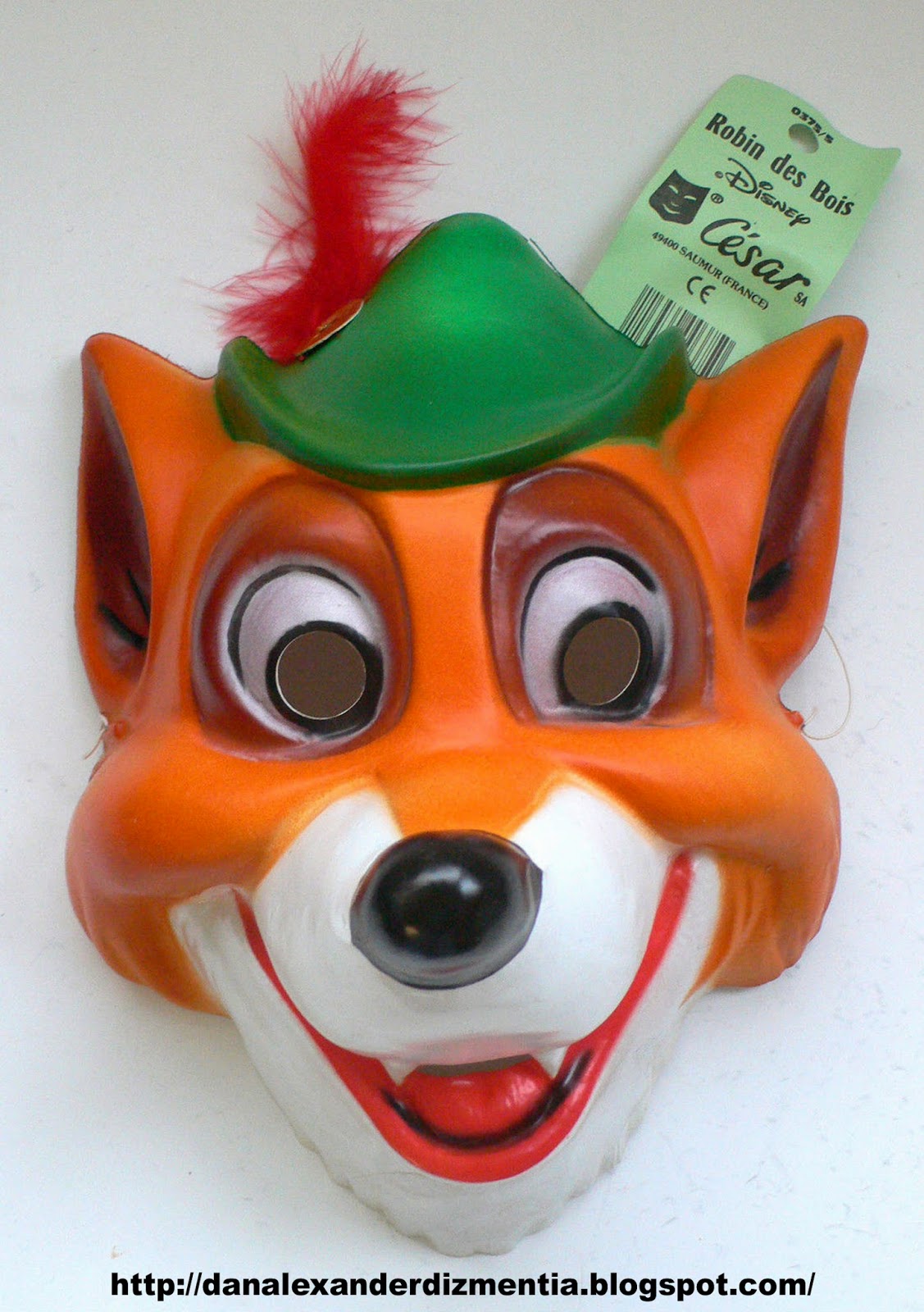 There's something about animated Disney foxes.  As a kid, I particularly enjoyed The Fox and the Hound, as well as the Splash Mountain log flume attraction at Disneyland and Walt Disney World (starring Brer Fox).  Sometime in the early 1980s, Robin Hood was re-released in movie theaters, and I was obsessed with the film just by seeing the commercial for it on television.

I would have asked for any Robin Hood toy that was available, but at the time, there wasn't much of anything available.  No Robin Hood action figures, no plush toys, nothing!  There were books and records, of course, but not much else.  It seems like there was a good assortment of merchandise when the movie was released in 1973.  And Robin Hood (aka Robin des Bois) has appeared on some keen loot in Europe. 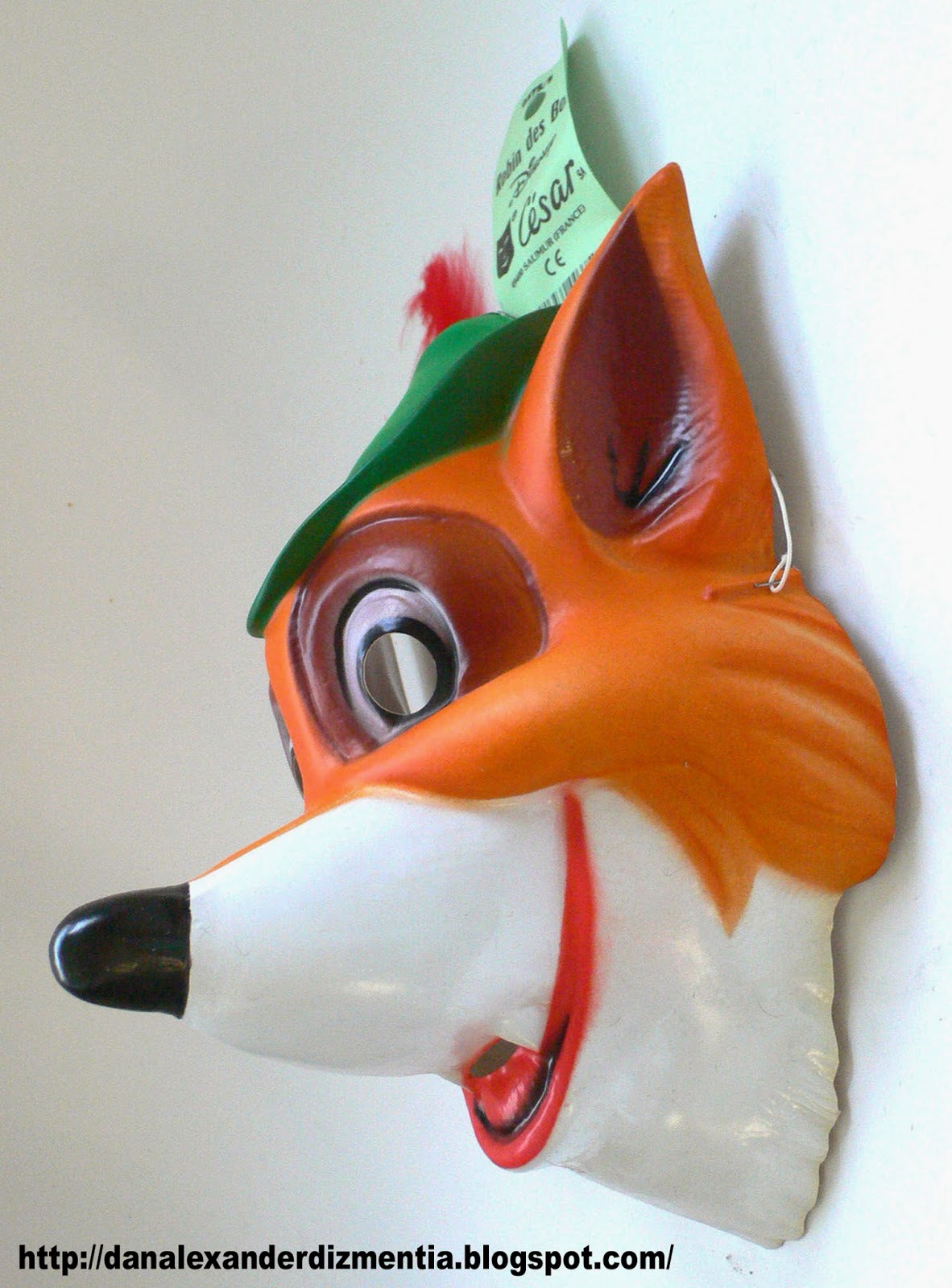 Robin Hood is notorious for stealing from other Disney films.  The "Phony King of England" sequence directly lifts animation from Snow White and the Seven Dwarfs, The Jungle Book and The Aristocats. 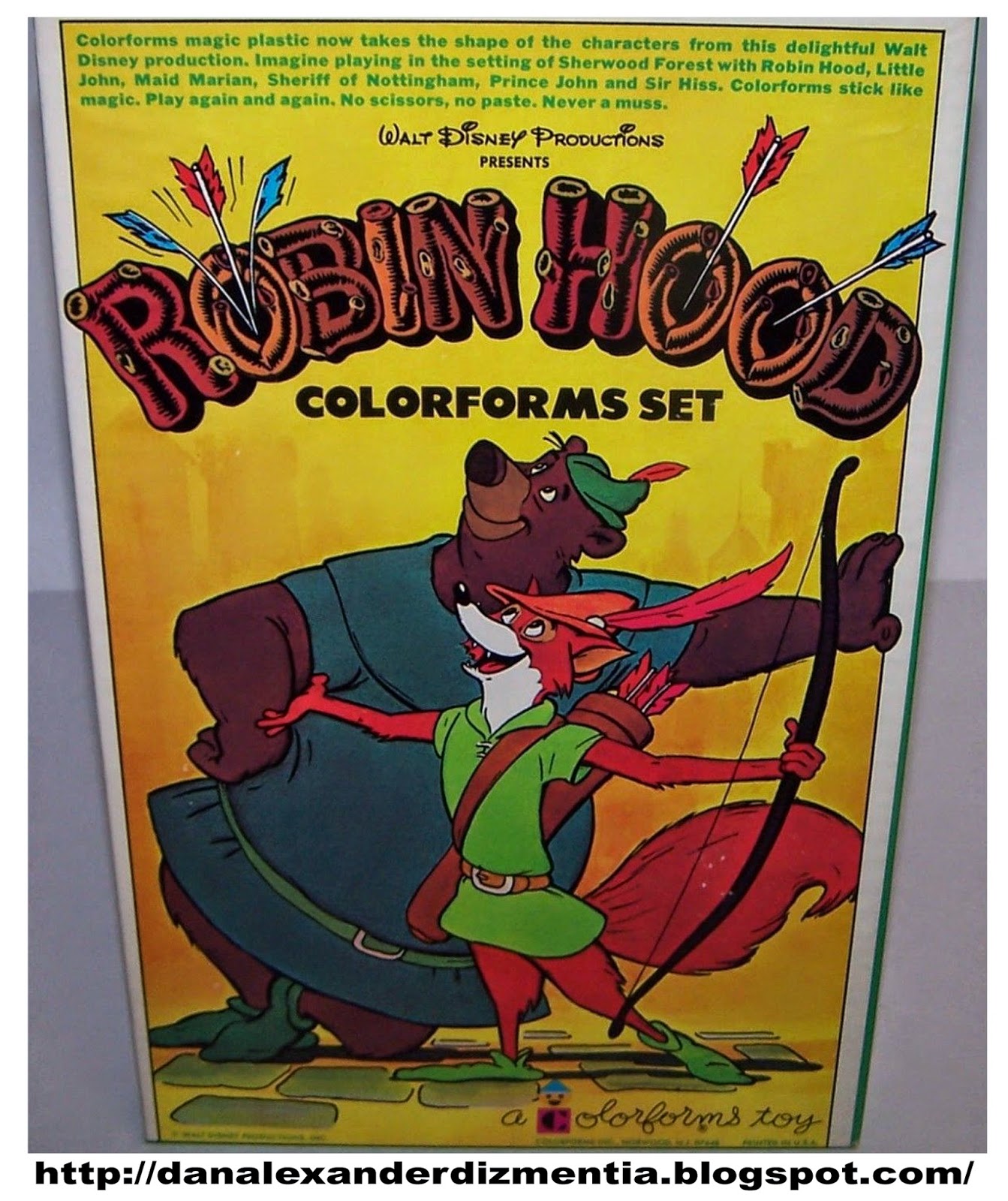 My hunch is that Robin Hood got a redesign during production to make the character seem more handsome and less comical.  Quite a bit of early merchandise shows this long-snout Robin Hood. 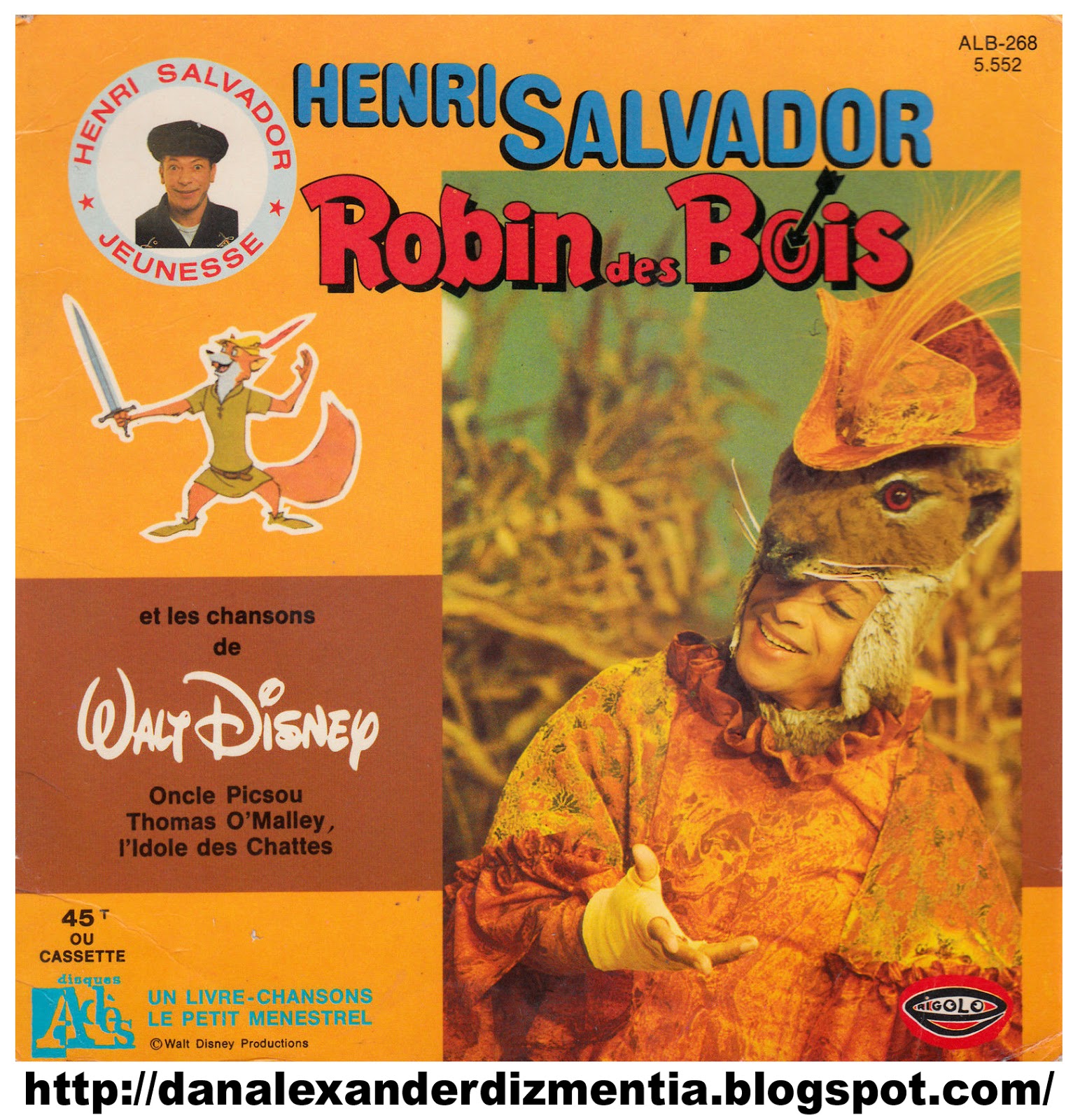 I would totally see Robin des Bois if it was a musical on the stage. 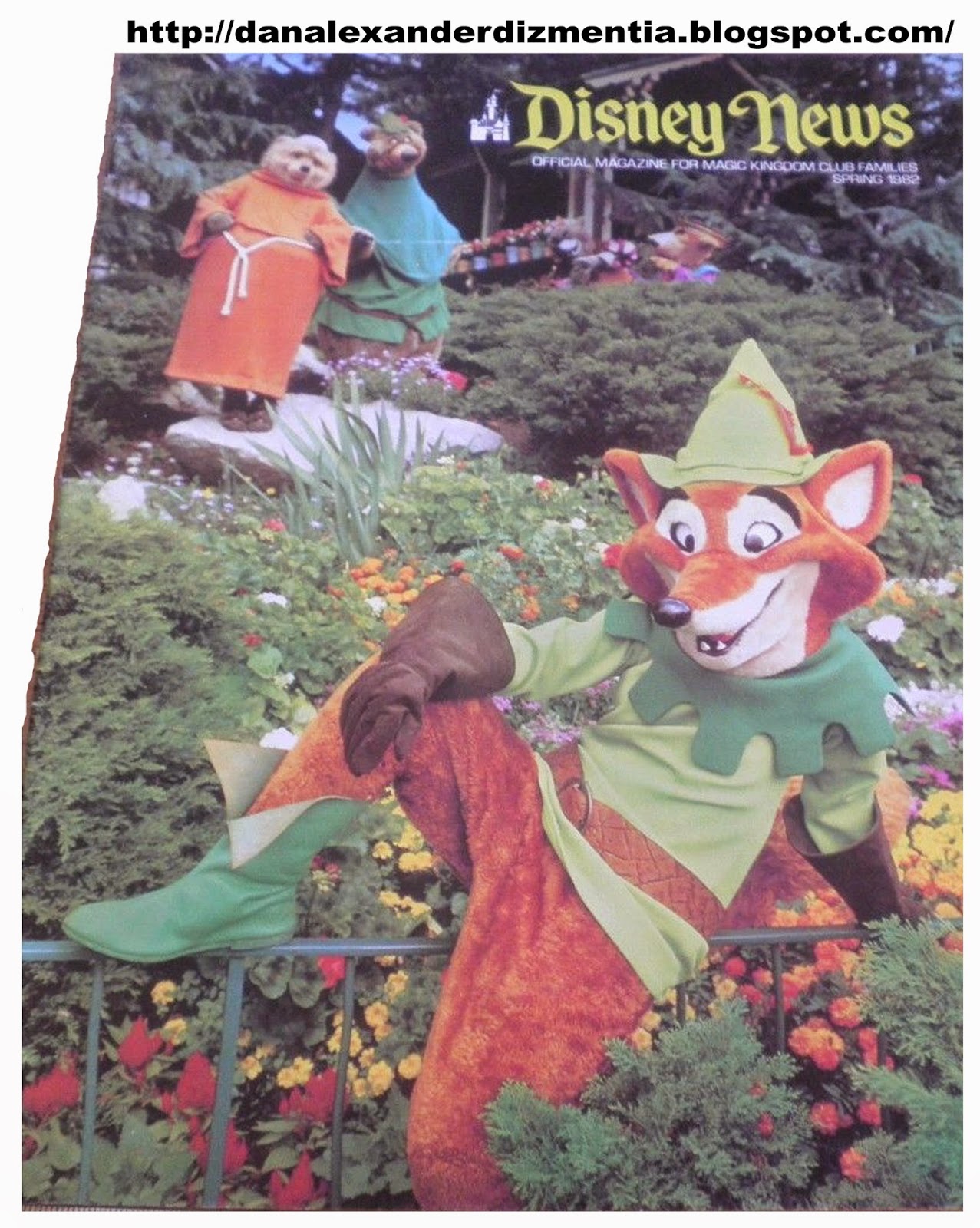 The release of Robin Hood in 1973 meant a menagerie of colorful creatures could invade Disneyland and Walt Disney World.  Note that this version of Robin Hood has a long snout and pointy nose.

Updated versions of Robin Hood and Little John appeared in the 2012 "Disneyland" episode of the TV series Modern Family. 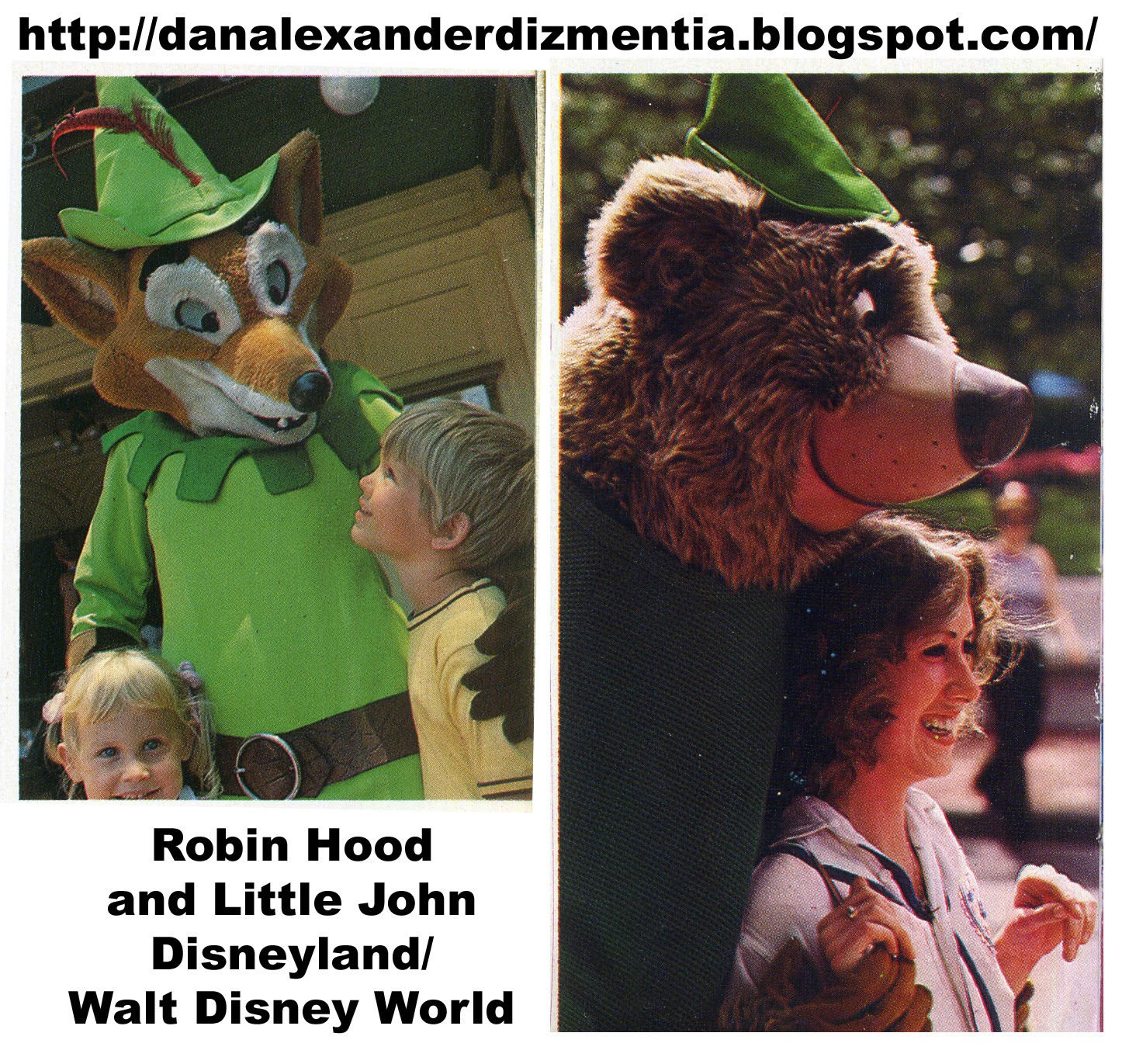 At Walt Disney World and Disneyland  in the 1970s, you could find some great Robin Hood Merchandise. 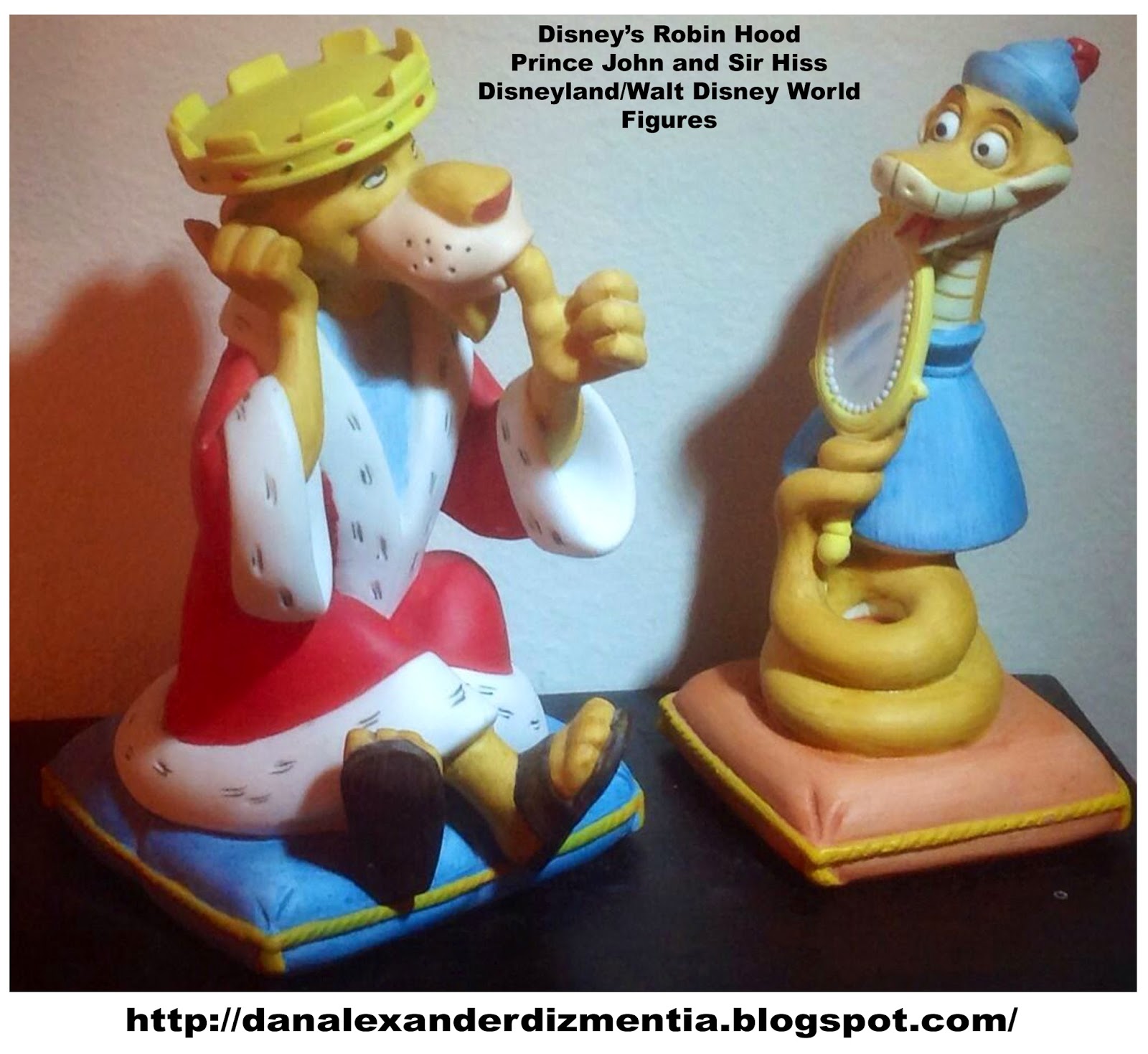 Highly detailed bisque figures of Prince John and Sir Hiss look like they could star in a theme park show.

An extensive line of amazing Robin Hood figures was planned. 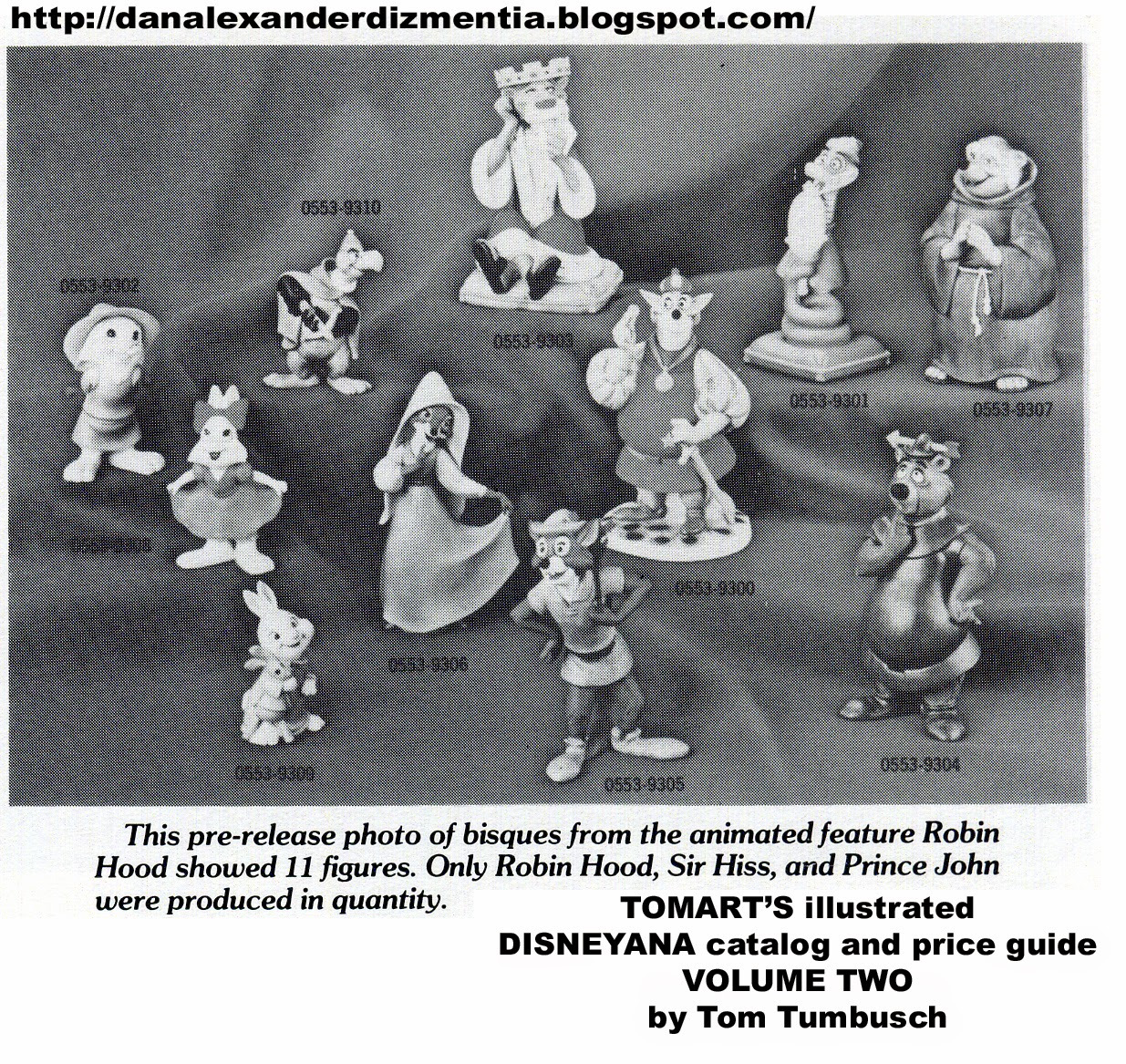 It took many years, but a Robin Hood action figure was finally released.  At McDonald's! 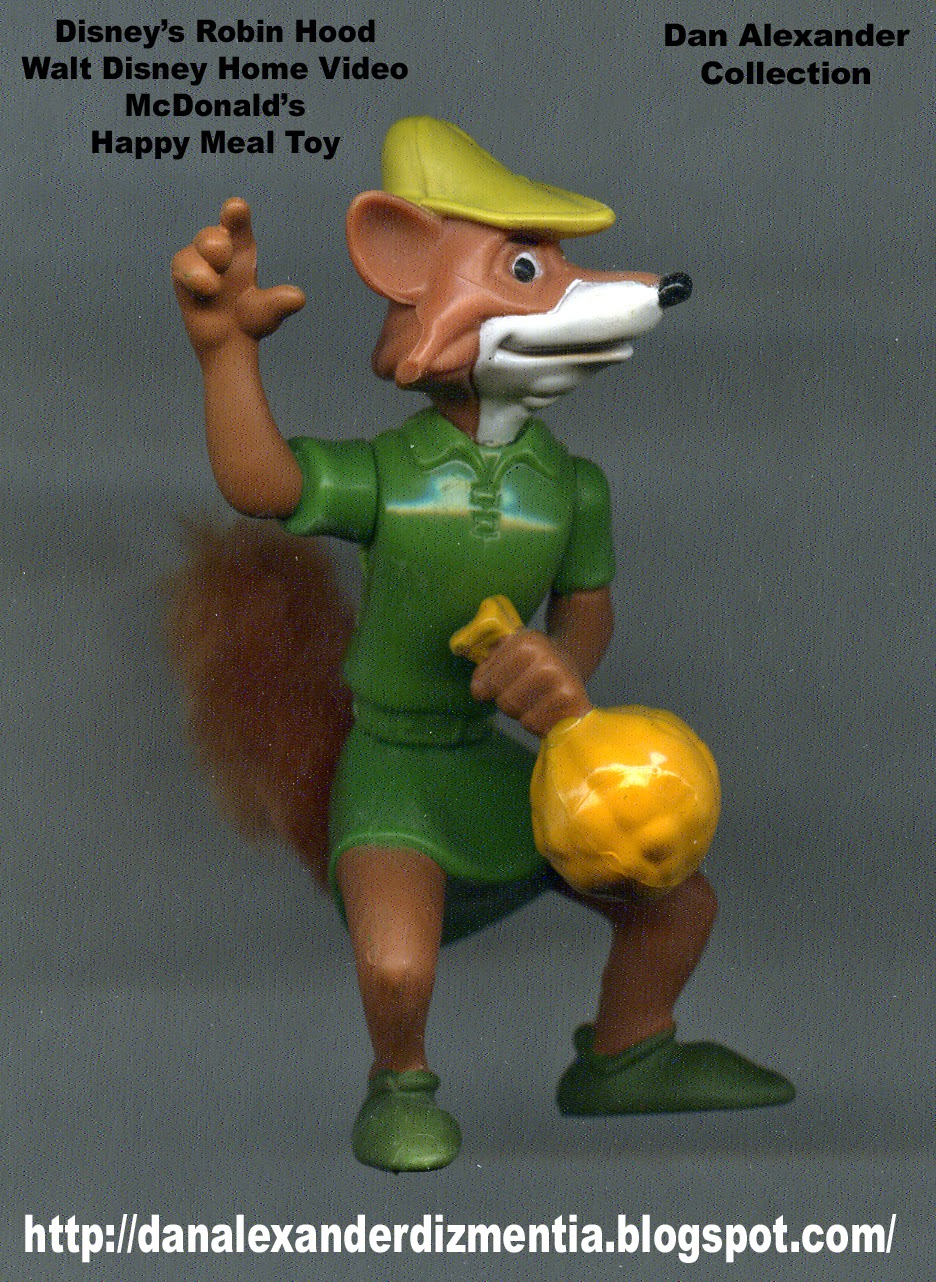 The Robin Hood McDonald's Happy Meal action figure was released in the late 1990s as part of a Walt Disney Home Video promotion.  The figurines were packaged in VHS Tape boxes (remember VHS?). 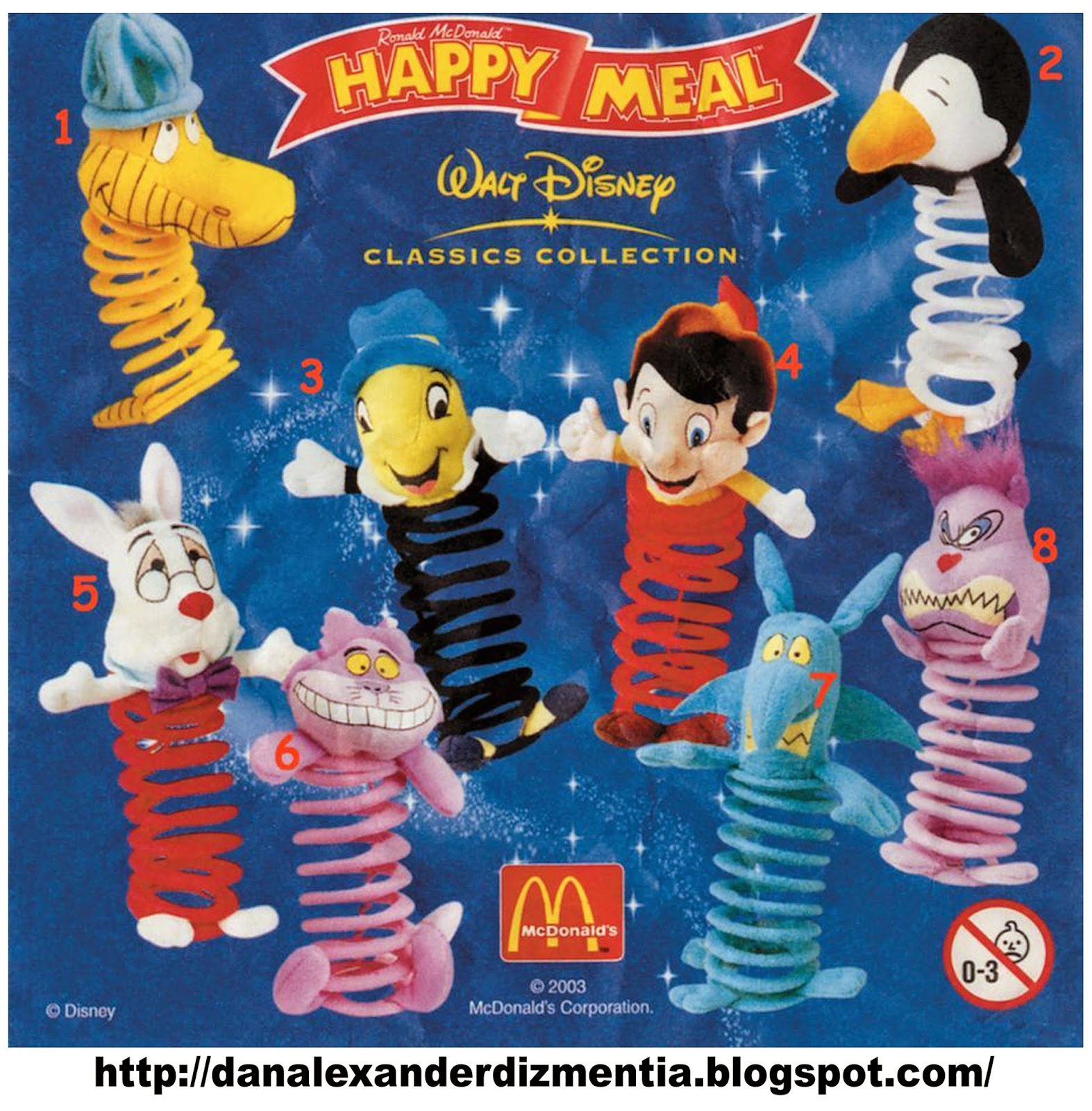 The Slinky Sir Hiss was joined by characters from Alice in Wonderland, Hercules, Pinocchio, and Mary Poppins.

For years, I had never seen a Robin Hood plush toy for sale at a Disney theme park (which is kind of amazing).  Then, I finally saw one. 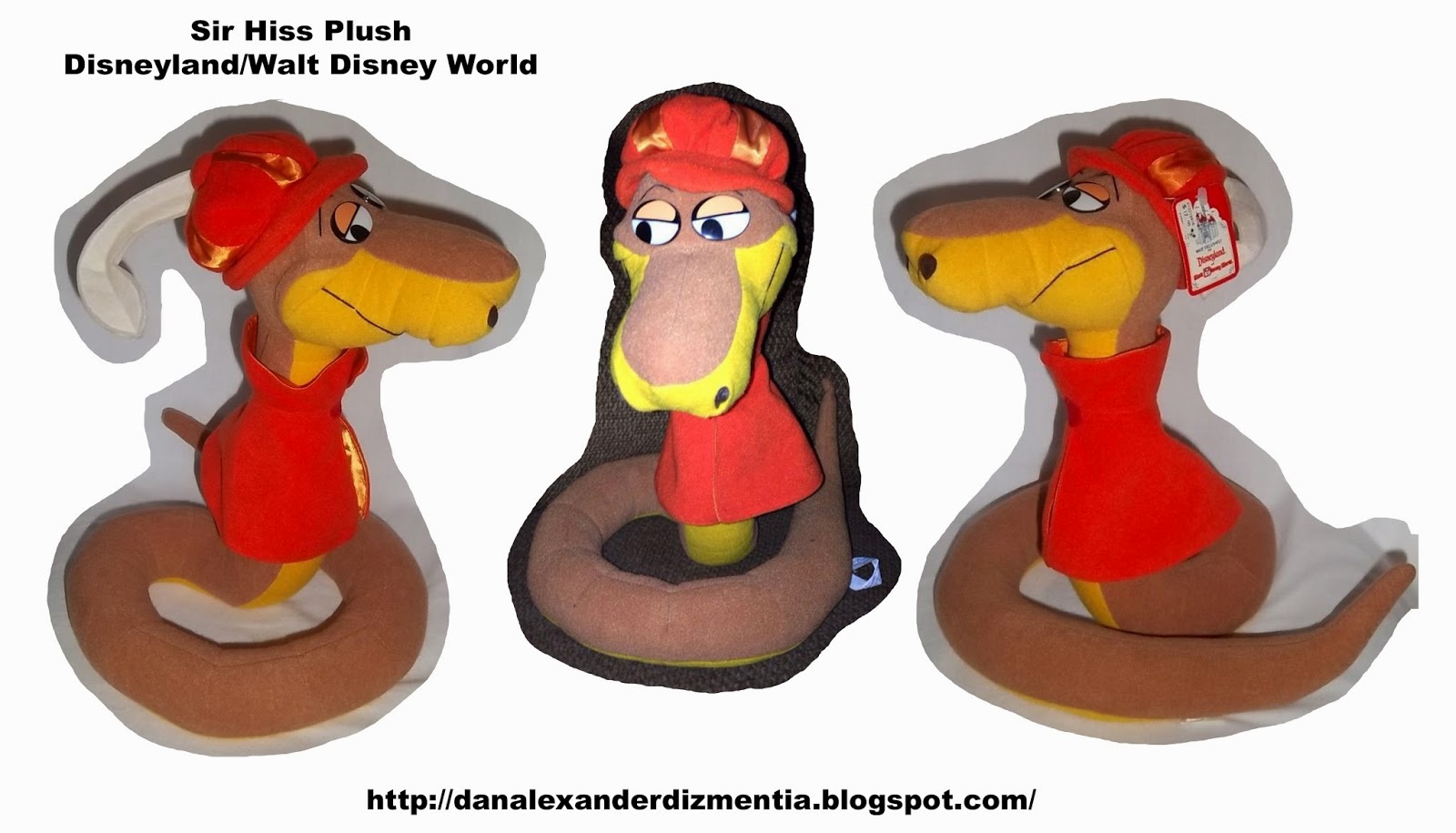 Yes, I finally saw a Robin Hood plush toy for sale at Disneyland in California in the early 1990s, and the character chosen to represent the film was Sir Hiss!  How could this be?  Suspicious snake!

Last night, much to my shock and surprise, I saw for the first time the Android "Animal Buddies" commercial on TV that uses Roger Miller's "Oo De Lally" Robin Hood song.  Robin Hood may not get the press the other popular Disney films get, but he is clearly not forgotten!
Posted by Dan Alexander at 8:46 PM 6 comments: