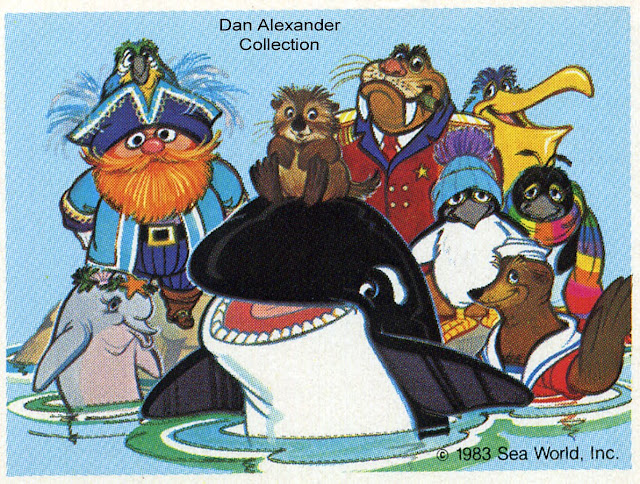 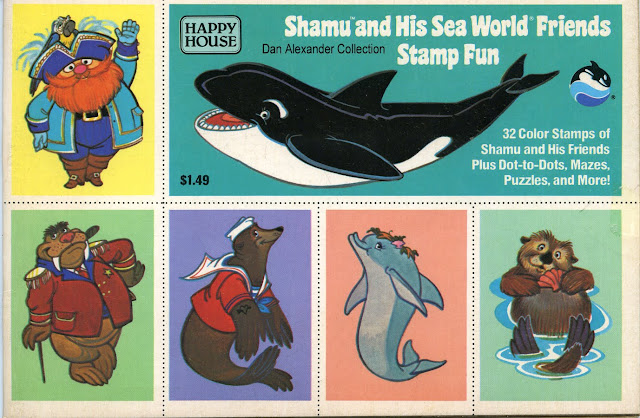 I found this great stamp activity book (from 1983) at a half-price book store many years ago. 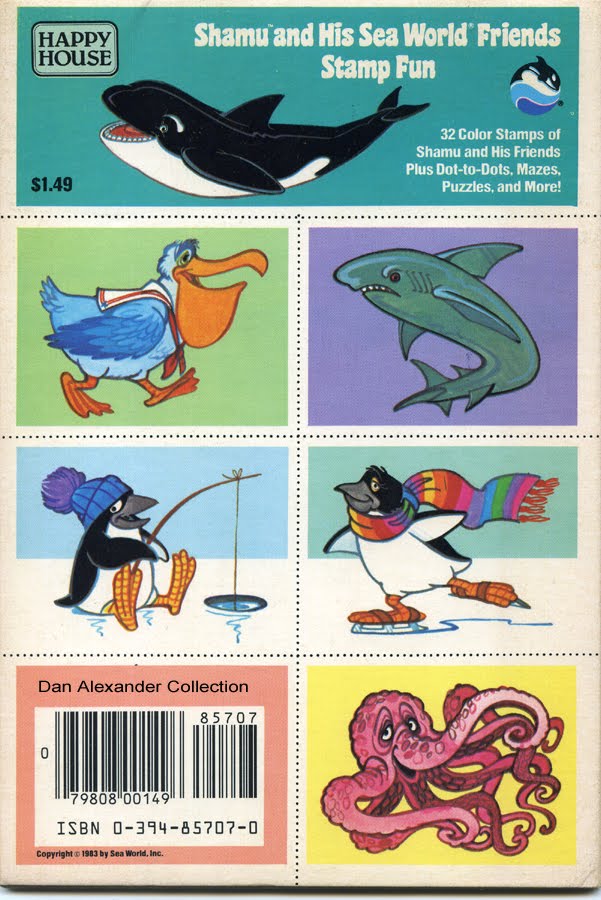 Here's one of the lesser-known Sea World characters, Oscar Octopus. 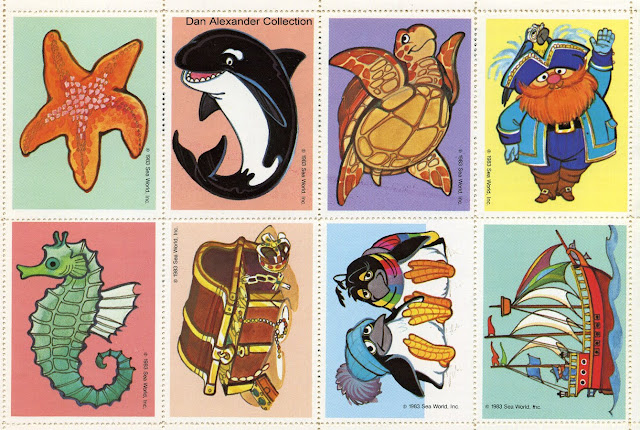 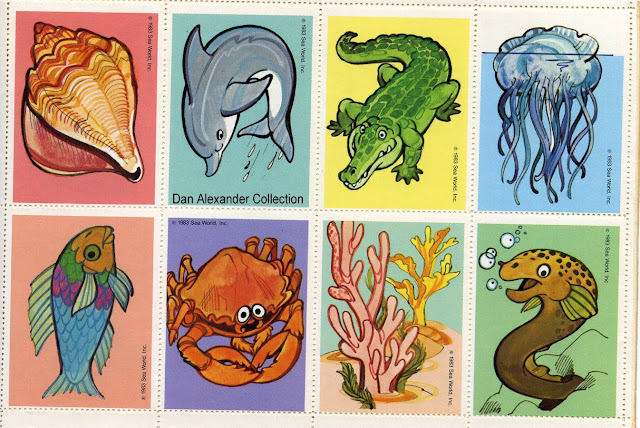 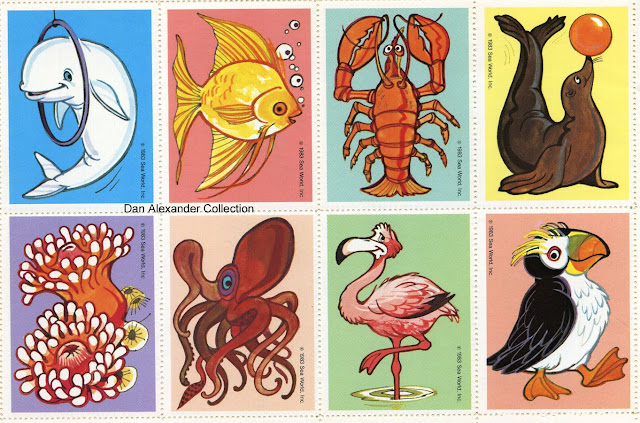 At the same book store (which was nowhere near a Sea World) I found a 1983 coloring book, too! 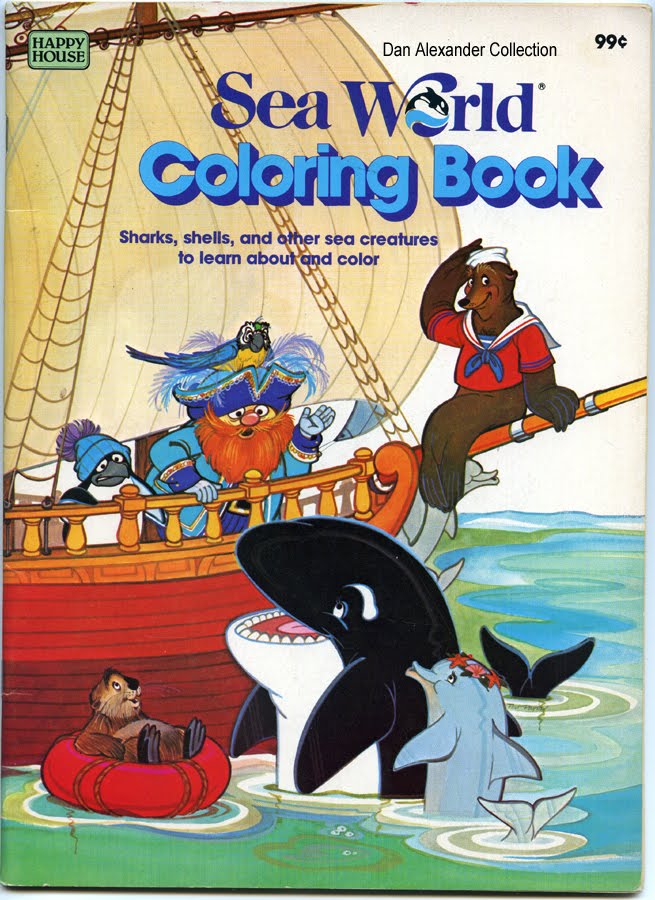 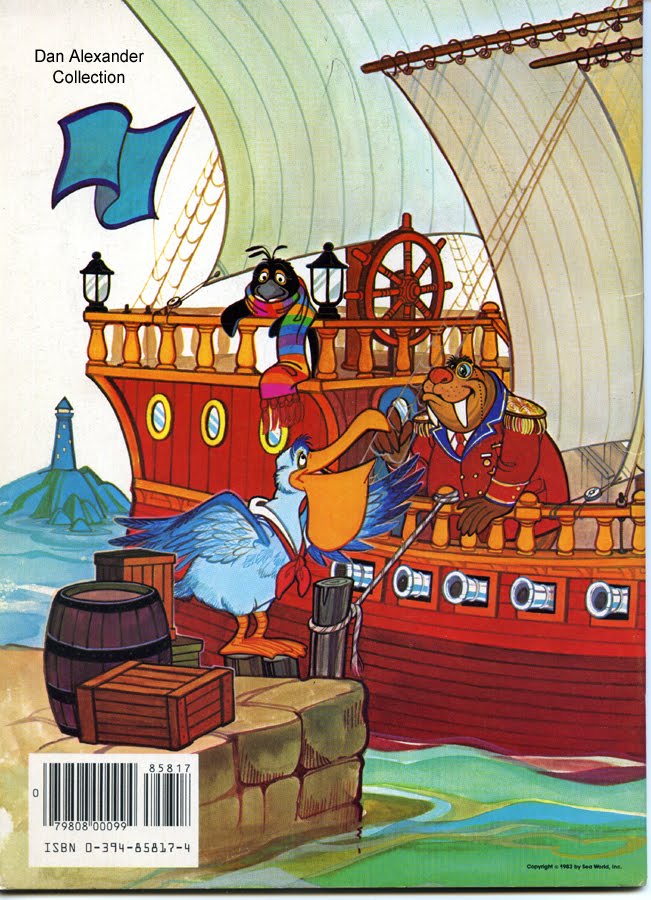 In this book, Shamu and the crew look for a treasure, with the help of Oscar Octopus 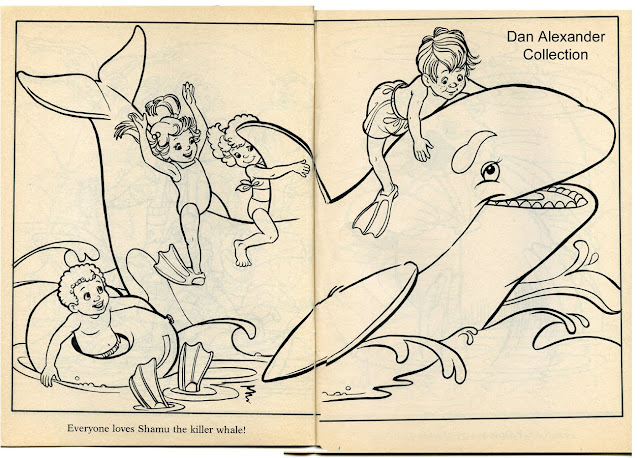 This cracks me up!  "Everyone loves Shamu the killer whale!"  Ha ha!  Kids also love to play with their friend, Stingy the killer bee. 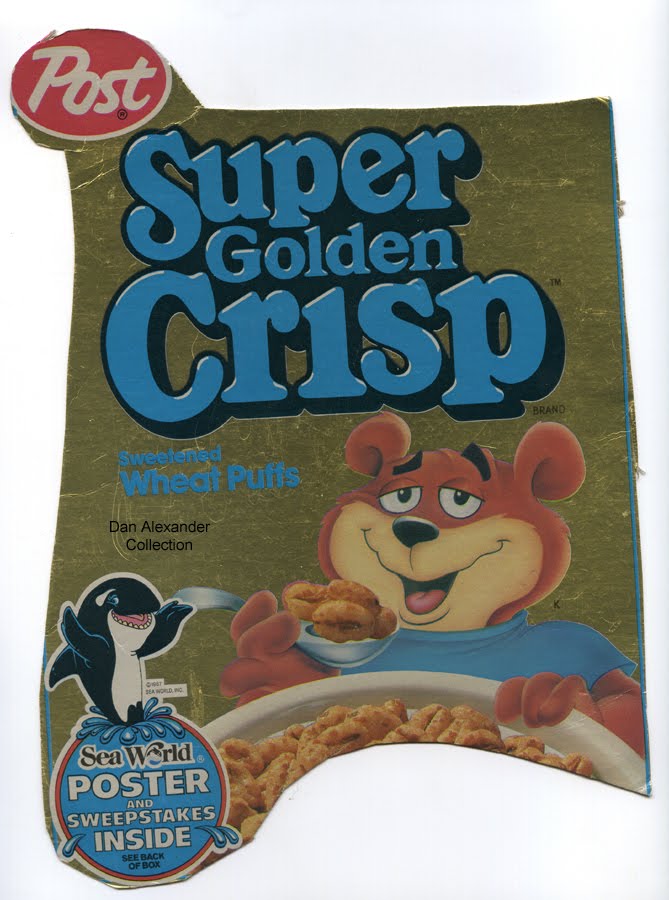 Shamu leaps onto boxes of Post Super Golden Crisp with Sugar Bear in 1987! 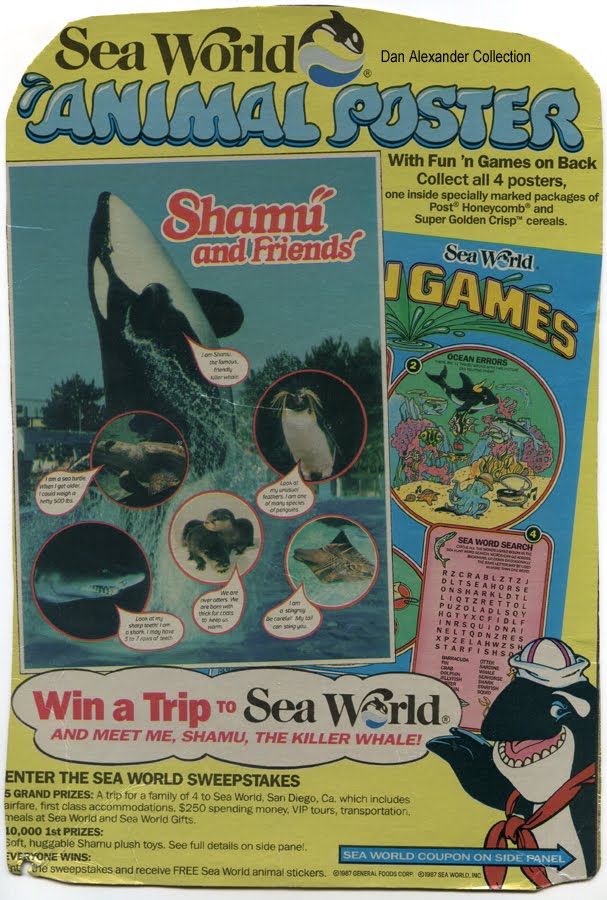 A Sea World Poster and a chance to win a trip to Sea World in California?  I had to get this cereal! 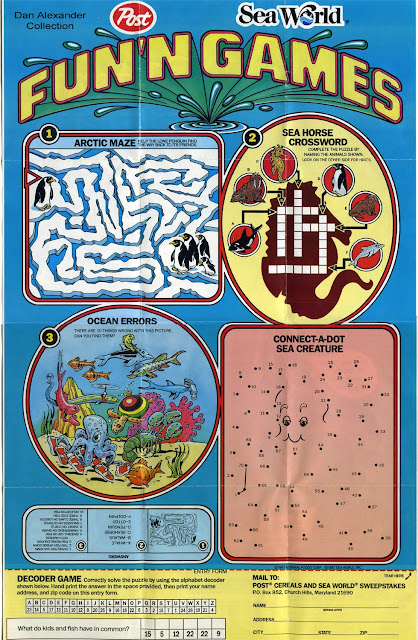 More great illustrated sea life!  The entry form is still here, so I guess I did not enter the contest--what was I thinking? 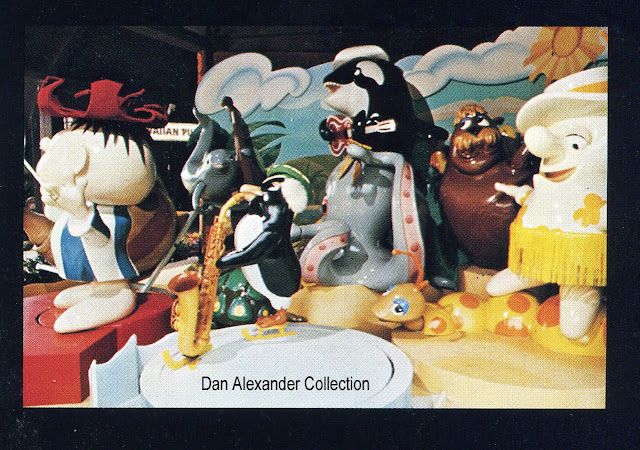 This picture of an animated Shamu show is from a Sea World souvenir book I got at the park in Orlando in 1987.  I never saw this show anywhere, and wondered about it for years.  Thanks to theme park historian and artist Christopher Merritt, I now know that this small show was part of the Hawaiian Punch Village at Sea World in San Diego, California.  There's Punchy and Oaf (the pudgy tourist that Punchy would famously punch--"How'd you like a nice Hawaiian Punch?") performing with Shamu! 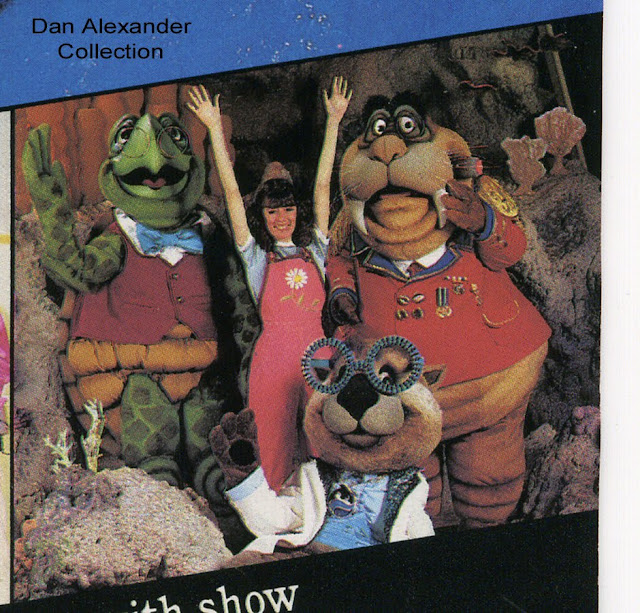 A show that I did see at Sea World in Orlando in 1987 was "Undersea Fantasy."  This indoor, multi-media show featured actors, puppets and animatronics with film footage.  The costumes of Sir Winston Walrus, O.P. Otter and Arthur C. Turtle had moving mouths.  They sang all sorts of songs, including one about coral, and a song called "Do the Swim." 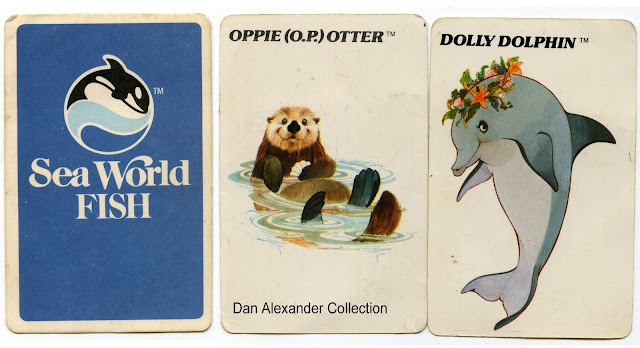 Sea World Fish was a version of the card game "Go Fish."  I don't have this game, but somehow I managed to get a few of the cards.

It's PVSea World!  PVC figures of Shamu and his crew debuted in 1988.  The figures of Shamu, Dolly Dolphin and Penny Penguin were also released as part of a regional McDonald's Happy Meal promotion for Sea World Ohio (the Ohio park was later sold to Six Flags and re-themed). 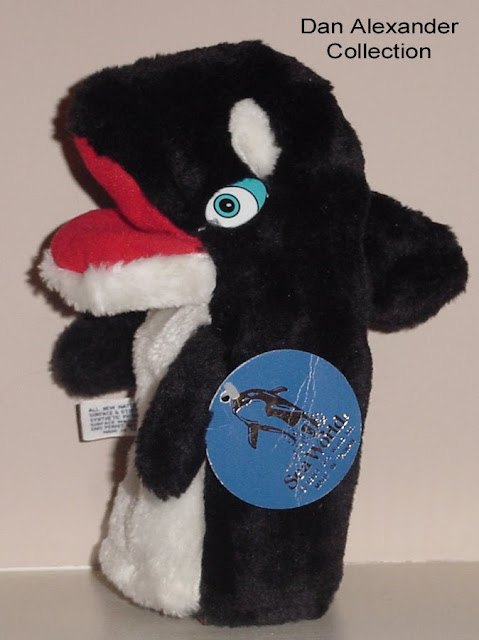 This Shamu puppet I got on my one and only visit to Sea World in 1987 (we got a multi-day pass on this trip, so I think I was at the park for 3 or 4 days on that visit, due to my fascination with marine life) still has his tag!  The puppets were $5 each, which was a lot of money then! 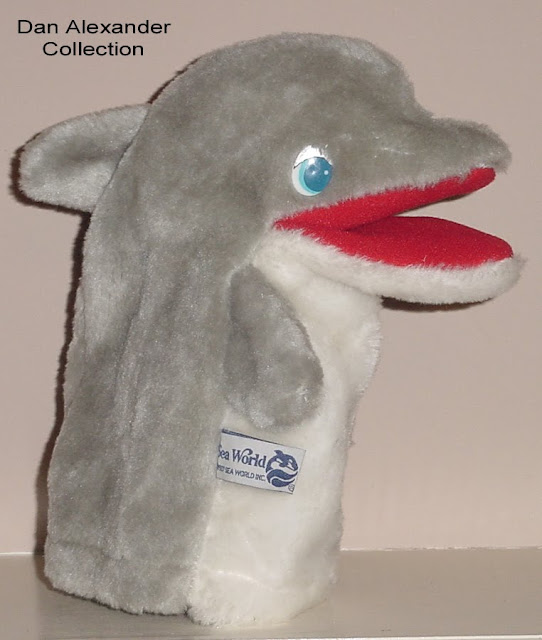 I also got a Dolly Dolphin puppet.  Shamu and Dolly both have squeakers in their mouths, and were made in Taiwan.  On this trip, I also got a woven patch featuring Seamore Sea Lion. 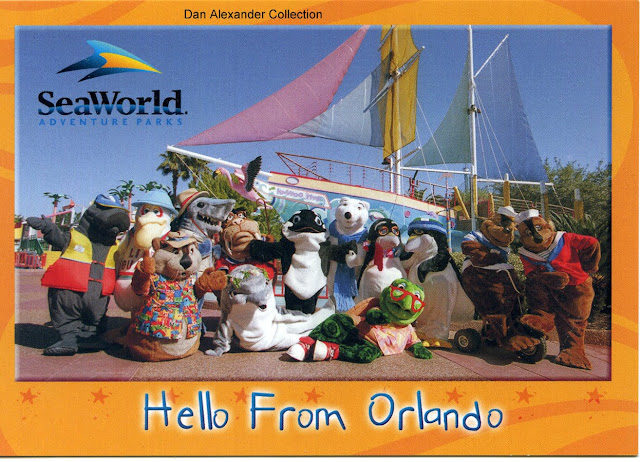 This postcard I got in 2004 features the walk-around Sea World mascots.  New characters have been introduced, including a Manatee (I don't know his name, but this would have been my favorite as a kid), Sydney Shark and Shivers the Polar Bear.  Cap'n Kid and Chester Parrot seem to have been dropped from the cast.  Seamore Sea Lion's brother, Clyde, and Arthur C. Turtle are also seen here.  I have to say, I prefer the old Sea World logo!

These days, Sea World's marine life mascots share their home with the monsters and colorful creatures from Sesame Street.