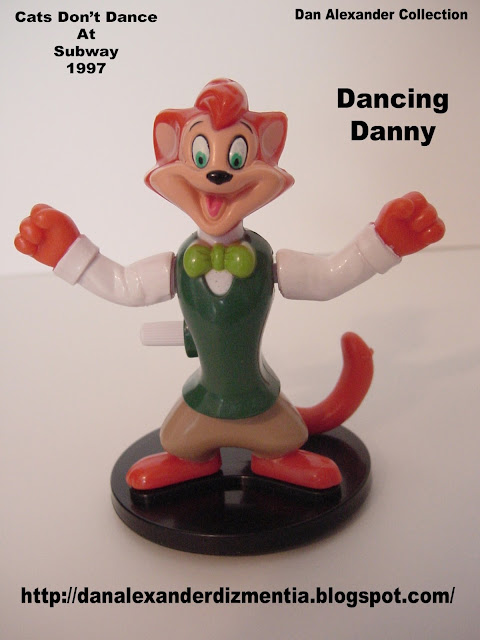 Do you remember that episode of the TV show "Quantum Leap" where Scott Bakula becomes a cartoon cat in Hollywood in the Thirties?  Well, that was a 1997 Turner Feature Animation movie called "Cats Don't Dance."

Optimistic Danny the Cat (voiced by Scott Bakula) travels from Kokomo, Indiana to Hollywood to become a singing and dancing star. 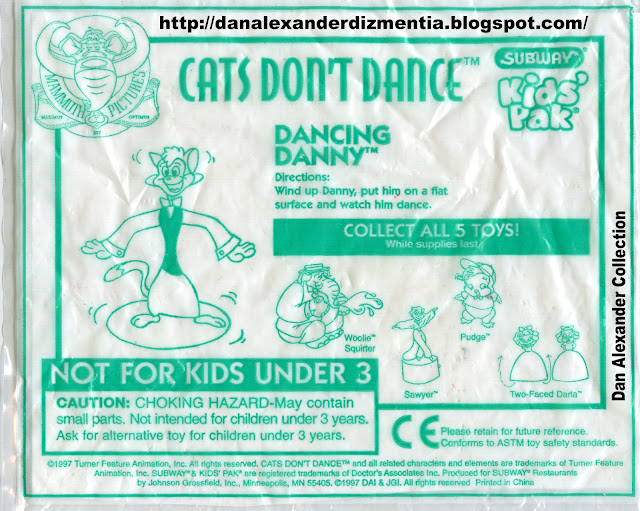 Danny is so skinny.  Instead of Subway, maybe he should eat a Big Mac.

Jasmine Guy (from the TV show "A Different World") provides the speaking voice for Danny's love interest, Sawyer (a former dancer and a secretary for an Animal Talent Agency). 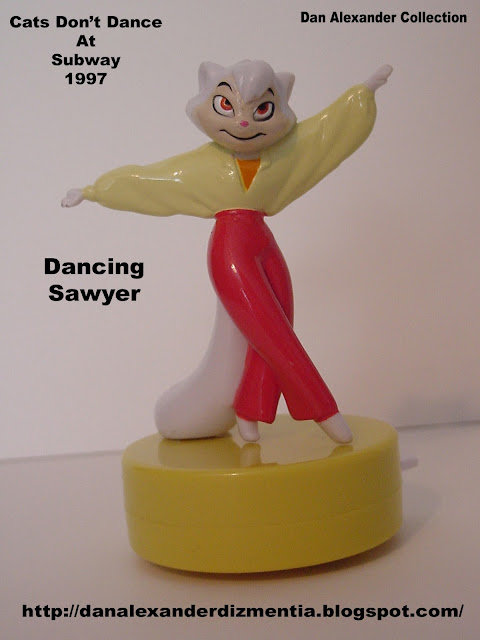 "Cats Don't Dance" fully embraces the romantic idea of Hollywood in a fun way (notice Woolie the Elephant as the mascot for Mammoth Pictures, a clever spoof of the MGM Lion). 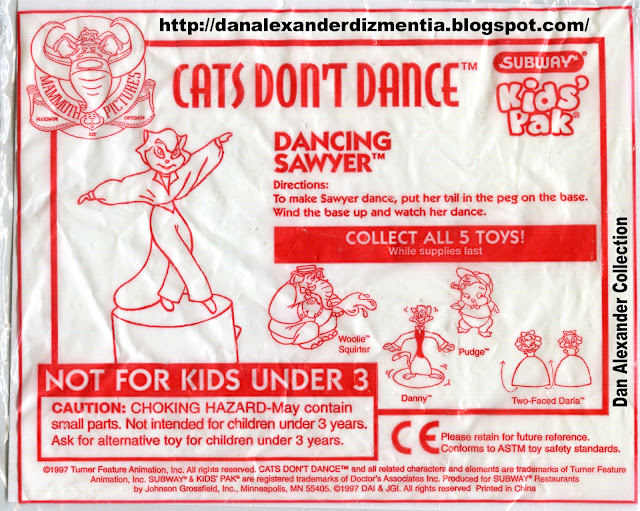 To my knowledge, the only merchandise tied to the film was the set of toys available at Subway Restaurants.

Before the countless Penguin animated films we've seen over the past ten years, there was Pudge the Penguin  (voiced by Matthew Herried). 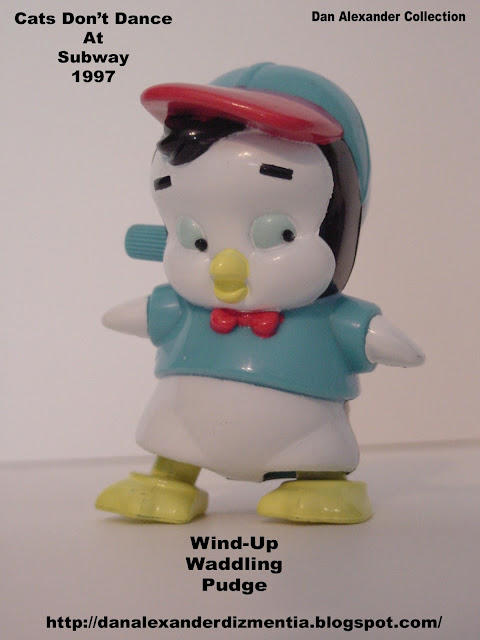 Things are rough for the animal actors in Hollywood until Danny shows up.

I found the "Cats Don't Dance" Subway toys at a Flea Market many years ago.  I think the Woolie the Elephant Squirter (which I never got) may have been the toy sold to kids under the age of three. 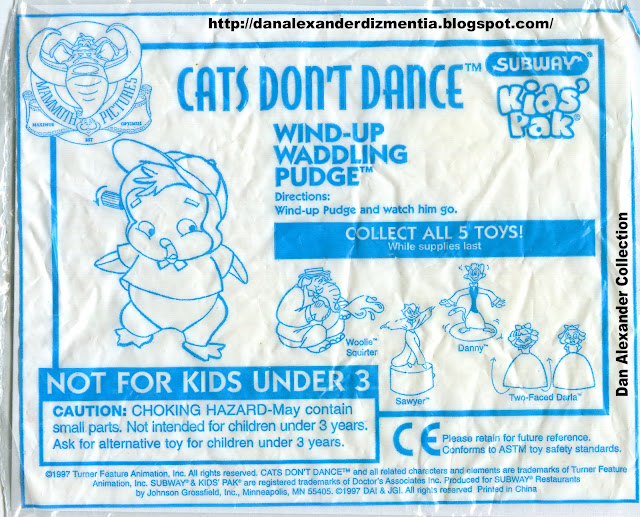 I never saw the Two-Faced Darla Subway toy.  I heard that it was recalled at some point.

Darla Dimple (voiced by Ashley Peldon, with singing by Lindsay Ridgeway) is clearly a parody of Shirley Temple.  Her towering monster servant, Max, was voiced by the film's director, Mark Dindal. 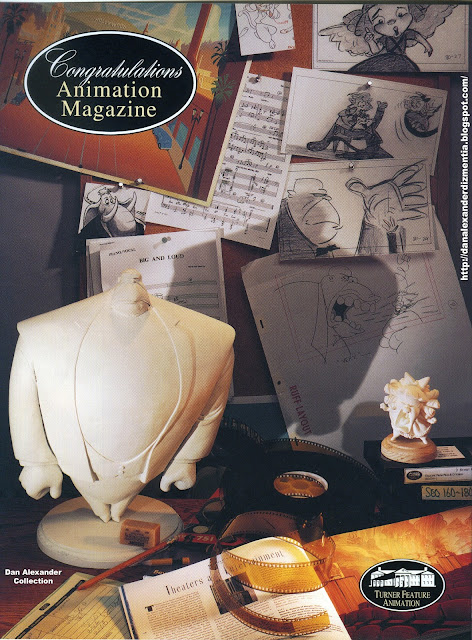 "Cats Don't Dance" was the first and last movie made by Turner Feature Animation.  By the time the film was released, Turner Entertainment merged with Warner Brothers.

When "Cats Don't Dance" debuted in movie theaters in March of 1997, it didn't do very well. 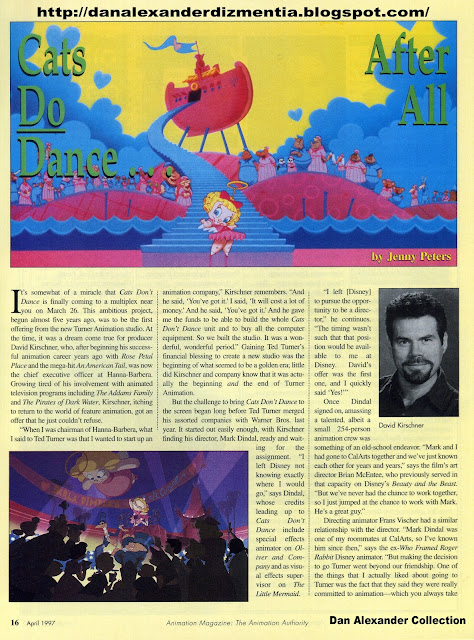 Most people are probably more familiar with this film from showings on the Disney Channel or Cartoon Network.

Re-watching "Cats Don't Dance", I discovered a nice little hidden Easter Egg.  In the "Danny's Arrival Song" sequence, there is a sign on a building with an artist's palette and the name "Nikolai."  This was put in by "Cats Don't Dance" visual artist Dennis Greco as a nod to (Disney) artist Larry Nikolai. 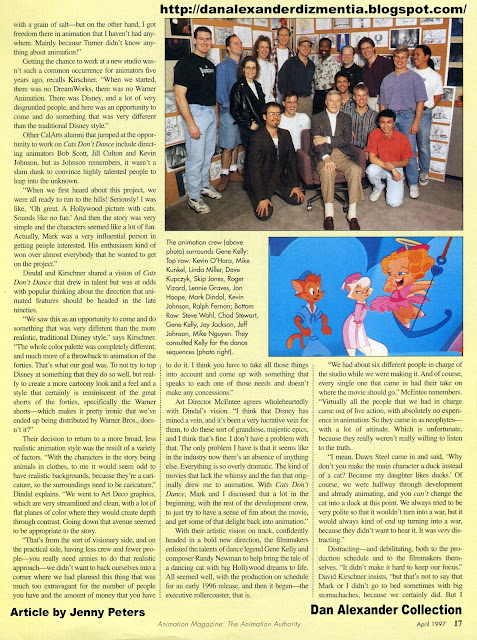 Larry Nikolai has worked in animation and theme park design for many years.  He was nice enough to help me out with a story I did called Monsters, M.I.A.: Six Flags Over Georgia's Monster Mansion And The Big Monster On Campus.

Looking at the model of Woolie the Elephant, it does make me wonder what a CGI "Cats Don't Dance" would look like. 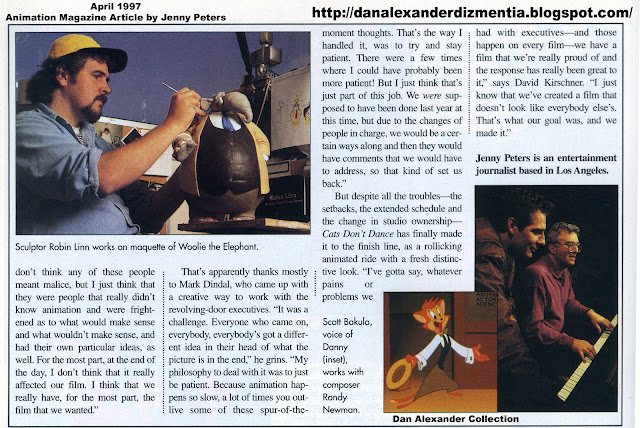 A younger Scott Bakula takes time from his Quantum Leaping to work with a younger Randy Newman.

In the movie, we learn that Scott Bakula can sing, and sing really, really well! 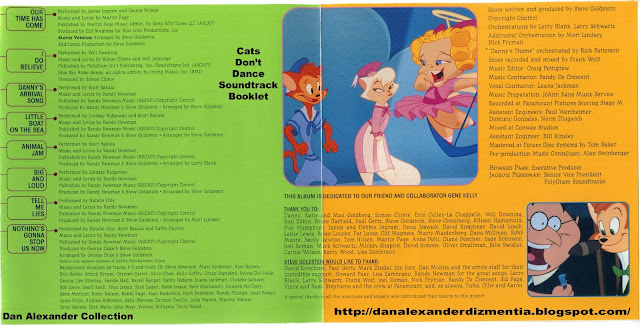 The songs were written by, but not sung by, Pixar favorite, Randy Newman.

The character Danny the Cat seems to have been inspired by Mickey Mouse (at least subliminally). 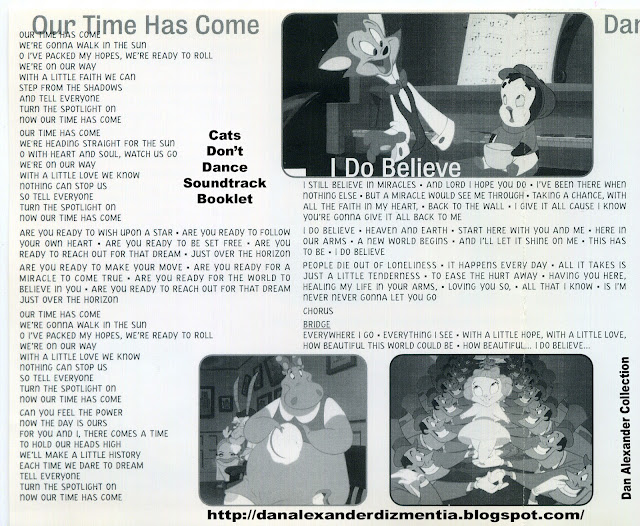 Danny's personality and many of his facial expressions and poses are very Mickey Mouse (in a good way!).

Danny and Sawyer learned to dance with a little help from their mentor, Gene Kelly. 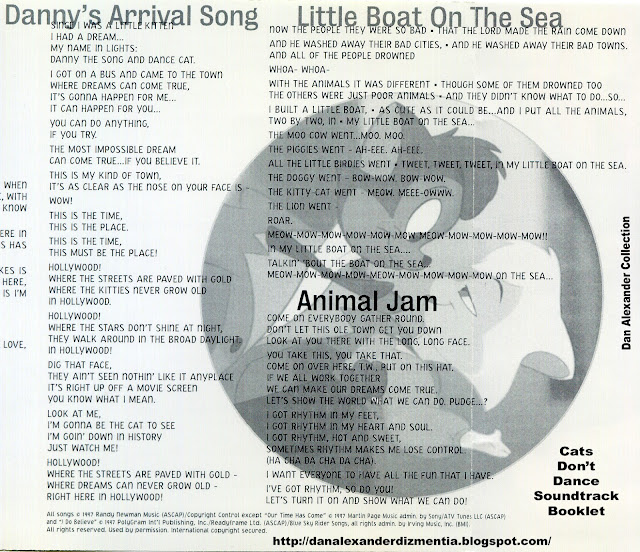 The character animation in the movie is very reminiscent of Disney's Aladdin, too (there's even a "Darladdin" poster in the background during the "Animal Jam" scene).

Look for lots of fun old Hollywood caricatures in the movie, too. 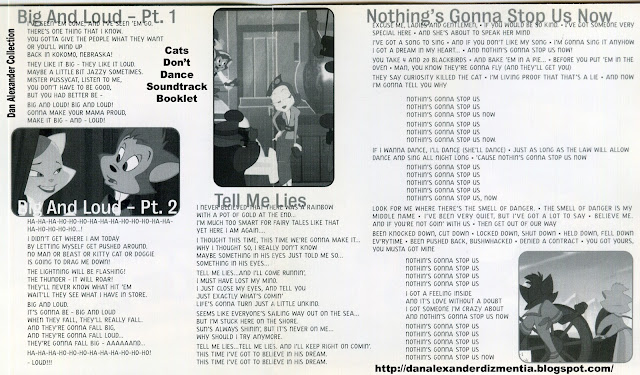 Luckily, Danny and his pals get discovered and are put into lots of movies!  Specifically, at the end we see the characters in posters for Warner Brothers movies like Batman, Superman and Beetlejuice.  It takes us way beyond the 1930s. 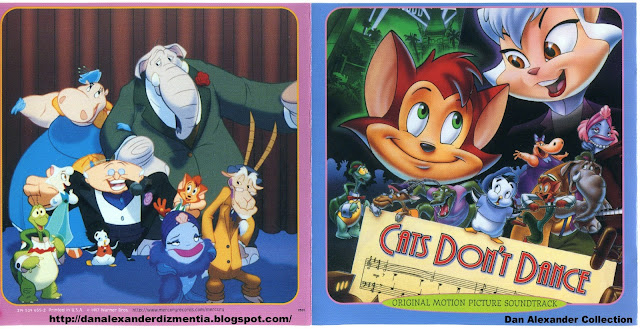 Say, doesn't Frances the fish look a bit like Yzma from Disney's "The Emperor's New Groove"?  Well, there's a reason for that.  Both films were directed by Mark Dindal, and they both have a very similar feel (even similar jazzy soundtracks!).

For more fun, check out Bucky And The Emperor's New Groove At McDonald's.
Posted by Dan Alexander at 10:54 PM 2 comments: