Griffith, Cornelia And Firewall: From Pinball Wizard to Majestic Griffith 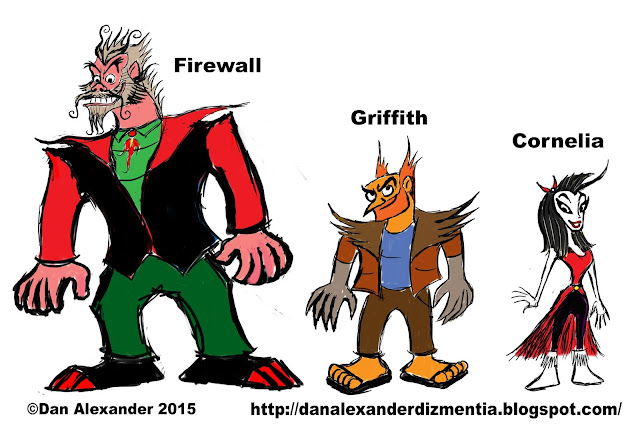 Over the past few weeks, I have been listening to lots of music from the Sixties and Seventies.  A particular favorite of mine is The Who's 1969 song "Pinball Wizard."  I thought, "I'll be clever and make my own Pinball Wizard character."  Then I Googled Pinball Wizard and discovered that had been done already (a lot of times---A LOT).  With that Wizard in mind, I started thinking of other mythical type characters I could make into human characters.  The other logical choices were a griffin, unicorn and a dragon.

I'm not exactly sure what it is that Griffith, Cornelia and Firewall do, but I think that it involves money, and collecting treasure, and being funny.  Details, details...

Griffith (based on a griffin) is the main character here and is kind of a grouch.  I don't know much about mysterious Cornelia (based on a unicorn) except that she sounds like a horse neighing when she giggles.  Bold and brash Firewall (based on a dragon) needs a voice that is intimidating, cool and booming: so Keith David ("Goliath" in Disney's Gargoyles) would be perfect to play him. 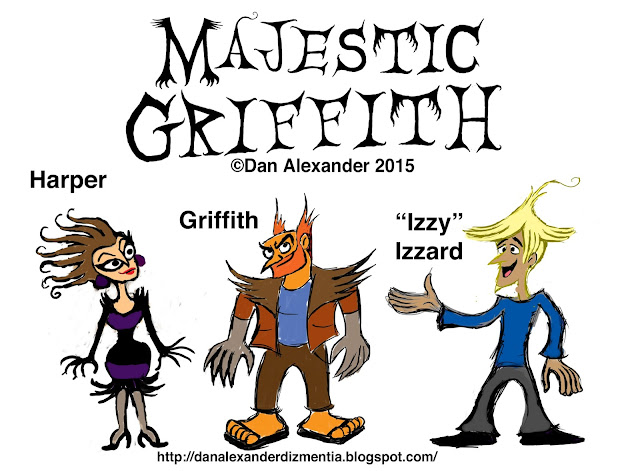 Griffith is a divorced, middle-aged dad who is also an action hero/adventurer security guard.  Griffith's ex-wife is Harper (inspired by a harpie), and I created her with the idea of Annie Potts playing her.  Griffith and Harper have a son named "Izzy" Izzard (voiced in my head by Derek Richardson from Anger Management).  Izzy is based on the "Pinball Wizard" character idea that started all these characters. 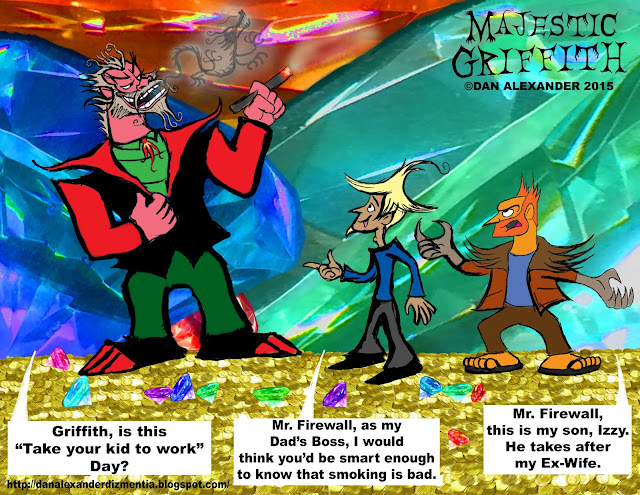 Firewall is the focal point of the world of Majestic Griffith and he is definitely inspired by Benedict Cumberbatch's Smaug from The Hobbit (as well as Disney's Scrooge McDuck).

Writing characters that are flawed and bitter is fun, especially when they are whimsical, too. 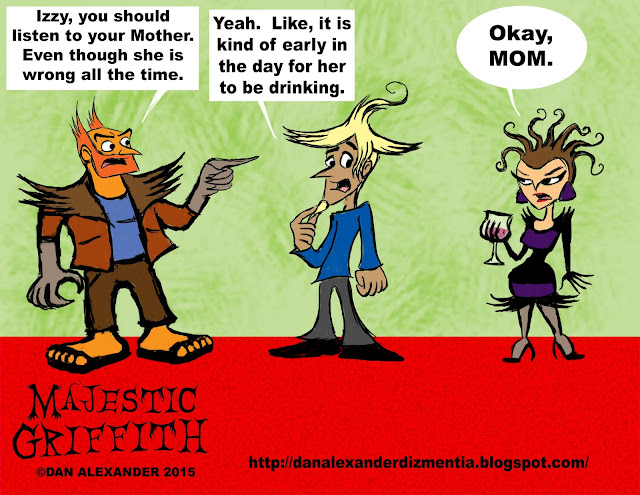 Though they are divorced, I think Griffith and Harper are still in love.  Maybe because they can be brutally honest with each other.

Griffith has a lot of conflict in his life, including a cocky, pelvis-swiveling rival named Gus (a character inspired by a Pegasus and Conrad Birdie from Bye Bye Birdie). 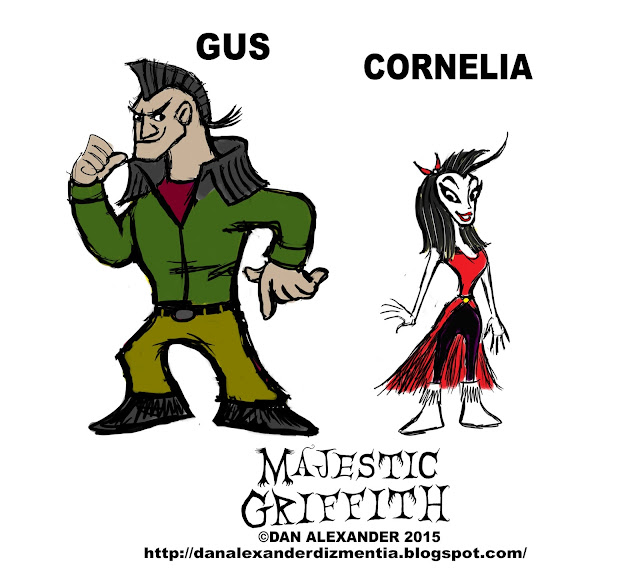 The "innocent" power-hungry Cornelia is his partner in crime.

Mannox is a bullish guy with a personality the size of Texas.  He is based on a Minotaur. 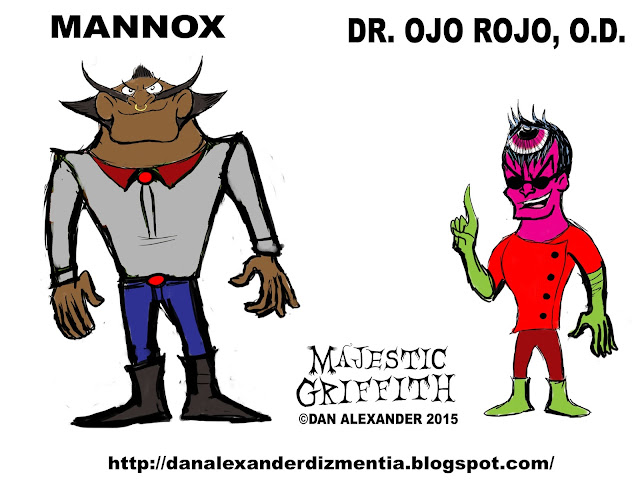 Dr. Ojo Rojo, O.D. is a diabolical eye doctor based on a Cyclops (additional inspiration came from a sun-burned bald spot I got a couple years ago).

Nestor McLoch is boxer (based on the Loch Ness Monster). 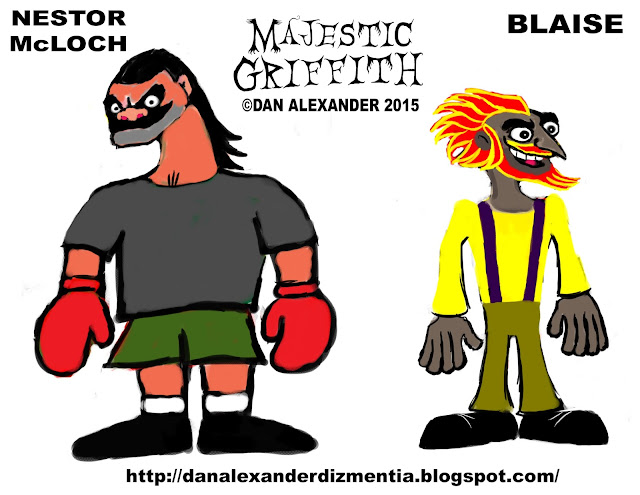 Blaise is a pyromaniac firefighter, based on a Phoenix.  Before settling on the name "Blaise", the character was also known as Pyro Byrd, Fireman Byrd, and Ashton Phynixx.

Uncontrollable Underbridge is based on a Troll.  In my mind, Underbridge is voiced by Ty Burrell (from Modern Family).  This character went through many, many different design ideas and was originally going to be "Comptroller Underbridge."  I was worried that nobody would know what a Comptroller was (I'm not even sure what it is, really). 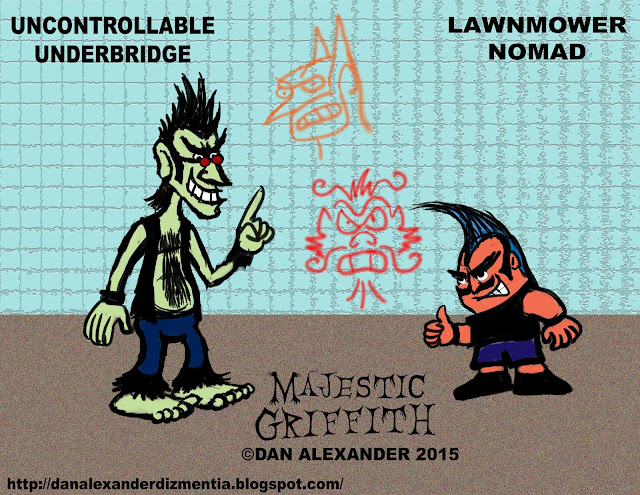 Lawnmower Nomad is based on a Gnome.  A Lawn Gnome (get it?!).  These hooligans are always up to no good.

Top Secret Agent Proto (Triceratops/Protoceratops), Tyrell (T-Rex) and Dax (Pterodactyl) are "plot twist villains" based on dinosaurs.  Tyrell also happens to be based on someone I know who used to work for a country club golf course. 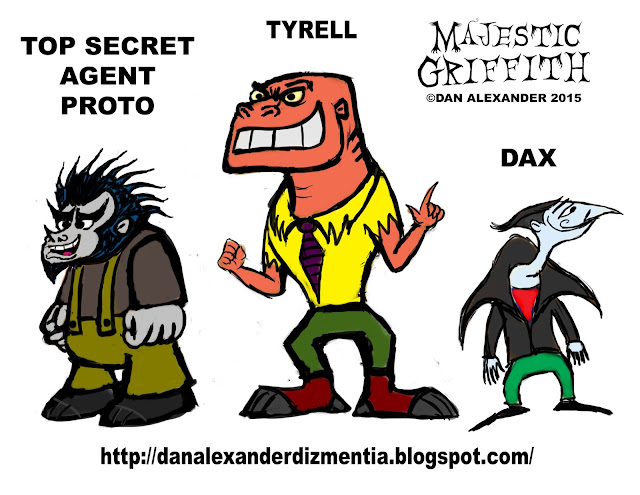 It may seem totally random to have dinosaur-based characters in Majestic Griffith, but it is not.  Dinosaurs can be seen as the inspiration for stories of dragons and griffins.  Bones of the beaked Protoceratops, for example, fueled the tales of the mythical Griffin.

Posted by Dan Alexander at 5:48 PM No comments:

Groovy Beauty And The Funky Beast 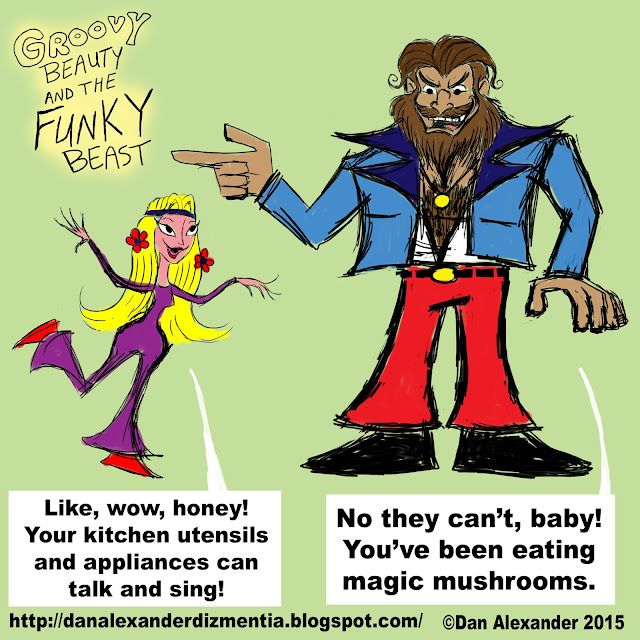 Beauty and the Beast is a tale as old as time and one that has been told in many different ways over the years.  Yesterday I quickly drew up an idea I had for a more "adult" animated 1960s/1970s spin on the story called Groovy Beauty and the Funky Beast.  I was very much inspired by many of the truly bizarre, forgotten, and unknown (to today's audiences) cartoons created by Hanna Barbera, Ruby Spears and Filmation circa the 70s and early 80s (there was a Hanna Barbera TV show called The Funky Phantom, no joke!).  The Funky Beast is not a literal Beast---he is a hairy 70s "bad boy" who likes to get down on the dance floor.  Groovy Beauty is a free-spirited 60s flower child.

I am thinking about what the soundtrack to Groovy Beauty and the Funky Beast would include.  1)"Hair" should probably be one of the songs.  2)"Bend Me, Shape Me" by The American Breed---the Beauty's ability to change the Beast is part of the appeal to the story, because girls want to "change" a bad boy. 3)"I'm Your Boogie Man" by KC and the Sunshine Band---for obvious reasons.

4) I love the song "Pinball Wizard" by The Who.  It has nothing to do with the story of Beauty and the Beast, but I think it is a cool song.  Maybe the Pinball Wizard puts the curse on the Funky Beast.
Posted by Dan Alexander at 9:31 AM 2 comments: