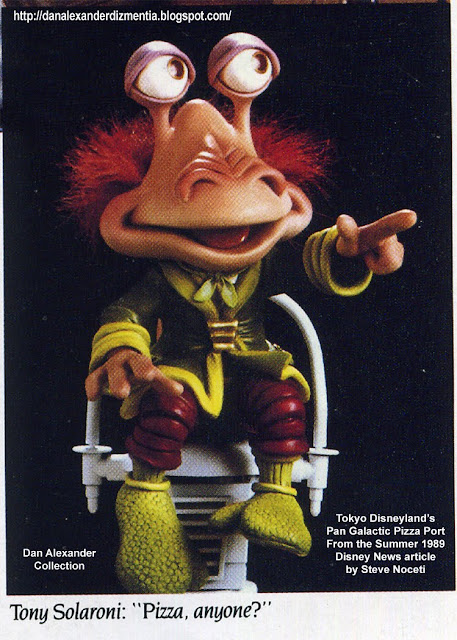 What do you get when you mix the alien puppets from Star Wars with the alien Muppets from Sesame Street? You get Pan Galactic Pizza Port, a restaurant show found at Tokyo Disneyland and nowhere else on Earth.

Oriental Land Company, the owners of Tokyo Disneyland in Japan, wanted a new restaurant to open with the Star Wars themed Star Tours attraction in Tomorrowland back in 1989. Artist Steve Kirk had created some alien characters that were looking for a theme park gig. Show writer Kevin Rafferty got cooking with a concept, and the Disney Imagineers dished out Pan Galactic Pizza Port. Yoshi Akiyama, Tokyo Disneyland's Director of Design, and the Tokyo Disneyland executives thought the pitch was out of this world. 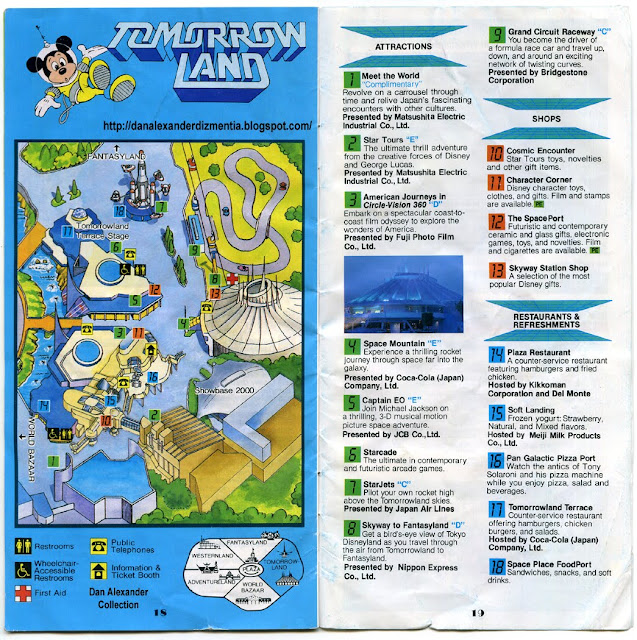 As I mentioned in A Tokyo Disneyland Guide To Fun (Circa 1990), I have not yet been to Japan to experience Pan Galactic Pizza Port for myself. This intergalactic pizza parlor is run by an Audio Animatronic alien named Tony Solaroni. 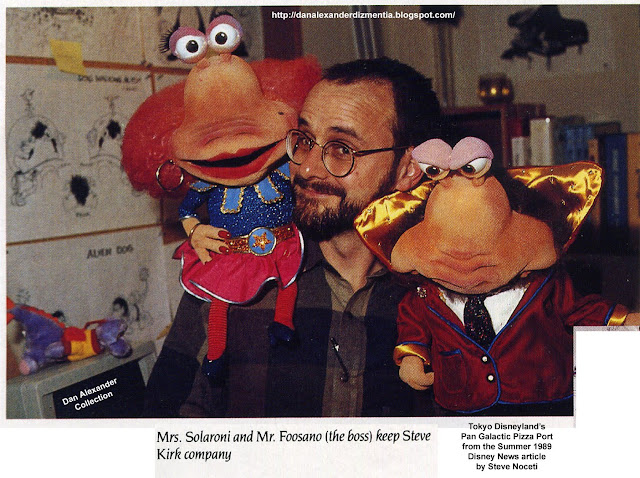 Diners are entertained by video monitors featuring the behind-the-scenes antics of the pizza-making aliens. The alien characters were developed by Tim Kirk and Rennie Rau, and the puppet fabrication was handled by Lynette Johnson.

Mona Koth enjoys a break from producing and directing video segments for Pan Galactic Pizza Port with some of her friends. 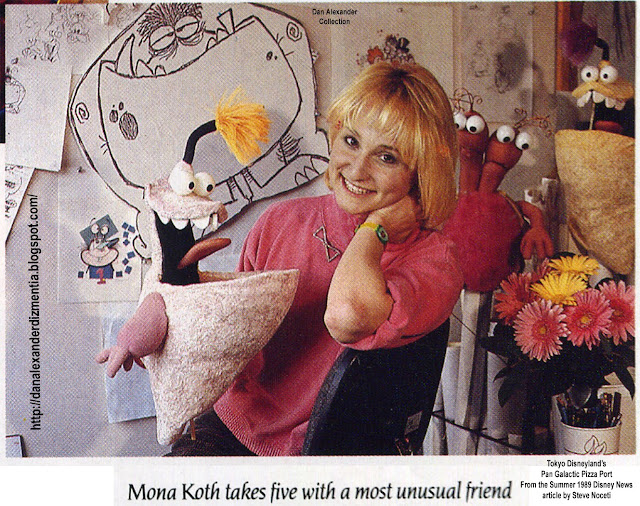 Not shown here is another segment producer, Ellen Lichtwardt, who was probably having to deal with a diva alien puppet in a pizza delivery scene shoot.


The alien characters in the videos appear as puppets and animation. Here is a great illustration of Mrs. Solaroni. 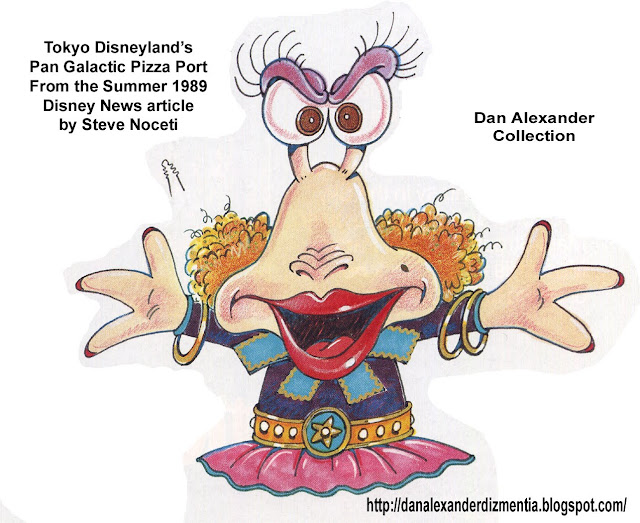 Here we see an illustration of the boss man of Pan Galactic Pizza Port, Mr. Foosano. 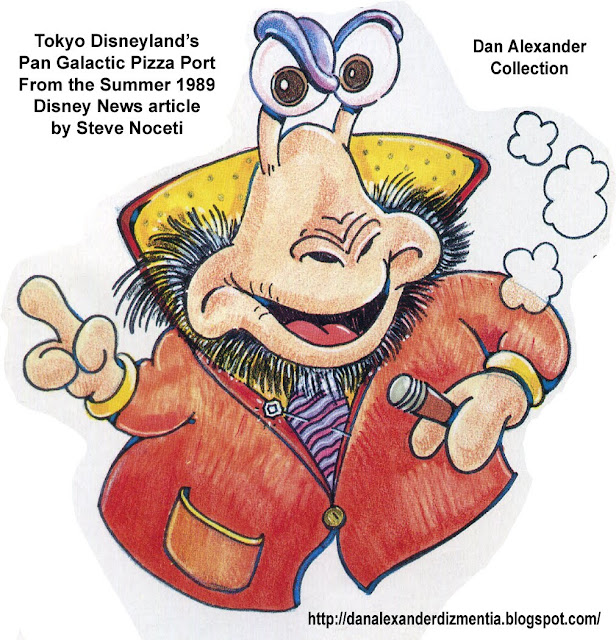 When Disney later announced "Plectu's Fantastic Galactic Revue" for Walt Disney World (which was never built) as part of "The Disney Decade" attraction additions in 1990, I instantly thought of these great characters.

The P6 Delivery Saucer is ready for service thanks to Ron Harris, Lynette Johnson and a key grip. 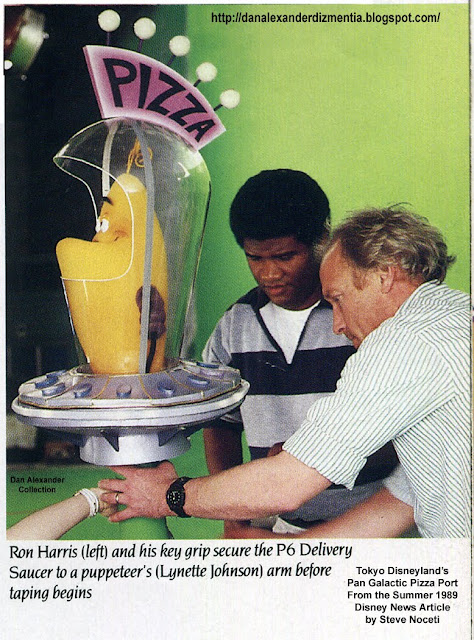 Pan Galactic Pizza Port delivers anywhere in the galaxy. Tipping is appreciated, and a gratuity is automatically added to deliveries outside our solar system.

For putting together a restaurant attraction in record-time, Disney Imagineer Kevin Rafferty is ready for a well-deserved pizza party, catered by Pan Galactic Pizza Port. 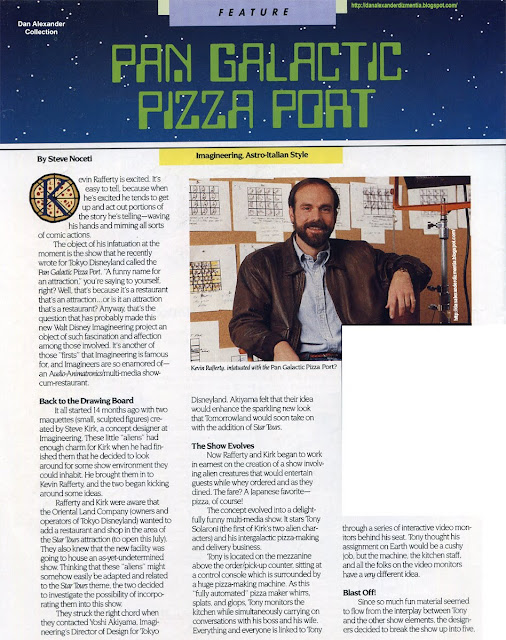 Tony Solaroni also has some human employees in the kitchen, too! 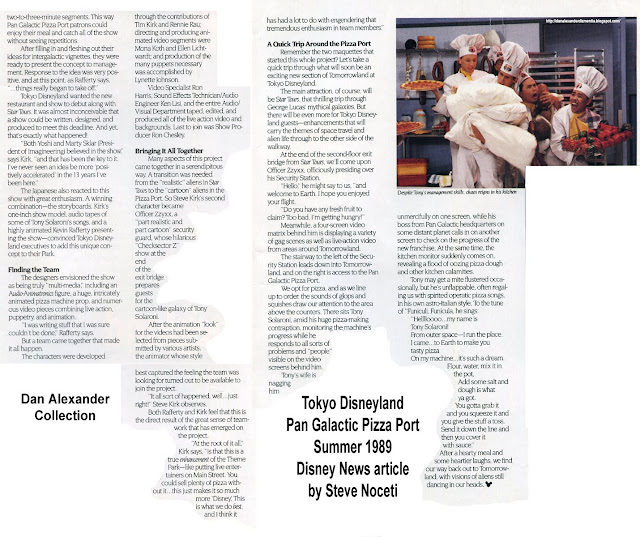 To serve as a transition between the aliens of Star Tours and the cartoonish aliens of the Pan Galactic Pizza Port, a security guard character named Officer Zzyxx was stationed at the exit of Star Tours leading to the pizzeria.

Disney Imagineer Valerie Edwards touches up a model of Officer Zzyxx, a character that remained a mystery to me until I finally saw this picture of him in the Spring 1993 issue of Disney News magazine (in an article called "Crafting a Cast of Characters" by Jean Lee). 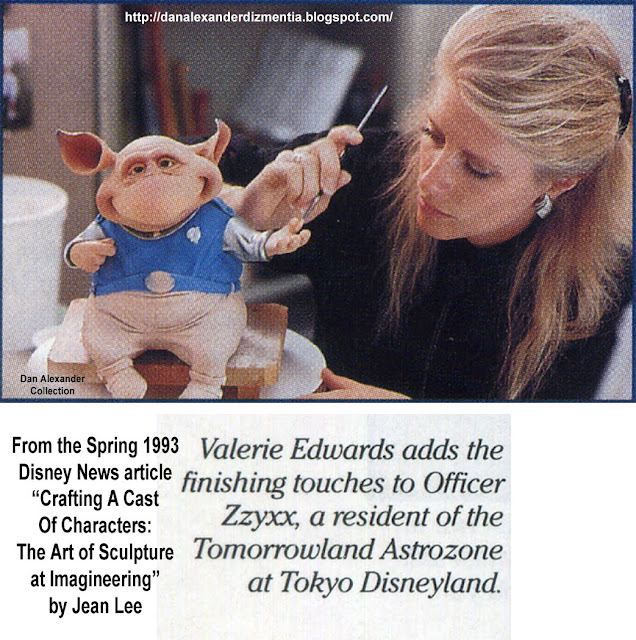 Pan Galactic Pizza Port has not yet been duplicated at any other Disney Park. However, Officer Zzyxx does appear at Tomorrowland in Walt Disney World. In Florida, he's known as "lounge lizard" Sonny Eclipse, an Audio Animatronic alien singer at Cosmic Ray's Starlight Cafe at the Magic Kingdom.

For more about Tokyo Disneyland, be sure to visit Meet The World, a great website created by my friend TokyoMagic!

For another Disney theme park alien adventure, check out Alien Encounter at Walt Disney World.
Posted by Dan Alexander at 10:16 AM