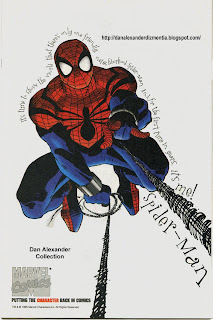 This Summer, I'll be visiting Walt Disney World in Florida. I'll be staying on Disney property, and like many people these days, I'll also be visiting Universal's Islands of Adventure. I'd love to see Walt Disney World offer the "Spider-Man Shuttle," a service for Disney Resort guests who could take the Spider-Man themed "Spider-Van" to visit Marvel Super Hero Island and the new Wizarding World of Harry Potter at Universal's Islands of Adventure in Orlando. Disney could sell Spider-Man themed Universal ticket packages and even include special perks.

With Universal's recent announcement of upgrades to its fantastic "Amazing Adventures of Spider-Man" attraction, it's pretty clear that Islands of Adventure does not intend on dropping Marvel (a brand Disney recently acquired) from its Florida resort any time soon. Since Marvel has an existing, strong alliance with Universal, this could be a creative way to give Spider-Man and the Marvel characters a stronger presence at Walt Disney World. 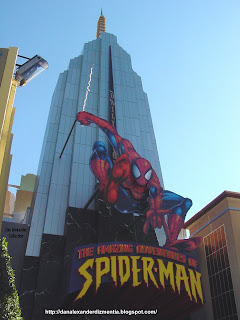 If people are going to visit the very popular Wizarding World of Harry Potter anyway, it seems like the Mouse would want to get in on that action, with the help of Spider-Man and the Spider-Van. Disney's ABC Family already airs Harry Potter film marathons, so there's also that existing connection.

I visited Universal's Islands of Adventure for the first time in 2009, and had a blast. My favorite souvenir from this trip is a pressed penny of Spider-Man. 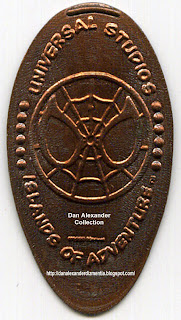 Of all the attractions at Universal Orlando, I thought the Amazing Adventures of Spider-Man was the best. I can't wait to finally experience the Wizarding World of Harry Potter.


Years before Universal's Islands of Adventure attractions were a twinkle in an ex-Disney Imagineer's eye, Spider-Man and the Hulk could be found with Universal characters like Frankenstein and Woody Woodpecker. The exciting new Flipits were available to order from comic books in 1979. 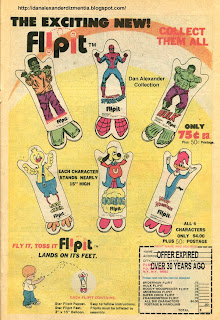 It looks like Flipit "puppets" (their word) were pieces of cardboard with a balloon stuck to them. You could also get a Flipit of Super Chick, a character I only know from this advertisement.


There was no Amazing Adventures of Spider-Man attraction to dazzle folks back in 1982, but there was the Atari Spider-Man video game from Parker Brothers. Here, the game's graphics are drawn in comic book form, and the images are priceless. 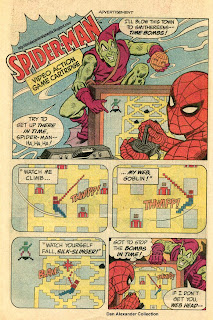 This ad is from a 1982 Smurfs comic book from Marvel. 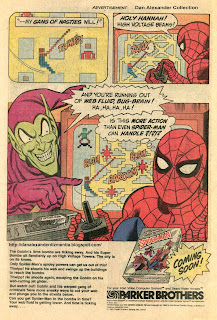 
In 1995, McDonald's and the Fox Kid's Network (home to the Spider-Man animated series) teamed up for a contest for arcade games based on Spider-Man, X-Men and Captain America. 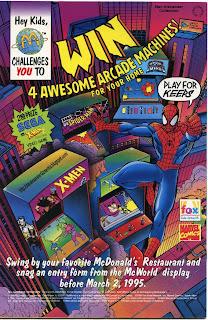 Second prize was a SEGA X-Men game. Not too shabby!


Spider-Man Cereal, with its nutritious crispy rice spider webs and marshmallow cameras, was launched in 1995 by Ralston. 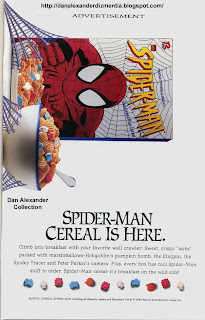 Why didn't someone think of a spider web rice cereal 40 years ago? General Mills could have had Charlotte's Web cereal, with marshmallow spiders.


In the late 1970s and early 1980s, Spider-Man and his friends appeared in comic book ads for Hostess Snack Cakes.

Spider-Man was featured in a very funny comic with June Jitsu for Hostess Twinkies. 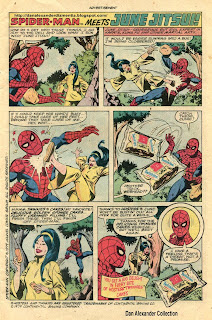 Revenge is a dish best served cold. June Jitsu could not stop eating the Twinkies that Spider-Man gave her, and she got so out of shape that she could no longer use her Kung Fu for evil.


The Hulk takes on the Roller Disco Devils in a Hostess Fruit Pie ad from 1980. 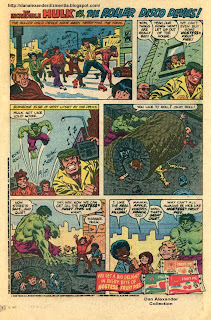 
Are you Thor? Yes, it hurts. My sides hurt after reading this 1978 ad for Hostess Fruit Pies. 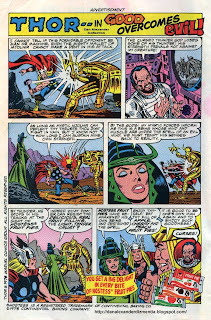 Best melodramatic lines ever: "By Thunder, he stops in his tracks at the sight of Hostess Fruit Pies." "Hostess Fruit Pies have re-awakened his own being and destroyed the spell." "Enjoy Thy-self! Eat thy fill of Apple, Cherry and Peach Fruit Pies!"


Daredevil and Johnny Clymbe are featured in this 1977 ad. I don't know much about Daredevil. Was Johnny Clymbe an established character, or was he created for this ad, and named Clymbe because he climbed to the top of a building for Hostess Fruit Pies? 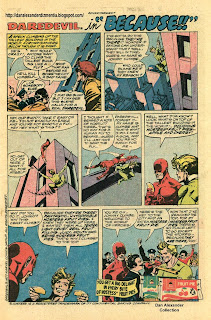 "Now that I've reached the top, for my Hostess Fruit Pies there's no place left to go except the stores...because they are there, too!" Clymbe, there's nowhere to go but down now.


By 1995, Spider-Man was the spokesman for Drakes Cakes. 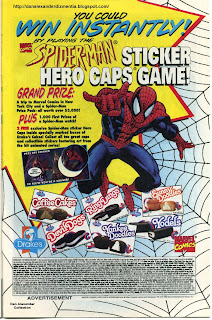 I grew up in the South, and had never heard of Drakes Cakes (we had Little Debbie Snack cakes).


This 1980 ad from an Avengers comic book features Spider-Man action figures and The Empire Strikes Back, in comic book form. 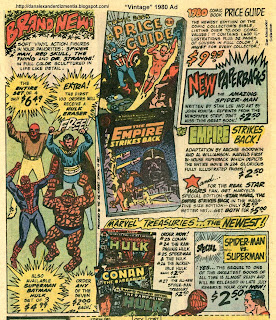 There's also a grudge match between Spider-Man and Superman. I wonder who won? 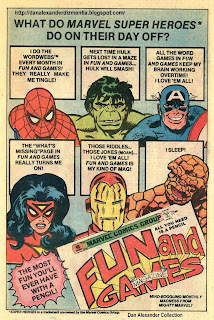 I'll have what they're having.


Disney and Marvel have worked together before. In 1995, Marvel produced comic books for Disney. Some of the titles included Beauty and the Beast, Aladdin and the Little Mermaid.

You could also find The Disney Afternoon and Gargoyles Marvel comic books. The Spider-Man ads that I've posted from the 1990s are from some of these Disney comics.


Disney, Marvel and the Muppets could team up for a reboot of the 1980s official Marvel spoof, Spider-Ham! 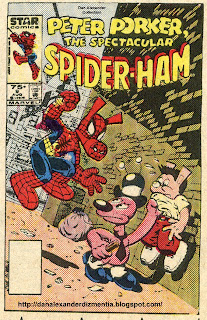 I think Miss Piggy could be the love interest in a new Spider-Ham series.


I can't wait for my trip to Orlando---I'm sure there will be a trip report here!
Posted by Dan Alexander at 5:07 PM