Filmation's Ghostbusters (AKA The Version With The Gorilla) 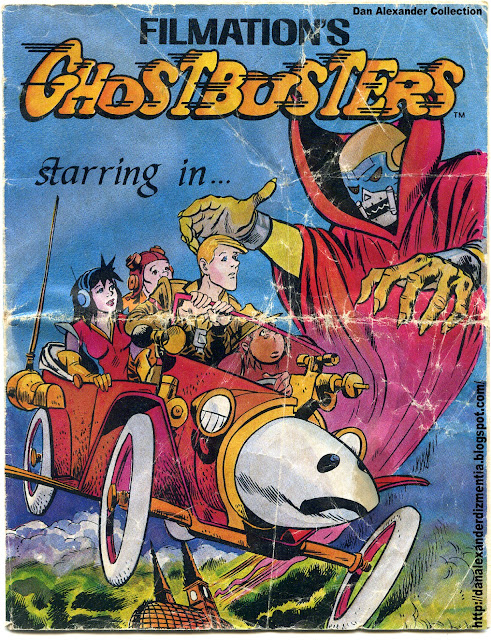 Everyone is familiar with the Ghostbusters.  You know, the cartoon with the Gorilla that wears pants.  Say what?!

Filmation's 1986 animated Ghostbusters TV series was the cause of confusion and frustration for many children in the 1980s.  It was actually NOT a rip-off of the 1984 Bill Murray film with Slimer and the Stay Puft Marshmallow Man.  Filmation created a live action Ghost Busters show way back in 1975 (and yes, it had a gorilla character, too!). 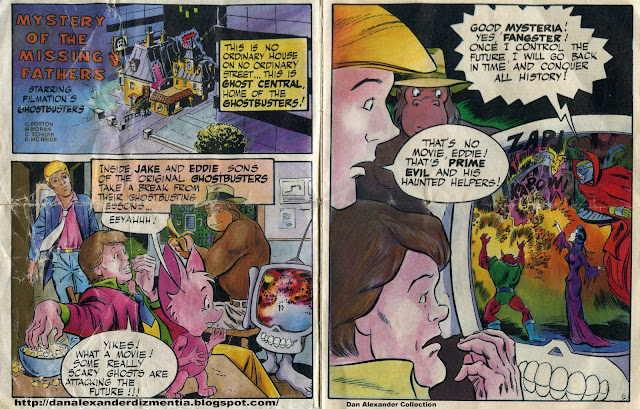 The 1986 Filmation Ghostbusters cartoon focused on the sons of the original Ghost Busters. 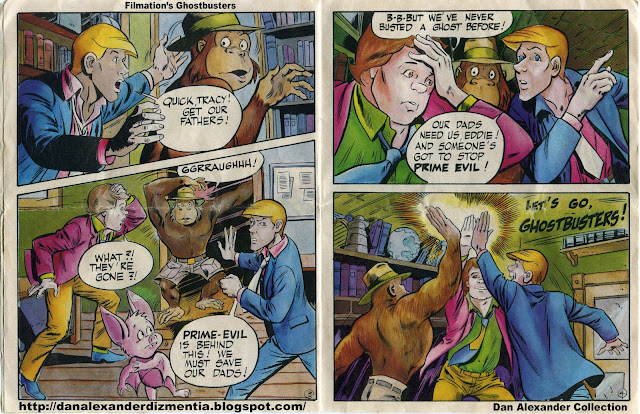 The Ghostbusters voice cast included some legendary cartoon actors.  Jake Kong Jr. was voiced by Pat Fraley (Disney's "TaleSpin").  Eddie Spencer Jr. was voiced by Peter Cullen (Optimus Prime in "Transformers").  Tracy the Gorilla was voiced by Filmation producer Lou Scheimer.  Belfry the Bat was voiced by Susan Blu (she's provided character voices and been a voice director on many, many cartoons).

The Ghostbusters have their own flying machine called the Ghost Buggy.  It is sort of like a haunted version of Chitty Chitty Bang Bang. 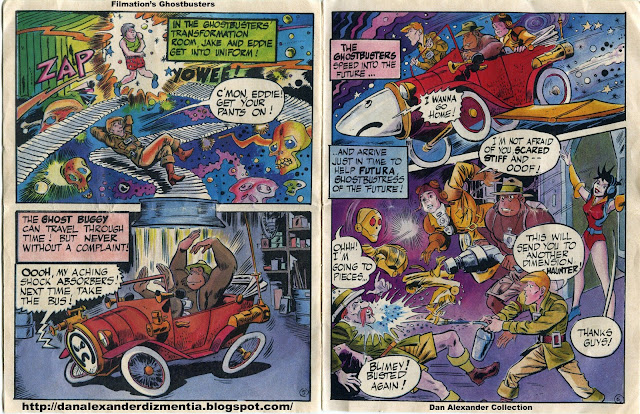 The Ghostbusters are assisted by Futura, the Ghostbustress of the Future (Susan Blu).  The have to fight off ghouls like Scared Stiff (Pat Fraley) and Haunter (Peter Cullen).

The main villain the Ghostbusters have to fight is Prime Evil (Alan Oppenheimer).  He fits in well with other Filmation villains like Skeletor. 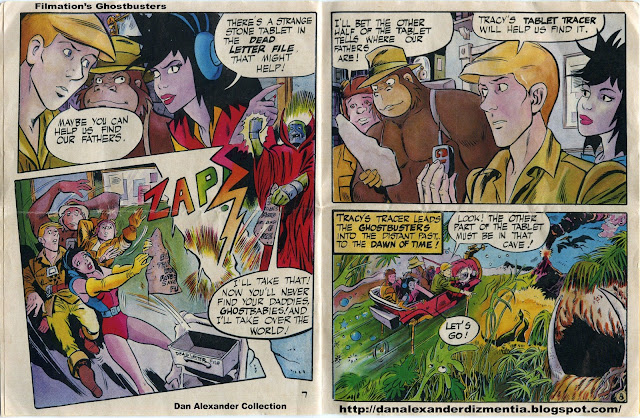 This comic book was packaged with action figures based off the show.  I actually noticed the toys before I knew about the cartoon. 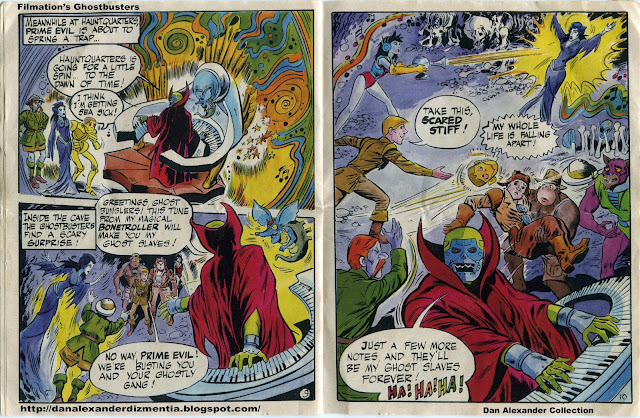 I like how theatrical and dramatic Prime Evil acts. 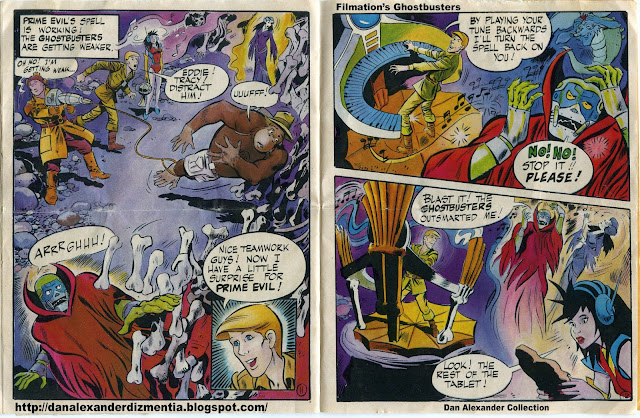 Prime Evil is foiled again!  He would have gotten away with it if it had not been for those meddling kids and their Gorilla.

The Ghostbusters and their enemies have all sorts of gadgets, houses and accessories to translate into toys. 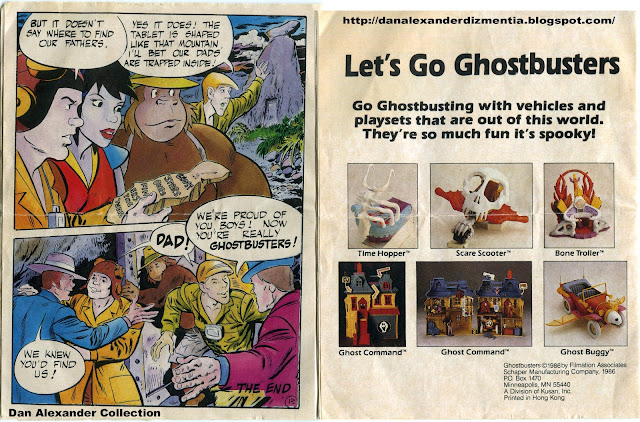 Oooh!  Look at the Ghost Command Haunted House and the Ghost Buggy!  I never had these.  I bet they are worth a lot now.

Check out the Tracy the Gorilla figure with his Feces Flinging Action Arm! 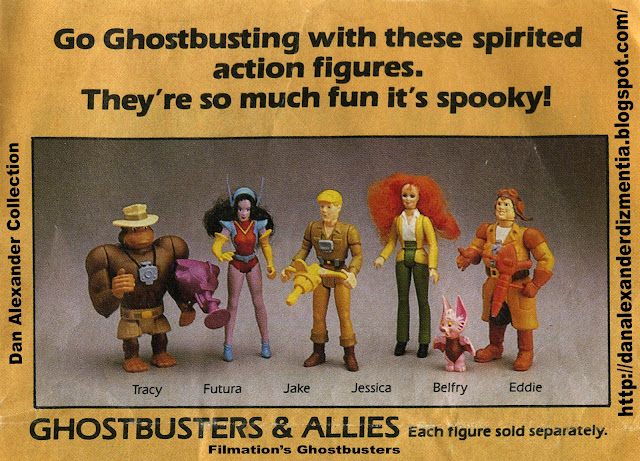 This is a nice gender-neutral set of toys, with flowing hair on Futura , as well as TV reporter Jessica Wray (Susan Blu) and villain Mysteria.

Prime Evil and his pals want to haunt your house. 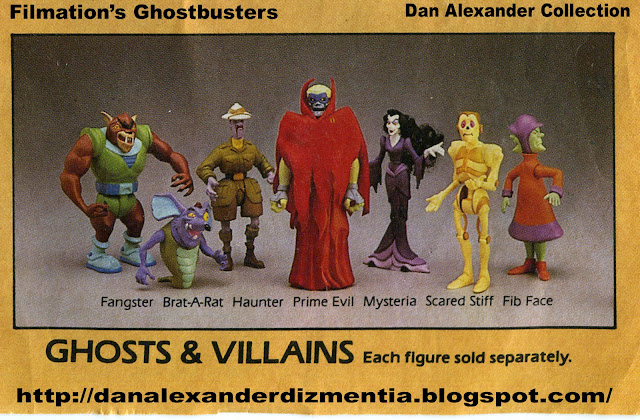 Brat-A-Rat was sold with Belfry, which were the only two Ghostbusters action figures that I had.

Belfry (and the Ghostbusters comic book) has survived in my Halloween decorations for decades.  I lost Brat-A-Rat many years ago. 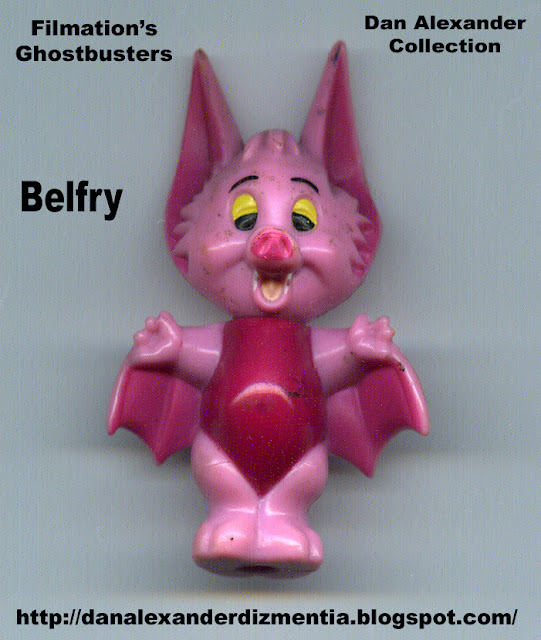 Belfry wrapped up each episode of Ghostbusters, similar to Loo-Kee's role on Filmation's "She-Ra."

"She-Ra" featured a villain sidekick character named Imp who looks a bit similar to Belfry.  Visit Loo-Kee Here! It's She-Ra and He-Man! to explore the world of the Masters of the Universe.

For more fun with Gorillas and Ghostbusters, check out King Kong, Christmas Ape.
Posted by Dan Alexander at 10:41 AM