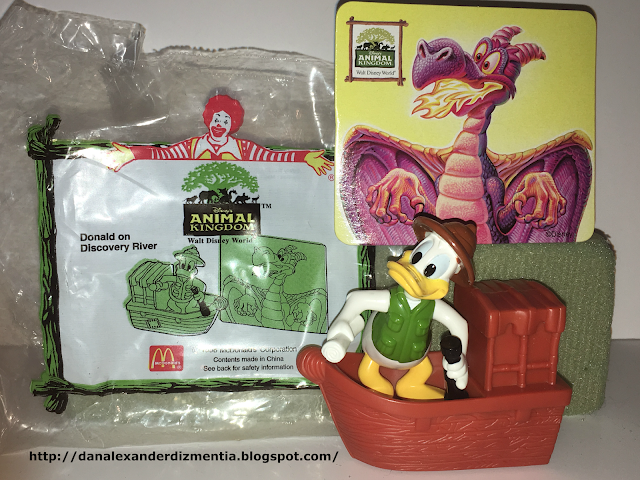 Disney's Animal Kingdom at Walt Disney World in Florida is about to celebrate its 20th Birthday.  The park opened in April 1998, and in addition to being an Animal Kingdom sponsor, McDonald's released Happy Meal toys promoting the new attraction in the United States and International markets.  In Asia, the McDonald's promotion featured Disney character toys with an accessory and a backdrop.  It is interesting to go back and see how much has changed in twenty years.

Donald Duck is set for adventure on the Discovery River Boats.  It looks like he's spotted a Dragon!  This toy set is interesting, because it represents the earliest casualties of Disney's Animal Kingdom.  The Discovery River Boats only operated for a few years.  The boats floated past a cave containing an unseen dragon, who was supposed to be the star of an upcoming land, Beastly Kingdom.  The Mythical animals section was planned from the start, but legend has it that Universal's Islands Of Adventure park's opening in 1999 killed the Animal Kingdom concept of a dragon coaster.  Ironically, Universal's Dueling Dragons coaster was recently shut down and will be replaced by a new Harry Potter attraction.  Disney's Animal Kingdom finally got its own mythical creature land, full of dragon-like banshees, when Pandora: The World of Avatar opened in 2017.  Pandora sits where the dragon themed land was supposed to go.

Dinoland USA was formerly sponsored by McDonald's.  Here we can see Goofy making friends with a dinosaur.  At the time, Dinoland's main attraction was called "Countdown to Extinction."  But it was renamed "Dinosaur" to promote the 2000 Disney movie of the same name.  The park opened the county fair type Dino-Rama expansion in 2001. 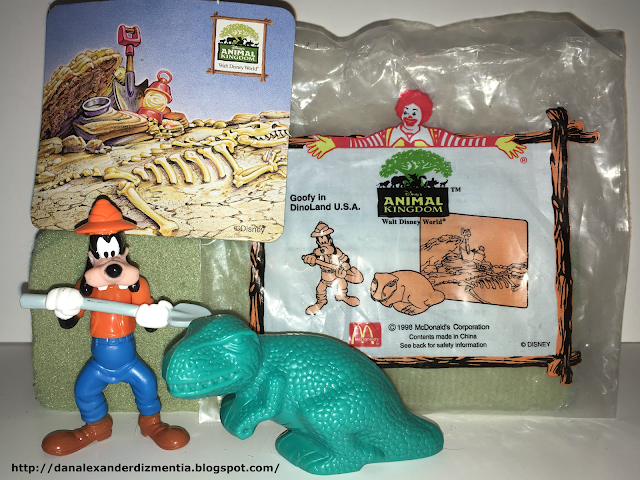 For 2018, Dinoland will get some new entertainment hosted by Donald Duck.  "Donald's Dino-Bash" celebrates the relationship of birds and dinosaurs.

Minnie Mouse makes a new friend in Gorilla Falls Exploration Trails.  Gorilla Falls is another Animal Kingdom attraction that had a big change early on. 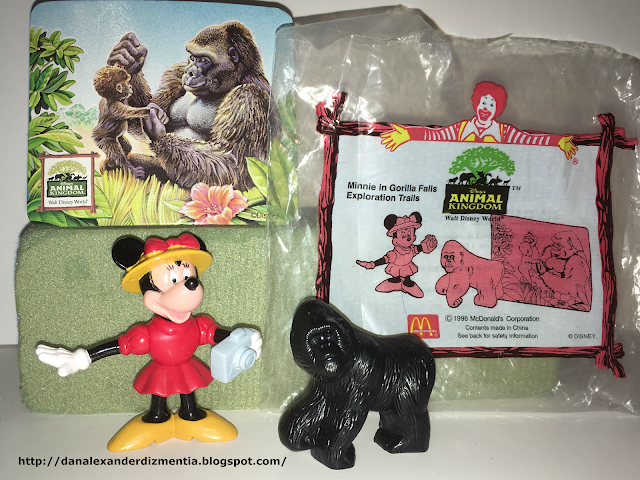 Gorilla Falls had a name change to "Pangani Forest Exploration Trails" not long after opening.  The Gorillas were not always guaranteed to be seen, so a new name was given to the trails.  The name returned in 2016.

Kilimanjaro Safaris is Animal Kingdom's headliner attraction.  Here, Mickey takes a trip on a Jeep to see some elephants.  The Safari has changed a great deal over the years.  Initially, the ride had a plot about poachers killing an Elephant, and riders had to help save her animatronic baby.  The entire poacher story was (thankfully) eventually dropped.  New animal species have been rotated over the years, with some of the newest being Hyenas and African Painted Dogs (both added with the addition of Night Safaris in 2016). 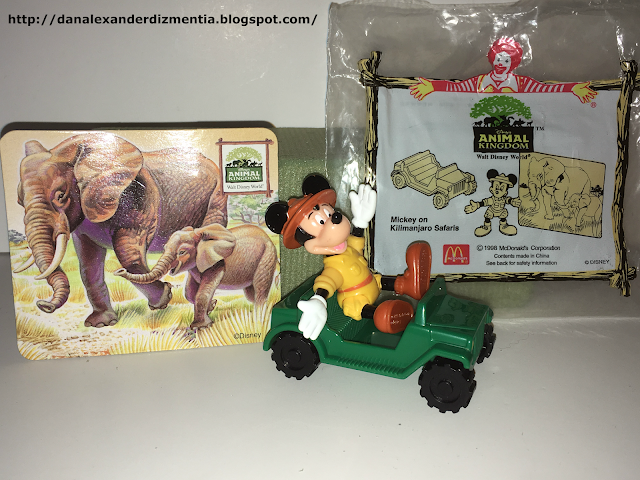 I first visited Disney's Animal Kingdom in 2004.  At the time, I wasn't a big fan of the Safaris (I thought the poacher story was lame).  In the Summer of 2017, I visited and couldn't believe the dramatic changes (for the better) that Kilimanjaro Safaris now has.  It is definitely my favorite attraction at Animal Kingdom.  What made it so great, I think, was that a massive storm hit while we were on Safari.  The animals were very active, with giraffes galloping at full sprint for cover under a section of tall trees.  There was something very "animal" about it.