Disney's The AristoCats At McDonald's 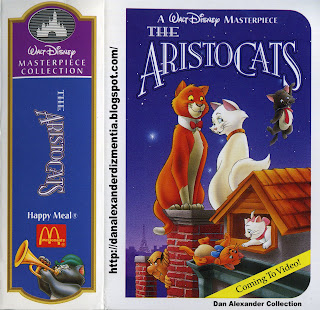 The AristoCats (which debuted in 1970) seem to have more than nine lives, and that probably has to do with the fact that they are among the rare Disney cats that aren't villains.

Though many Disney characters that debuted in the Seventies seem to have faded away, The AristoCats keep going. They have also appeared at McDonald's as Happy Meal toys.

Rather than use Duchess or O'Malley, McDonald's chose to use Scat Cat for a 1995 Disney Home Video VHS box promotion. Remember VHS tapes? The articulated Disney movie figures in this set each had a gimmick, and Scat Cat's was a cloth stomach. Scat Cat should not be confused with M.C. Scat Cat, the animated feline that danced with Paula Abdul in the "Opposites Attract" music video many years before American Idol. 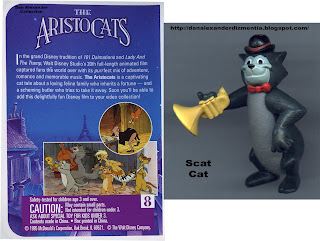 Scat Cat's voice was provided by actor Scatman Crothers, who appeared in the film "The Shining" and was the voice of Hong Kong Phooey the dog in the Hanna Barbera series of the same name from the 1970s.

In 1994, The AristoCats were featured in a Happy Meal in Europe and probably other places in the world, but not in the United States. 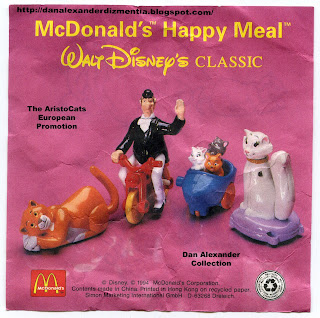 Because of the different languages in Europe, "The AristoCats" was not printed on paper toy inserts like this one. I know from my high school Spanish class (where we saw a movie poster for this cartoon) that the film is called Los Aristogatos in some countries.

The O'Malley toy moves forward and rolls over when you wind up his tail. Duchess moves her head and paw back and forth when you push her forward. 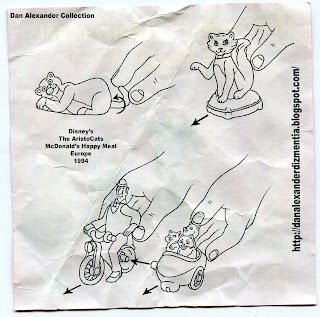 Edgar and his motorcycle connect with the Kittens in the sidecar.

O'Malley the alley cat was voiced by Phil Harris, who also provided the voice of Baloo the Bear in Disney's The Jungle Book (1967) and Little John the bear in Disney's Robin Hood (1973). 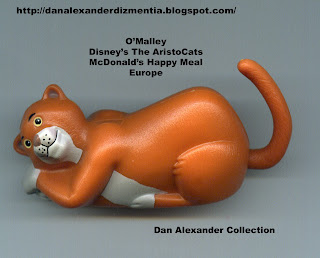 There was a DVD sequel planned for the AristoCats, but it was never made. Since John Goodman played Baloo in The Jungle Book 2, I wonder if he would have provided the voice for O'Malley, too.

Are you able to dance like Duchess (voiced Eva Gabor) did in the "Everybody Wants To Be A Cat" musical number in The AristoCats? Uma Thurman was able to replicate her dance moves in the 1994 movie "Pulp Fiction." 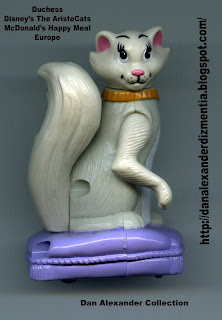 Duchess and her kittens are the mascots of their own AristoCats line of cat food sold in Kroger grocery stores.

Edgar the Butler was pretty tame by Disney Villain standards. 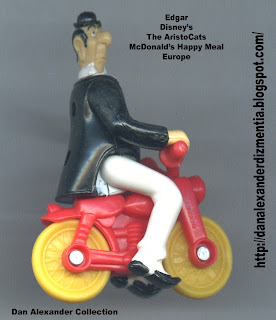 If Edgar had called up Cruella DeVille for advice, he probably could have gotten his inheritance quickly.

Of all the AristoCats characters, the most successful has been Marie. She appears on large amounts of merchandise (sometimes with Minnie Mouse) and is extremely popular at the Tokyo Disney Resort in Japan and at Hong Kong Disneyland. 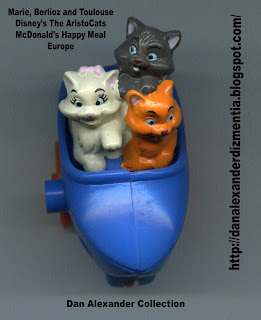 A spin-off AristoCats TV series starring teenaged versions of Marie (a singer), Berlioz (a musician) and Toulouse (an artist), was planned for the Disney Channel years ago but not produced. This would not have featured Duchess and O'Malley, but would have introduced a new, skinny O'Malley -type alley cat named Delancey and a gang called the Street Cats. This show, with character designs by artist Glen Hanson, seemed to be similar in some ways to the "Heathcliff and the Catillac Cats" animated TV series from 1984. 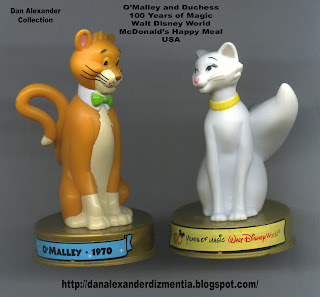 Walt Disney World used to have an AristoCats store in Fantasyland, and opportunities to meet neon-colored, psychadelic members of Scat Cat's band. You can't find those elements in Florida anymore, but you can meet Marie at Epcot (in France, of course!).

O'Malley and the Alley Cats were also part of a joke on Disney's House of Mouse animated TV series (2001), where they were a musical group that was supposed to perform at Mickey's club, but they kept getting cancelled at the last minute. One incident prompted a flustered Mickey to say, "Any idea how angry cats get when a mouse fires them?"

With the popularity of cats on the Internet, maybe it is time to revive that AristoCats animated series idea. Disney could have a sleeping giant on its hands (one that sleeps 20 hours a day).
Posted by Dan Alexander at 1:01 PM