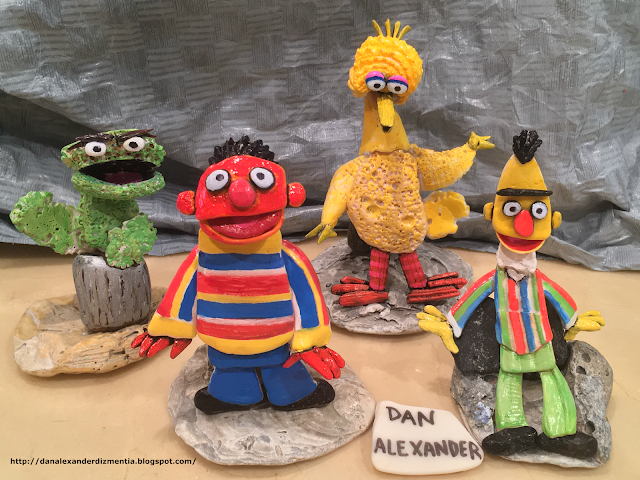 How does one get to Sesame Street?  Well, in Florida, you can find Oscar, Ernie, Big Bird, and Bert in a few different locations.
The biggest bird in the Sunshine State isn't a pelican.  It's a yellow Muppet. 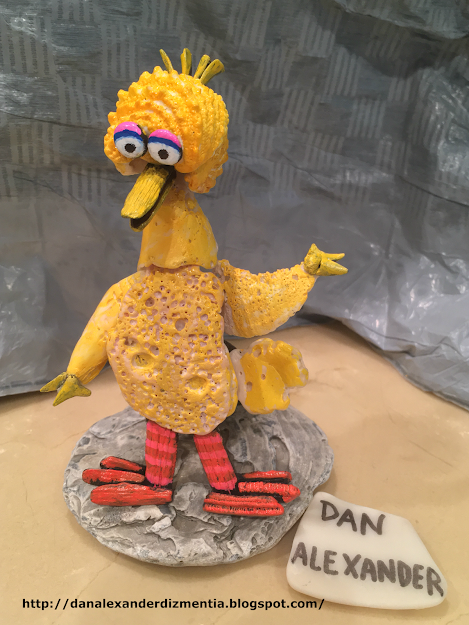 Big Bird is one of the latest sculptures I've made using materials I've found on the beaches near my home in Venice, Florida.  Here in Florida, the Sesame Street Muppets can be found at Busch Gardens in Tampa (Sesame Street Safari of Fun, opened in 2010) and SeaWorld in Orlando (Sesame Street Land, opened in 2019).  While these are relatively new additions, Sesame Street is no stranger to theme parks.
The very first Sesame Street theme park, Sesame Place, opened in Pennsylvania in 1980.  The small play park, operated by Busch, eventually morphed into a (still small) ride and water park.  Eventually, Sesame Place started getting cross promoted in materials for its sister Busch Gardens and SeaWorld Parks, appearing on brochures, shopping bags, and eventually in the form of small "lands" with attractions and shows. 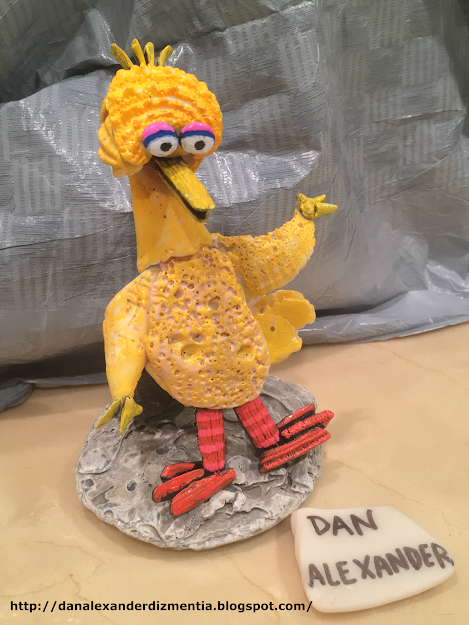 A second Sesame Place is coming to San Diego in 2021 (replacing the existing SeaWorld Aquatica water park.
While Big Bird is no longer considered the main character of Sesame Street, the endearing modern day feathered dinosaur is still the mascot for Sesame Place parks.  For now.
Big Bird's best buddy is Mr. Snuffleupagus.  For many years, quite a few adults on Sesame Street thought that Snuffy was an imaginary friend that Big Bird had made up (because they never saw him). 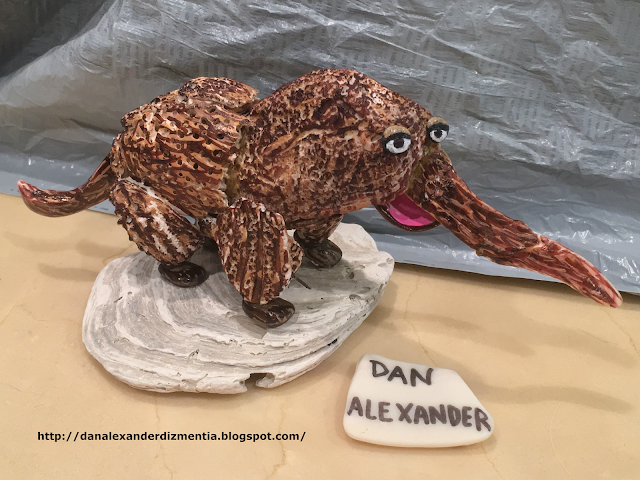 Snuffleupagus started appearing at the Sesame Place theme park in Pennsylvania fairly recently.  He has also appeared at Busch Gardens Tampa, where he has his own ride called "Snuffy's Elephant Romp" (featuring Muppet Elephant ride vehicles) in Sesame Street Safari of Fun.
Grover is a rather super monster on Sesame Street, and in the world of theme parks.  Grover (and his alter-ego, Super Grover) has his own high-flying roller coasters at Sesame Place, Busch Gardens parks, and SeaWorld parks. 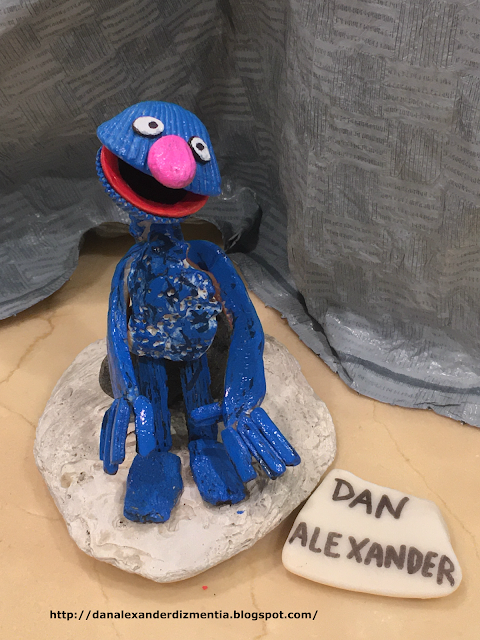 Grover was sort of the original "breakout" Monster character of Sesame Street.  Before a certain ticklish, crimson-colored Muppet took over the spotlight.
Sesame Street airs all over the world, and often features localized characters.  These international Muppets used to be showcased in Sesame Place at a ride called "Grover's World Twirl".  One of these characters was Nimnim (which means "Tiny") from the Egyptian version of Sesame Street called "Alam Simsim". 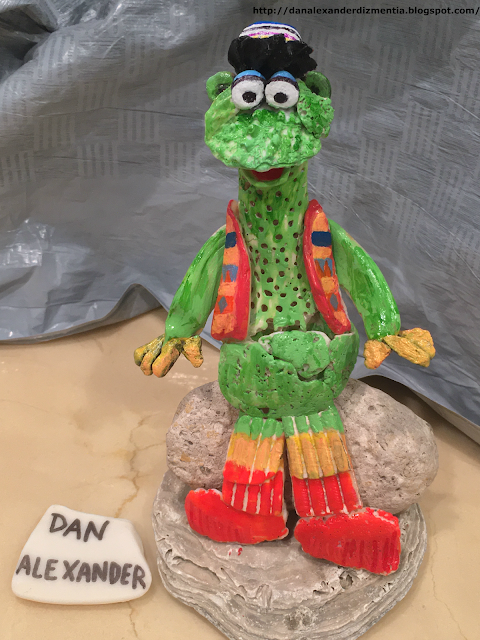 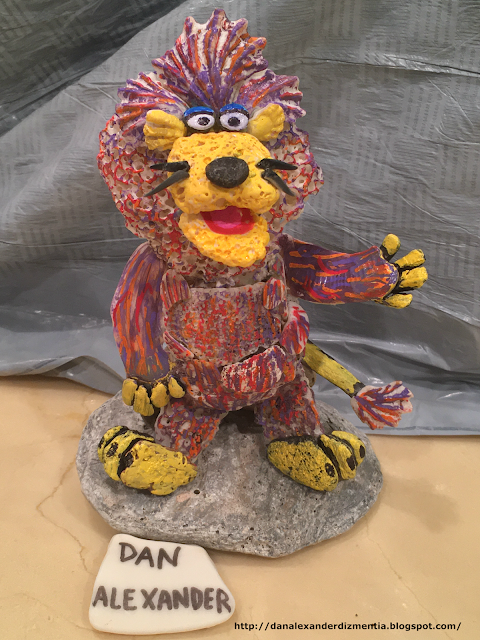 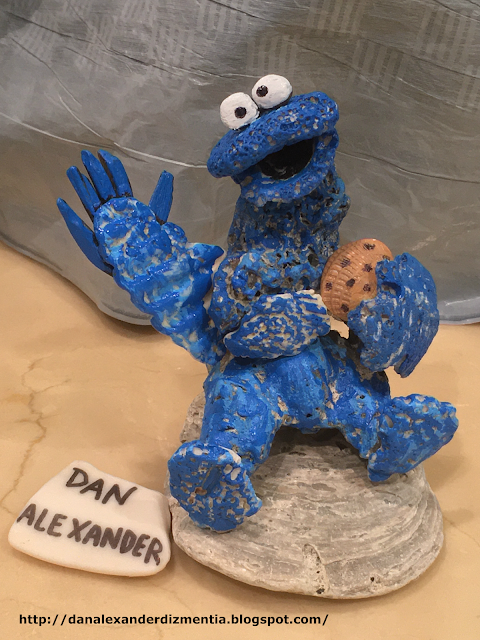 Me want Cookie!  Me from the beach, so me want Pecan Sandie!
Bath tub loving Ernie is the go-to guy for interactive water play elements at Sesame Place and the Sesame Street lands.  Whether it is a fountain, water slide, or wave pool, Ernie is ready with his rubber duckie. 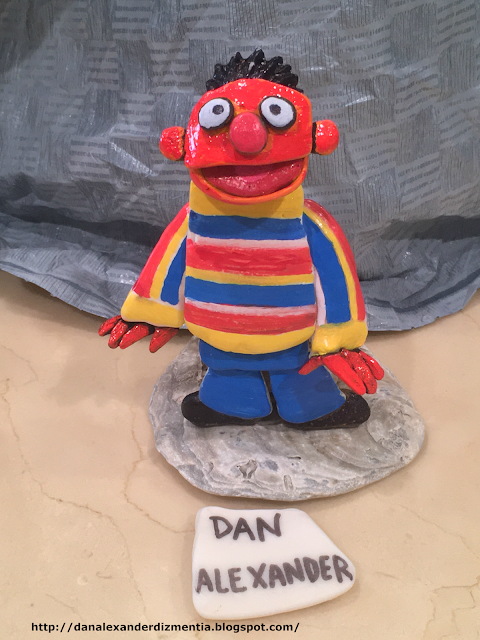 Of course, the giggling Ernie was first performed by Muppet founder, Jim Henson.
Bert would be happy to know that there are indeed pigeons on some of the beaches in Venice, Florida. 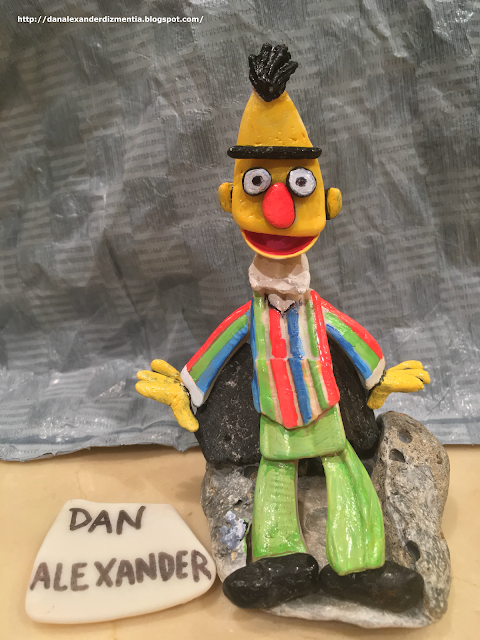 It's kind of crazy that the original performer for Bert (Frank Oz) would later become a director for some wild films like Little Shop of Horrors and What About Bob?

I also made Oscar the Grouch.  He's created using genuine sea trash, like bits of coral and sharkteeth. 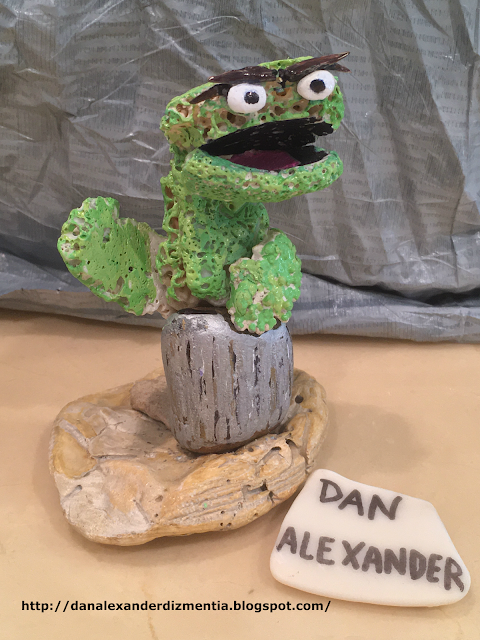 Sesame Street's resident bad boy got his own wooden roller coaster, "Oscar's Wacky Taxi"
at Sesame Place in Pennsylvania in 2018.

Oscar and Big Bird were both performed by puppeteer Carroll Spinney.  Oscar's character was inspired by a taxi driver that Spinney encountered. 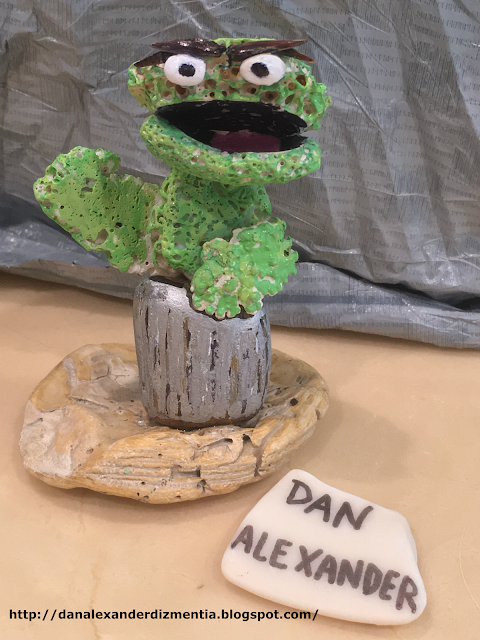