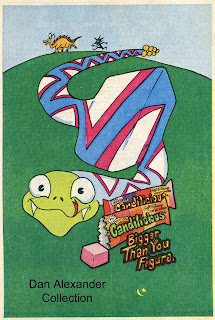 This ad for a candy called Candilicious is from a 1989 Alf comic book.  Candilicious was a chewy candy that I never tried, and was not a big hit, but the animated commercial is something I do remember.

Animator Sally Cruikshank let her imagination run wild with this creative ad.  She was responsible for main title animation in a number of live action films, including "Ruthless People" and "Mannequin."  She also had some cartoons featured on Sesame Street, like "Your Feets Too Big."  Sometimes her work has a dream-like or nightmare-like quality that is fascinating.


I have lost count of how many times I have played this commercial.  I love the song!
Posted by Dan Alexander at 12:41 PM