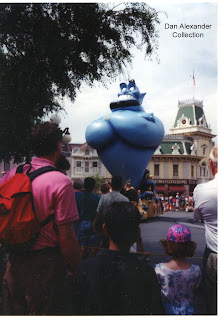 During my trip to Disneyland in California in 1993, I got to see a great parade based on the 1992 Disney animated hit film, Aladdin.

The day after I saw this parade, I got to visit with Disney Archivist Dave Smith at the Walt Disney Studios.  What a fantastic trip!

Aladdin's Royal Caravan was based on the "Prince Ali" segment of the film, which was ideal for a theme park parade. 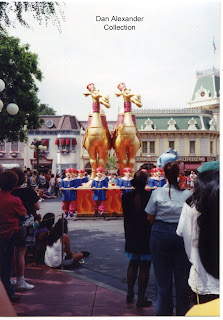 The camels on this float turn their heads and spit on the crowds of people.  These spitting camels (or copies of them) became part of the decor for the Magic Carpets of Aladdin ride in Adventureland at Walt Disney World's Magic Kingdom in Florida in 2001. 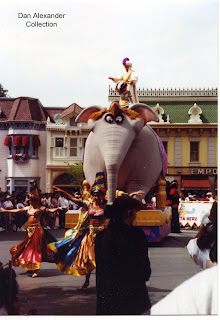 For the finale, Aladdin (as Prince Ali) and Jasmine wave at everyone from the top of a large, impressive puppet of Abu as an Elephant.

Aladdin's Royal Caravan was great fun, and could also be seen at Walt Disney World in Florida at The Disney MGM Studios.
Posted by Dan Alexander at 1:09 PM